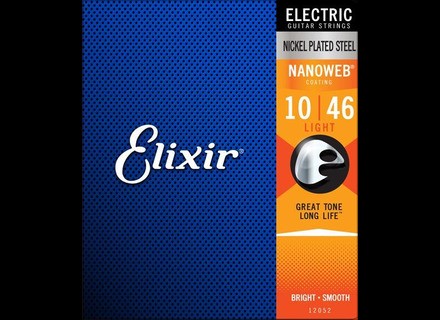 Elixir Strings Nanoweb Coating Electric
4
Since nowadays I play so many guitars my personal guitars have to go long times without maintenance. I recently decided to try out the Elixir coated strings the Nanowebs and the Polywebs. I used two guitars and equipped them with each of the different types of strings from Elixir to test out the longevity and tone from the string with the different methods of coatings. The Nanoweb strings seem to be the more natural feeling of the two sets of strings. With the Nanoweb strings each little thread of string is individually coated then wrapped around the central string. The coating helps prevent dirt and gunk from building up in the ridges of the string. This seems to do a good job and the Nanoweb strings seem to last a 3 or 4 times longer than normal strings. Straight out of the box they do not have the twang and spank of a brand new set of uncoated strings but they retain their brand new tone 3 to 4 times longer it seems. This is the 10-52 set which I prefer. Having used GHS strings for years when I could get them I find that other companies strings are slightly lighter than there in feeling. This could all be in my head but a 10-52 GHS set to me feels heavier than everyone elses 10-52 set. This doesnt really matter as these strings held tune and performed fine with the slightly lower tunings I use. The coating gave them a slightly smoother feel and string noise was slightly reduced as well. These strings cost twice as much as regular strings but since they last 3 to 4 times as long you still end up saving money if you switch to these Elixir coated strings. If you are looking for coated strings that still feel close to what regular strings feel like these strings may be for you.
Did you find this review helpful?yesno
»

deozza's review (This content has been automatically translated from French)" Magic!"

Elixir Strings Nanoweb Coating Electric
5
I no longer use these strings to ... They are simply magical. Before my strings broke after 2 weeks there even after six months I still have no case.
The touch is very nice, always slippery. A marvel.

Elixir Strings Nanoweb Coating Electric
5
I use these strings for several years on almost all my guitars.
Before attempting the Elixir of trying I have more or less everything that was in the store and then on the web.
It is clear that their life is quite exceptional, at least 6 months.
I also like the sound with the treble a bit recessed (not bad for a telecaster twangy enough already).
There certainly are a guitar or other cordent ensure, in my humble ear, an optimal (eg super bullets on a strat), but they provide not the same playability or increased longevity elixir.
At prices we can find for ~ € 11 thoto in the game, which is only 25% more expensive than (horrible horrible) Dean Markley game store.
It's still more expensive, but I find the quality / price quite exceptional!
Did you find this review helpful?yesno
»

WiR's review (This content has been automatically translated from French)" For me it works! But for you? ..."

Elixir Strings Nanoweb Coating Electric
5
I am quite satisfied with its strings.

Before I used Ernie Ball 10/46. I tried to put her on one of my Elixir scratch (my main guitar).

This must be several months that I have and they are as bright as my Elixir strings after 2 hours of play! (No I am not exaggerating!).

The treble strings tend to get dirty faster. But simply by cleaning (ie just remove residue once, without going on the ropes, quickly) they take really.

For what is serious, they are still shiny and new sound! I noticed on a recording where I hear this sound a little slamming new ropes (I do not know if you know what I mean, it's a sound as if the rope curled a little).

In short, I thereto after it is true that it is expensive.


At the moment I'm waiting for that break change. It's been awhile since I had not done that =)!


BUT: I have a friend who sweats a little less hands than me and yet Elixir do not match him at all because apparently they oxidize quickly. It went on Ernie Ball Titanium I think.


CONCLUSION: I therefore advice to try once, if like me you have problems with strings that oxidize 3-4h A test game!


Good music anyway, and do not take yourself too the head with it ^ ^.
Did you find this review helpful?yesno
»
Read the 35 user reviews on the Elixir Strings Nanoweb Coating Electric »