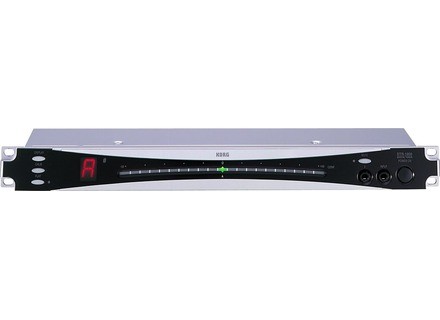 Korg DTR-1000
5
It's a grey tuner with one front and one rear input jack, large tuning meter and bright LED's to show the note name. It also features a mute switch for muting the onboard output if you decide to run it in your signal path, a flat switch for tuning down, and a calibration switch for setting A to something other than 440Hz. Last but not least, the display switch switches the tuning meter back and forth from strobe to cent display and back and forth. As a musician, I've played bass and piano professionally in bands, for musicals, and for orchestras for around 12 years now. I have yet to really figure out what my genre or style of choice is.

I got it used for $100 because the band I was in was going on a national tour and I wanted an accurate tuner that wasn't going to be another pedal on my already crowded pedal board. I also didn't want a tuner in my signal path. Sure, that's being picky with tone, but some tuners can be quite noisy as well while they're at it. So I knew I wanted a rackmount tuner that could simply run off of the Tuner Output on my amp head and stay out of my way. Also, the strobe display looks really awesome when you aren't playing, beacuse all the lights go crazy.

I needed an accurate tuner, and this is accurate to within 1 cent in either direction, which is good enough to be almost beyond human ear detection. Only Peterson has more accurate tuners than that. Still, it's very good for what it does, and I like the ability to switch to a strobe display for further tuning accuracy. I also like the input setup. I can choose between plugging in in front, in back, or running it in my signal path from either input. There is also a mute switch and a jack for a footswitch to control the mute on board.

I haven't found any dislikes as of yet. If I had to be really picky, and I do enjoy being picky, I'd like to have a feature that heard and matched the pitch of an instrument you were playing with (so that you knew when to tune to A at 440 Hz and when to tune to A at say, 436 Hz). These situations largely only come up in orchestra, chamber ensembles, or in folk groups with instruments that aren't easily tuned or that don't tune to 440Hz or don't tune at all (such as a penny whistle). Still, in these situations you can usually use your ear to tune with them, but it would help to have a tuner that made the relative adjustment for you, found the new root frequency, and allowed you to tune from there. (UPDATE! The Korg DTR-2000 allows you to do just that with a microphone input)

Solid unit that does exactly what it means to do well. I call that a success. I also can understand why it's the standard among most touring guitar and bass players. 5 stars.

Korg DTR-1000
4
The Korg DTR-1000 is seen in both guitar and bass rigs everywhere. Korg has produced many tuner models, from simple handhelds to pedal tuners, and this unit caters to those with rack rigs. The DTR-1000 features +/- 1 center accuracy, one space rack mount enclosure, settings for custom tunings, standard ¼” input in the front and back of the unit for convenience depending on your setup, and a mute that can be triggered via standard ¼” switching. The display is very big and bright, making it perfect for tuning on stage at a distance. The tuner responds quickly, and tracks the low ‘B’ of a 7 string well, so one will have no problems with drop tunings either.


I don’t know if it was a problem with the signal in my specific setup, or maybe my specific tuner (I bought it used), but I seemed to have a hard time getting my strings perfectly in tuner with the unit. Notes would always land barely sharp or barley flat, and I can’t seem to get things dead on. It was not a problem with my guitars or their tuners, as I use USA PRS Guitars, and have never had this problem before. I simply used my ears for the final tine tuning, as this unit was only a reference tool for quick tuning on stage.

For live use and quick stage tuning, this is a great unit. All it takes is a quick turn to your rack to check tuning, and you are back rocking with your audience. Though there are more accurate tuners, its visibility at a distance on a dark stage is a big plus. The logistics of wiring were well planned in the design, allowing easy integration in your rig. I would not recommend it in applications where the utmost accuracy is necessary, such as setups and tech work.

Korg DTR-1000
4
I have this tuner for several years in my rack, connected directly to my amp head via a dedicated output. This is a luxury that I would find it hard to pass me now.

The range of tuners rack is not particularly extensive, the choice was quickly made, it is very accurate and does not like its big brother the DTR2000 a bunch of functions a bit superfluous. I do not understand why these two models are no longer marketed.
However, before putting on the table over a hundred euros for a tuner, I thought about it twice.

With experience, however, I would do this choice, as a practical point of view it is really the foot pedal no additional foot, so no loose cables and the tuner display height eyes, it is the foot. Only downside, if I want to tune silently, I am obliged to go to mutate hand amp. But ...

Another practical detail, it is shallow and in fact I've just put it over my head in the rack as it did not interfere with the breakdown of it.

In +:
- Easy to agree / to quickly re-tuning without having to unplug everything each time
- Good quality lighting
- Mute
- Possibility of granting in Eb / D etc. ..

In -:
- Not super accurate (compared to the peterson even if it is not actually the same price range), the loupiotte still moves a little
- Not super clear, I notice a small loss in my sound

I bought it used a very good price and for an amateur, it's a good price / quality ratio. For a professional or someone very picky with the tuning, I advise to ogle Peterson.

Did you find this review helpful?yesno
»
Read the 6 user reviews on the Korg DTR-1000 »