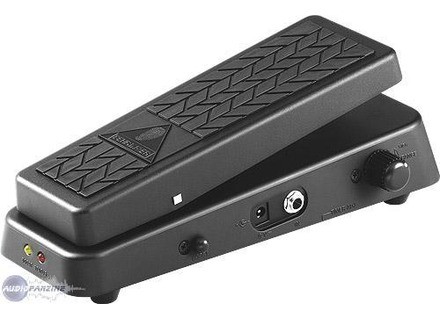 Behringer Hellbabe HB01
2
The Hellbabe Wah pedal has a typical nine volt power supply, one regular output and one bypass output. It's got a "Boost" that adds an extra "umph" to the output. This level is controlled by a knob on the opposite side of the pedal. It also has a "Q" knob and a "Fine Tune" knob. These control the width of the wah and where it sits on the frequency spectrum. There is also the large "Range" knob that pretty much does the same thing but on a more general level for quicker adjustments.

All of these sound like great sculpting tools and an opportunity to really dial in that perfectly sought after tone.
But I don't get it...
It's a wah...
I got it because I wanted a WAH pedal. Not something else.

Unless something crazy or extremely subtle involving a "controlled phase effect" is desired, Just get something else. Wah wah's are simple and should have minimal controls. This seems like it's got a great thing going with the controls(they are pretty minimal) until you realize just how much time you are spending trying to find a "plain wah" sound instead of these wacky "controlled phase effects" that generally end up coming out of it.

It is quite heavy in weight and quite durable. My Hellbabe has taken such a beating over the years that it looks like it really has gone through the fiery pits. I had to glue a knob back into place, once. But for it to still work fine electronically is impressive.
And it's all plastic.
That's heavy duty plastic.

It's spring loaded. I like a wah that I can set with the footswitch, personally.
The sensitivity of the bypass cut off is also weak or strange. As soon as the pedal is compressed enough to turn on, it almost sounds like a break in the signal occurs. No good. You can adjust it with a screwdriver, but I really can't understand why they wouldn't just set that right in the factory.

The sound effects editing is super easy to do and understand. The only problem is that it's too time consuming if you've already got something specific in mind. It's fun to use if you want your guitar to sound insane and silly. I do not trust the pedal to provide the same tone or effect at every gig. I never use it live. Unless... again... I just want a silly sound effect. It definitely, "wah wahs". But I guarantee it'll be in the wrong sp

It definitely, "wah wahs". But I guarantee it'll be in the wrong spot so often that it isn't worth it. I was playing this pedal and the Cry Baby back to back before this review. I was using a Schecter Diamond Series and a Marshall Combo. The Cry Baby sounded like the Wah sound that I desired. It took about 30 minutes, but eventually, I could make the Hell Babe sound almost as good. Almost.

If you want a Wah pedal because you like Wah pedals, save up 30-40 dollars more and get a cry baby. They are in the same price range and are far superior. If you have some cash and you just wanna blow it on a new toy, I would say that this is a great toy.

high_ligh's review (This content has been automatically translated from French)

Behringer Hellbabe HB01
4
Optics avoids the mechanical noise which is really well seen by the manufacturer, I use it for a long time but no level adjustments for any worries.

For buttons is not clear however its used for certain, easy to use, I use it with my guitar and my Zenox Cort acoustic guitar it goes great.

It does not really work in the bass. but for the impeccable treble.

I use it for 2 weeks, I have never had a wah before, I like people have a choice of battery operation or sector, that price was the right has a very good quality for the price I repeat that choice I think.
Did you find this review helpful?yesno
»

kip'on's review (This content has been automatically translated from French)

This is an inexpensive wha pretty good bill that will suit those who want to try this, the main advantage - and why I bought - as the pedal is suitable for a bass or guitar. But as' buy wha, I advise you to rather cry baby conomiser for example (depending on your playing style of course).
The sonority is acceptable, but the problem rel this pedal is that it does not possde true bypass: When ADOPTED effect, the sound and dnatur dgueulasse nothing do with the sound of the guitar plugs directly into the amp ...
I do not have that choice.
Did you find this review helpful?yesno
»

Ok, this is plastic, but hey, the sound is up to what we expect this kind of thing, you can choose your frequency range, there's a boost and is not greedy in batteries.

The sound pierces well the rest of the group when starting in chorus, this is what is asked.

I had Morley (too big), Cry Baby (expensive and rather weak).
30 balls for the fact that serious.

Did you find this review helpful?yesno
»
Read the 17 user reviews on the Behringer Hellbabe HB01 »