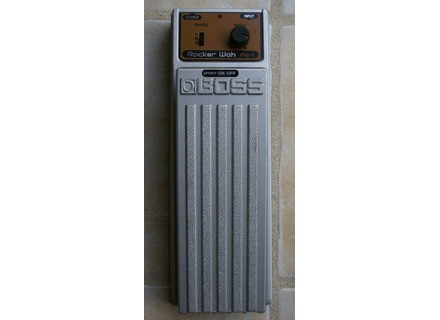 Boss PW-1 Rocker Wah
5
i got this from musiciansfriend.com for a hundred somethin. not to expensive for such a great pedal.

its kind of hard to figure out but when u do its going to blow u away.

its boss what else should i say

get it. im telling u people its the best wah in the market nuthing compares to it. boss offers so much to there buyers with products like this. you wont want to stop playing this thing

cornelius's review (This content has been automatically translated from French)

Boss PW-1 Rocker Wah
5
I dnich the pedals on a clbre enchres site for thirty euro a few weeks ago. In dballage, I immediately find something surprising: tui in a soft pedals like a bridge of the river Kwai (about 33cm), and obviously Designed to rsister all (case mtal all fawn Leclerc, named after the gnral and its division of blinds). In APRS the serial number, according Bossar, the pedals in 1981. Food lctrique MRIT a note: PDAL operates on two batteries average 1.5 V. .. 9V or AC adapter. Will understand, Charles ...

So then you plug it all and we must reconnatre that's not bad: you can choose from 3 ranges frequency drives (High, Medium, Low), and can rgler amplitude the effect with the large button on the right. In my case, position the bottom knob Medium and produce the sound I prfre, I think the most equilibrated.

For a long fight against osteoarthritis of the right ankle with a Dunlop JH-1, the control of the PW-1 was surprised by its low trs race. In fact, it's a matter of habit, and not really a inconvnient.

With regard to the sound wah, in my view, clearer and less rough than the above-mentioned Dunlop. The possibility to choose the range frequency drives is my opinion a more even if my choice was quickly stopped the High position is a bit noisy, and as you might expect, the position Low a little deaf. Can be due to the short stroke, the change in tonality is not huge, even if the wah is Submitted. I must say that I have tested a Boss AW-3 (auto-wah), the wah is duly, without being provided always exploitable.

In the end, I find that pedals really pleasant. Having paid little expensive, the report qualitprix is ​​unbeatable. Obviously, this is less popular pedals, and less than rpandue Dunlop. If you find one for cheap, go for it: I doubt you're from. I put 9 / 10 and not 10 for its design could be improved, but I'm even happy trs.