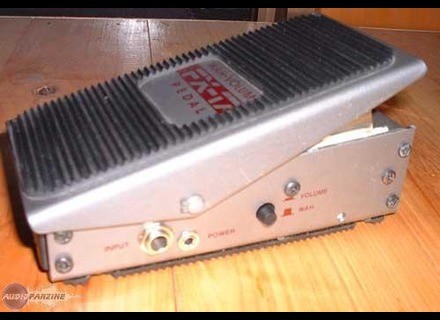 DOD FX17 Wah/Volume
5
This wah is not new. It dates from a few years now ... but it is not rare to find sales on a famous site enchres online.
So what is it worth?

- Made in the USA
- Analog
- True bypass
- Optical switches dtection
- Electronic switch under the heel!
- Switch to select latral wah or volume pedal
- Powered by 9V battery or sector, but with an atypical form mle ...
- Variable output voltage supply via the rocker (what utility ???)

Solid construction, modern technology, this wah inspires confidence, without being a work of art, with a small ct "crude dcoffrage."

Here is a small pedal !!! Almost to the size Boss !! In short size for the Smurfs. Surprising departure, especially with his switch disposed under the heel !!
But this is not the only peculiarity of this pedal.
The mains power supply is via a plug mle unidentified. In short I prfr opt for 9V battery.
The rocker possde a graaaaaande VERY amplitude. And given the small size of the rocker, hard excuter prcis of movement.
For the rest, this rocker remains pleasant. The stiffness is class and remains sensitive and progressive.
To switch the wah volume effect, a small switch is disposed on the side. The pedal is lightweight and it is quite difficult switch trigger without dplacer the pedal.

In short, an original format but difficult apprhender foot.

Moving quickly on the mode volume, which is not his strength. A correct volume pedal but with losses in the treble.

For wah, this effect is very typ. The beach is laaaarge frequency drives scans. The wah effect is spectacular (the Q factor should be enough lev. Being given the small size of the scale, it is very difficult to do in finesse. But if you are looking for a VERY pronounced wah indeed even vocoder or spcial Indeed, this is all done wah says.
So for the funk and bizarre effects, yes. For blues, no.

The advantage is that this wah is doing with honors with a big distortion, even up upstream of the distortion. For the metal, the efficiency is at the rendezvous, while keeping much of warmth and character.
For funk, handle delicately the rocker at the risk of completely mute cheeks notes. This pedal also very well accept the bass.

Wah that is no longer built but is available quite easily, even new, via internet.
Wah very kind, modern but warm sonority. For a dramatic effect very !! Warning, this wah is not in half measures, and very futuristic look is perfect its sonoritsimpressionnantes.
A great pedal that comes out of the box, for connoisseurs.
Did you find this review helpful?yesno
»

purple.telecaster's review (This content has been automatically translated from French)" worth trying."

DOD FX17 Wah/Volume
5
hello,
90-year's
-Made in USA
Wah wah-one who is not a Dunlop or Jen, or RMC, etc. Colorsound or crackles that not surprising? (Except Morley)
-Small
Robust-style "Rat"
So a system-x? Y? Z? Unique and durable
-Many (too?) Opportunities
Little use volume (black button side IN)

It is a good Wah who request to be controlled, which is tested in a shop 3mn chrono

it goes with x and xx guitars, a real "Swiss army knife" without spitting!

this is one of the wah is that I keep for 10 years
I'm not a pro Wah but it pleases me,
However, it deserves to be mastered (this would be the inter m / heel) but also there are two mini pots (two holes in the front), which allows the "Q" (that's good!) certainly must be sought after but .. is Good and there among other Youtube
sometimes criticized as little known and (certainly) requires adaptation.


ps: there are two original rubber bumpers under the front of the shoe and I put two others in front which reduces a little race.

DOD FX17 Wah/Volume
5
Wah this is not entirely new. It is a few years now ... but it is not uncommon to find for sale on a popular online auction site.
So what is it worth?

- Made in USA
- Analog
- True bypass
- Switches to optical detection
- Electronic switch under the heel!
- Switch side to select the wah or volume pedal
- 9V battery power or sector, but through a plug atypical ...
- Output voltage variable power supply via the flip-flop (what value??)

Solid construction, modern technology, this wah inspires confidence, while not a work of art, with a small side "rough around the edges."

Here is a small pedal! Almost format Boss! Short cut for smurfs. Surprising at first, especially with his switch located under the heel!
But this is not the only feature of this pedal.
The power sector via the Internet through a plug unidentified. In short I opted for the 9V battery.
The rocker has a VERY graaaaaande amplitude. And given the small size of the scale, difficult to execute precise movement.
For the rest, this rocker is nice. Rigidity is well calibrated, and it remains a sensitive and progressive.
To switch from wah to volume effect, a small switch is located on the side. The pedal is light and the switch is quite difficult to trigger without moving the pedal.

In short, an original format, but difficult to grasp the foot.

Fast forward volume mode, which is not his strength. A volume pedal correct but with losses in the treble.

For wah, this effect is very distinctive. The frequency range is swept laaaarge. The wah is spectacular (the Q factor should be high enough). Given the small size of the scale, it is very difficult to do in finesse. But if you want a VERY pronounced wah vocoder, or even special effect, this wah is quite appropriate.
So for the funk and weird effects, yes. For the blues, no.

The advantage is that this wah is doing the honors with a large distortion, even placed upstream of the distortion. For metal, the efficiency is at the rendezvous, while retaining warmth and character.
To funk it must be handled gently rocking the risk of completely mute the notes played. This pedal also agrees very low.

Wah that is no longer built but still quite easily available, even new, via the Internet.
Wah very distinctive, modern yet warm tone to. For a very dramatic effect! Be careful, this wah is not in half measures, and its futuristic look is perfect for its impressive sound.
A nice pedal off the beaten track, for connoisseurs.