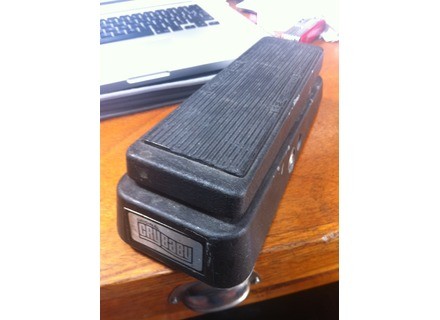 Dunlop Cry Baby Vintage
2
I needed a new wah pedal and I wanted to get one for cheap. I actually bought this one from my bassist's brother. I bought it for a cheap deal of $25.00.

I hate having to press the expression pedal down so hard all the time to turn it on. The signal will also stop sometimes also when passing through. It is also quite heavy for a wah pedal of its size too. The wah sound itself is rather bland, it goes from bassey to trebley too quick when switched.

It is heavy, yet it does hold up quite well for being a Dunlop. It has not been chipped yet which is good if I decide to trade it in sometime.

The bottom line is don't settle w/ this wah pedal if you want REAL quality. Go w/ a Morley, in my opinion MORLEY makes the best wah pedal.

Grégoire Terrier's review (This content has been automatically translated from French)

Dunlop Cry Baby Vintage
4
Wah could not be more simple: in, out, switch that snaps into force when the pedal is at its lowest. Rather heavy but indescructible (I use mine for over 10 years without setting other than the grease from time to time if it makes a little squeak squeak very unpleasant for 1 year)

Usage is simultaneously easy and difficult:
- The simplicity of the pedal is a good point, we spend more time playing and take the lead on the settings.
- The switch is on some wah wah (including mine) that are particularly difficult to engage.
You really put all his weight on the forefoot, off limits and the other barely exaggerating. To the point that when I play seated, I engages in hand. This defect is not at all recurring cry baby, but it's really a big flaw on mine

The only sound is really very beautiful and very "transparent" if it can be said for a wah wah:
- In his clear, the instrument is very well respected, not too aggressive in the extreme and at the same time can cover a wide range of frequencies. Position on a telecaster acute, the sound of the guitar by John Barry James Bond Guarantee, or great for a little pot of roots reggae.
- In saturation same story, personally I put the wah after the saturation to keep compressing natural distortion and thus have a constant noise level.

Attention even when there is no EQ on the wah frequency can cause unpleasant as the tone of the guitar when playing in agreement. If we can correctly control the wah, you can play with the moods, but this is where the simplicity of the pedal to the limit

I use it 10 years now and I think despite all his fault that this is a good product.
I like its simplicity and I do not ... its simplicity.
I think she is around € 115 today (as the cry baby 1999 wah) which is correct, nothing more.
With the experience I would buy a wah or you can set the frequency ranges and with the switch next, even put 100 € more.
Did you find this review helpful?yesno
»