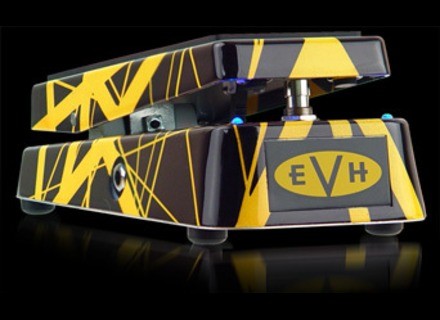 not applicable only effect wha wha!

the record is entirely consistent with the spirit of Eddy

Quite clear stamp located in the mid / treble but with rich body and intelligibité very rare and very musical.

It seems marry more with overdrv or distortion, although if it clear that music must,


As Jc 95 that I have also, I come to you to tell you my impressions deeper clean on its effect

No, I was on the website Dunlop, I told myself that I had the

it was designed to go in a frequency band mid / treble but with a total capacity of all but aggressive and unprecedented cry baby classqiue by nrendu so hyper melodious and musical in the category Wha wha.

Ideally we would have liked to have a high bandwidth as jc95 with Vh effect on the spectrum, this is why these two are fully complementary

R / Q / P is excellet is not given but excellentissime NOHD I remake this choice indeed.

Dunlop EVH95 Eddie Van Halen Signature Wah
4
everything the previous poster said ...
We need support like a pig on it like the classic Wah

I have long compared with the MC404 CAE, there's no pictures in my ears is above both in clean mode only drive despite two yellow and red Fasel inductor of MC404
Summarizes the sound is brighter more open with a beautiful middle, it's very melodic, there are many notes we not fall into the boullabaisse in drive it goes right in the signal that food not very good light in the lead ... clean pots in the funky in the noise, the sound may seem modern post one likes or dislikes ... I owned the Hendrix wah frankly it's not a wah this thing is more a tool to communicate with frogs lol

I'm not a fan of Van Halen, but his gear it's heavy anyway ... the blow to the CAE MC404 been sold without regret ... a test urgently for those seeking a very good wah