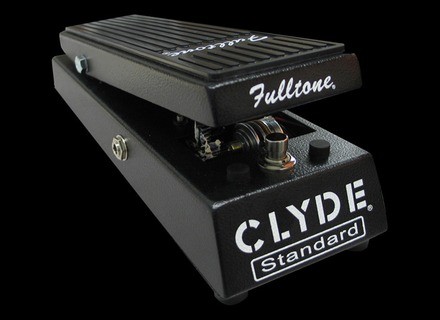 lapo's review (This content has been automatically translated from French)" Voodoo Child!"

Fulltone Clyde Standard Wah
5
I have the first model with black case.

Adapter on the side and can connect a 9 volt battery inside with a small compartment for the battery provided for not taking it that moves
The adapter plug is placed directly on the case and connect the circuit by son, which is good for life.

- When disconnecting, you can hear the pedal to make a little noise when playing with (mechanical sound) (Ma Budda makes no noise)

+ Screw / Rubber can be removed by hand (practice for a quick change of battery.

The exterior and interior design generally seems a notch above the Budda Bud Wah.

If you ever get too turned the knob and it block the travel of the wah, just to make the necessary adjustment.

If you do not understand, you say that the potentiometer is 1 to 10. The stroke of the pedal action 6 so initially it is 2 to 8. By moving the potentiometer to be more keen on grave with control the tone of the wah 4 to 10. If you want the worst possible, it is turned in the other direction and found this to have control over the potentiometer 1 to 7.

I have not changed the setting on mine but maybe I'll put a darker screen.

Welcome to Voodoo Child! As much as I liked my Budda Wah on this song, as it pales compared to the Fulltone. The effect is stronger and now that the Budda. It is also more singing and she has a certain vibe that makes it inspires me when I play.

on the other hand in clean environment and funk she is doing really worse than the Budda is smooth and creamy.

Strengths and weakness compared to the Budda Wah. It's two great pedal located in the upscale. The Fulltone a greater mechanical noise cogwheel system and less fluid low-high transition. Against it by the singing side and the vibe is lacking in the Buddha which is slightly preferred to the latter. Vibe this pedal compensates for these defects and manufacturing quality inspires me more confidence for the long term.

In short, a very good pedal with Mojo, used mainly to Rock and Blues and Funk least.

WiR's review (This content has been automatically translated from French)" Yes ... But too expensive I think ..."

Fulltone Clyde Standard Wah
3
Well now there is a wah.

Racing foot is longer than the average wah (a good)!.

Attention mine is the version with integrated for more fit "fuzz friendly" and help boost the volume buffer.

Inside the circuit is niquel and rather clean.

A little high, not look bad, so at this level it will yeah!


AFTER AFTER HIC: On mine, the pot was really low quality, he had gone a little hard, it hurt a factory job. The pot is also dead in no time. And began to spit even clean a very annoying and pervasive. I had to change. And galley welds because of buffer.

Well I think a Wahwah 200 balls as a wah is not part of the most sophisticated effects, the pot could be good. Because right after dismantled, removed the cover, well ... This is not a pot of super quality. Or a wah with a defective buddy, this is a half wah. So good, good jalopy with an engine of shit farts in good 30,000 km, it serves little to nothing ... (Yeah metaphor sucks but universal).

So then I say thin!

Good at this level, the switch is super simple to initiate, but not too much to snap without purpose.

The playability is really optimal. It is his strong point I think.

Well there you should know: This is very broad: Very serious to very sharp!

So it can sound very modern, it has a rather modern trend. After testing a wah in kind vintage super serious, well the Fulltone is clearly modern, but suffers no loss of volume, it will biiiiien more acute.

So good, frankly, because I went from a Dunlop GCB-95 at Fulltone, as saying that I had a very blah to very good. I was really amazed!

So yes it has a very good sound for its versatility and wide frequency spectrum. The sound is very clean. Ideal for a wah wah studio I think.

BUT BUT BUT HIC I could see: Only remarkable live: Groooos jump in volume when using the wah wah in the clear. Big boost of volume, a really big thing and so we spring for once, too see very well in the mix. In overdrive it does not see a lot less of everything.

So when I use to live clean, I have to temper my attacks and in addition does not fall completely, because acute are still pretty sharp ... So it's pretty annoying that too ...

It's getting a little while I use (about 1 year), it has 3 years results:

- In clean high volume, boost volume unmanageable, acute and piercing the serious overdrive tend to melt but acute emerge much sweeter. That's a wah wah overdrive / fuzz that is some clean ... So I told you not clean with a Telecaster and a super bright amp, bright, live, you kill everyone ...

But overdrive with my Les Pauls it goes niquel, serious fade a bit anyway.

But hey, I still back on it, more than 200 €, it is not expected to have a sound pourrav 'or average. It is one of the most expensive wah market ...

Despite its sound quality does not justify its price. This remains a circuit must not be abused. It is semi-industrial, so does half hand that I understood.

And Made In USA, it is not good because it is made in the USA it is gold, have to say, handmade in the USA I do not see why it would be better than handmade elsewhere. ..


Here, therefore considering the price, I strongly advice to test, and rather hard to see with his sharp sharp!


Hi it's still good stuff anyway if we forget the price

Lvz77's review (This content has been automatically translated from French)" Wow!"

Fulltone Clyde Standard Wah
5
It is inspired by the Vox wah Clyde Mccoy 1967.

We switched by pressing it is relatively flexible I can snap it sitting.

It also has an internal buffer therefore obliged to open the wah settings.
I have not yet grasped the operation, but it must be found that makes it more dynamic and more crunchy or soft and velvety following the setting.

You can also set the hardness of the action via the central screw.

Very easy to use, apart from the buffer that once set do not move, we just take care of moving the foot to get the wah effect.

This is what I wanted.

It can be used in clean, in distortion, crunch (with a terrible delay) with double or single coils.

I can do the funk with my 7 string equipped with EMG and it looks good! So when I hear someone say "I do the same with my cry", I smiled and told me "oh if you only knew."

Saturated it really wah. It may sound simple to say but when compared to its main competitors in the cry is effete distortion and garish light, the morley is screaming is relatively clear and incisive in distortion. The Fulltone is good everywhere.

It opens we see the signature of guy who checked we do not know who it is but it did and it's nice.

White paint with the "Clyde" logo is really beautiful why did a new version in black?

The true-bypass pedal this is the one that made me wonder about the result of my pedals you realize how much you lose the original sound.

Very nice work from home and thanks to Fulltone jimmypage who sold me this pedal.

The Fulltone Clyde wah is a reference on the subject. its tone is one of the purest possible. it is typical vintage vox 60's genre, but slightly different, a voicing a bit more modern, less harsh and dug, the more flowing and musical. it is rather versatile.

I've had two years ago, I like everything about it. I've tried a lot and I am the author of the topic "all the wah wah" on guitariste.com
the price is high quality masi ets with return, solid, never down ....

Did you find this review helpful?yesno
»
Read the 5 user reviews on the Fulltone Clyde Standard Wah »