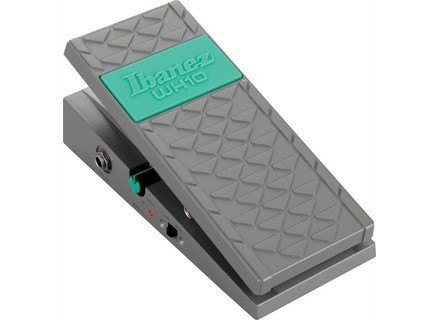 Cet-ampli-la-il-va-jusqua-11's review (This content has been automatically translated from French)" Even when good pedals!"

Ibanez WH10V2 Classic Wah Pedal
4
A Wah in all its glory! Visually it is a ready-made classic Wah pedals, with a Depth knob of the cot for rgl depth effect and a slecteur Bass / Guitar.

A breeze! One branch is obtained directly and the sound is desired. A manual is provided to buy but it is of no use.

One of the biggest default of the pedals is that it does not Truebypass. The Ibanez when it will tend to eat is not on the treble. Personally I found the solution through a Boss compressor before which masks the true bypass.
Once Wahwah Allum found clear mind Frusciante, but be careful, do not have exactly the sound of John Frusciante with. It can be used but remember that it is a rdition and the pedalboard of Frusciante is not just the pedals.
Purely sonic level, it has a tendency to be static when the pedal is opened, but nothing mchant.
I use it with a 1959 Stratocaster and a Fender amp.

I have the pedals for over a year. Before I tried to buy the must-That a Crybaby and Vox, but as a big fan of this great man, John Frusciante I'm tempted by the pedals.
Overall, the report quality price is good because the trs PDAL CHRE is not at all, but we feel that all of the same parts of the pedals could be reworked . It's the only regret I have but I would do without this choice hsiter.