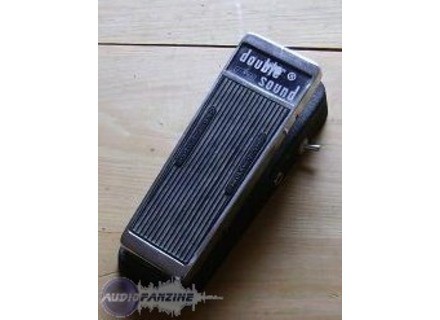 gratte guitare's review (This content has been automatically translated from French)

JEN Wah Fuzz
5
Wha wha pedal switch using a switch or whawha alone or whawha + fuzz.
The filter is controlled via a knob that rotates via a gear rack +.
No optical system.

I bought new in 1971! She never dropped except the switch that I replaced in 2006! Even the knob is original.
Only regret, no power jack.
But as I head up in the cascade effect, and the signal to noise ratio depends on the first element of the chain, being battery powered, guaranteed
a lack of hum and thus optimum signal to noise ratio.

Wha position without fuzz, it can sound very funky.
Followed by a tube distortion Français muff'n the sound becomes grandiose.
Hendrixien, Ledzepien, ACDCdien etc ... and this on a Twin reverb!
I utillise as well with a Start / Super Start or Gibson.

Fuzz position, the sound is interesting, but lacks punch.
Fuzz for a good sound, I set the gain Français muff'n with minimum or
9 am and the sound is less grim Fuzz and style "
Satsifaction "Stones.

Preque position at the top, it sounds very Black Sabath

What about ... after more than 35 years of good and loyal service! I strive ....
It does its job and have never tried anything else.
Did you find this review helpful?yesno
»

hammam27's review (This content has been automatically translated from French)

JEN Wah Fuzz
5
This is a wah wah-fuzz pedals of the beginning of the 70s, manufactured by Jen in Italy.
I recall that Jen is the manufacturer of vox wah wah Italian trsrputes (the vox 846 Hendrix among others).
Rugged and lightweight.
By opening, we see a particularly handsome inducer Fasel Red (stamped 500 mH) and two transistors BC107B wah for the part, and a transistor NKT275 in terms of Part fuzz. The ERT is a potentiomtre 100k original.
Unfortunately bought down, I russi that rpar the wah (which is most important to me).
No true bypass the era. Not want to change it

Trs easy to use as you can imagine.

The sound is exceptional.
The original Fasel Red (which has nothing do with the other variation on green, yellow or white and even less with the repetition of dunlop) offers a beautiful tonality, the effect is trs soft and allows a superb vocal expressiveness trs. The curve of the pot is magical.
She is comfortable with all types of attack and sound, but I prfre in funk (in the clear in general). Also with beautiful low in saturation (blues rock).
It enlve treble the original sound so be careful ...
The rating is for the wah sr because the fuzz is out!

I use it for two years.

The PDAL has a unique sound, long lost. But it may be not suitable for all uses, especially my Wahs customize sound much better saturation (transistors?). So for a particular purpose (clear, (+++) funk and blues).

Quality price ratio? the wah Jen, it is forgotten in this era (although built by those provided by vox 846), so you can find for much cheaper than the old vox.

This pedal is very pleasant to use. There is only one thing wrong: I often turn off the wah unintentionally while in comparison, a crybaby you really fully depressed. Perhaps this is due to the age of the machine ...

This is my first wah and that price I could not believe it too but I'm really conquered by the very fact "voice". I used a lot by not cons-wah distortion mode, I found the sound a bit confused, a little too dirty. I therefore used most often in wah mode alone, with the Blackstar HT drive to saturate a bit and there is happiness!

I bought this antiquity (it is 68) in a flea market at 10 € ... I did not know this brand, but I tried the shot, it looks more retro (bakelite, etc.) I liked. I am not convinced by the "dual mode" but it's a very, very good pedal, for me it is a vox or crybaby, and I think she is original in the genre, she typed a sound I do not know if this is the case with other Jen. In short, it was a really good deal ...
Did you find this review helpful?yesno
»