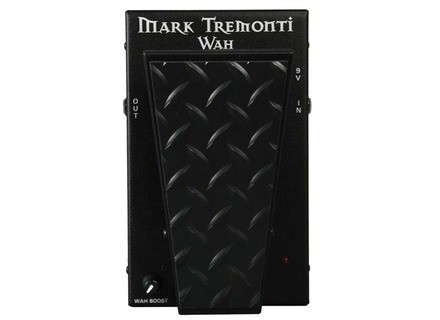 See all 9 classified ads about the Morley Tremonti Wah »

Morley Tremonti Wah
5
A signature offspring of Morley designs, the Tremonti power wah features
-optical switchless, auto-return on and off
-up to 20 dB of boost
-power off of 9 V battery or AC adapter
-standard ¼” in and out for connection between amplifier and guitar

Given its switchless operation, the Tremonti power wah is very easy to use, and especially perfect for live situations. The quick on and off allows one to apply the affect in many more situations, where the typical ‘toe-down’ on/off would prove cumbersome and impractical. Additionally, the optical circuit implemented will never wear, so there is no need to worry of eventual maintenance as with your standard wah pedal. As with all Morley switchless pedals, a trim pot inside the pedal itself allows one to adjust the amount of delay before the pedal shuts itself off. The only downside of the switchless, auto-return feature is that achieving a stationary ‘cocked wah’ sound takes some more effort and a steady foot.

The Tremonti wah provides a very modern and aggressive wah tone. Is has a very wide sweep, which allows a long range of expression. The pedal works great for cutting through with a searing solo in a fat modern rock mix. The boost feature allows one to tweak the amount of cut in the sound, though too high levels can introduce excess noise and loss of clarity. Due to its aggressive nature, the Tremonti wah does not jive well with most clean tones, as it tends to overdrive the signal even with the boost feature completely off.

For those looking for a more aggressive take on the wah than your standard crybaby, the Tremonti is definitely something to look at. It is a great way to take your solos to a new level. Players performing live will love the auto on/off feature-no more accidentally leaving the wah on!
Did you find this review helpful?yesno
»

glassjaw7's review"Switchless wah with a wide sweep. Cut through the mix!"

The Wah features a switchless design which means that the user doesn't have to push the pedal down and click a toggle switch to engage the effect. Just by placing your foot on the rocker pedal and moving it, the effect engages. The rocker is spring loaded and by removing your foot, it returns to its original position and the effect disengages! This is extremely handy in live performances, especially for someone with a single-tracked mind like myself! No more worrying about turning the wah off after your big solo, just take your foot off and you're done!
There is also a trim pot inside the unit that let's you set the trail-off time of the effect.

As if the great design wasn't enough, Morley also included a "wah boost" knob that lets you dial in a predetermined boost value for kicking your leads into high gear and making them sure to be noticed!

The pedal has a built-in buffer circuit that is made to drive long cables and retain clarity in your signal. I'm not sure that I like this feature, as it seems to affect the way that certain pedals react that follow in its signal path. I prefer a hard-bypassed signal, but it's not necessarily a bad thing. Many players don't even hear the effect of the buffer. Maybe it's all in my head!

The pedal runs is powered by a standard 9 volt battery that can easily be accessed by a plate on the bottom of the unit. Just push the latch open and take the cover off for access. An adapter can also be used such as the Visual Sound One-Spot, or Voodoo Lab Pedal Power.

I have to mention that the rubber diamond plate tread on the rocker and the rubber pads on the bottom of my unit actually melted off of the pedal shortly after I bought it...It had been extremely hot and humid in our rehearsal space and my guess is that's what caused it.
I super-glued them back on and they've been fine since, but this needs to be addressed if it hasn't already. I would have rated this section a 10 if not for that issue. That knocked it down to a 9.

Step on it to engage the effect. Take your foot off to disengage. Set the wah boost knob to taste. It doesn't get any easier than that!

I decided to buy the Tremonti Wah because I wanted a unit with an extended range and a sound that would cut through a dense mix. I also liked the idea of the switchless design. I had been playing a Jimi-Hendrix Crybaby and felt that for the style of music I was playing (modern rock/metal) the Crybaby wasn't cutting through, had a very limited middle "sweet spot", and it seemed like the effect wasn't audible when playing bends or legato runs on the high E string. It was as though all of the vocal in between sounds weren't coming through and the sound jumped from backed off to all the way in toe-down position. There was no middle sweet spot in the sweep range. (not to say the Hendrix Crybaby is a bad pedal, it just wasn't for me)

The Tremonti delivered everything I was looking for, and then some! It is voiced perfectly for heavy gain with enough clarity to cut through and remain present at all times, but without fatiguing the ears. The boost is a well thought out addition as it kicks in just a bit more edge and volume. Leads just jump out when using this wah!

Removing your foot from the rocker pedal automatically shuts off the effect, but not before the wah effect trails off for a brief moment. Even with the internal trim pot dialed all the way down for minimal trail-off time, there is still a short delay. This can be a bit annoying when you want the effect to stop at the exact moment you take your foot off of the rocker, but it is a small sacrifice considering the ease of use and performance you get in return.

The other small drawback to this pedal is that the wah sounds aren't made for clean tones. If you're a funk/r&b player, look elsewhere. The Tremonti retains its sharp attack on clean tones and can make them sound shrill. But if you're buying this pedal, you're most likely a rock or metal guitarist and that's what it's made for, so no worries!

The only negatives about this unit I can point out are the cheap rubber diamond plate tread and stopper pads on the bottom, and the buffer in the circuit, which seems to color certain overdrives that follow it in the signal chain.

The Mark Tremonti signature Wah from Morley is an outstanding pedal for the rock or metal guitarist seeking a unique and cutting wah tone with an extremely vocal sweep range. Buy one and you may never go back to the traditional switched design!
Did you find this review helpful?yesno
»

labbeille's review (This content has been automatically translated from French)

Morley Tremonti Wah
5
Effect of in Morley wha: cad photocell, automatic engagement ... prcis and discreet!
plus an adjustable boost to increase the gain and the effect wha ...
But is only the tip of the iceberg submerged!
With a little exprience is mind-blowing stuff out of this simple PDAL wha ...
As the cell is sensitive trs, and the beach trs prcise frequency drives, I Discoveries in TWG by calling one of the feedback amplifier, it becomes gn operator of feedback (you can dcomposer your agreement DIFFERENT feedback ... terrible)!

It is a PDAL Wha Wha ...
In addition it is beautiful!

on the other hand, you mfiez microphones sensitive or low-end ... Feedback horrible blow sr!
I play ESP team in EMG81 and 85 and it is hell!

I have a year and is the total growing!
To all those who want a wha effective, screaming until death ... Precipitation Occurred you!

tibo67's review (This content has been automatically translated from French)

Morley Tremonti Wah
5
Wha family Morley is no switch not rack etc ...
We can therefore move from silence has the effect wha without noise.
Operation level is much more comfortable than a Cry Baby.
Another interesting detail is that it has an important race which has more finesse and feeling that most of wha wha widespread.

As a wha wha the config is simple and the characteristics of Morley are the most convenient and comfortable that I know.

The only suceptible not to unanimity is the sound.
It is less aggressive than my other wah (Dimebag), a little more traditional.
For the solo it sounds more trashy medium.Mais this game depends on the guitarist.
Having a good touch on a lot in his aggressive but will be a beginner can be frustrating.
Now just listen to Mark Tremonti to hear what you can do with the job ...
But again a beginner would better on a crybaby for the same result.
(I also play mostly on ESP with microphones (PRS Tremonti) or EMG).

I ais for a little over 6 months (I board bought the dimebag and that's all).
The only unless I could give it a more medium that Crybaby everything else against it by the top.Rien not equal comfort level / usage.
I already had a number of wha wah before and I am mainly the one now.
The value for money was good but I do not buy in France ais ...
With the experience I would have purchased earlier (although the model is not old)

Did you find this review helpful?yesno
»
Read the 5 user reviews on the Morley Tremonti Wah »