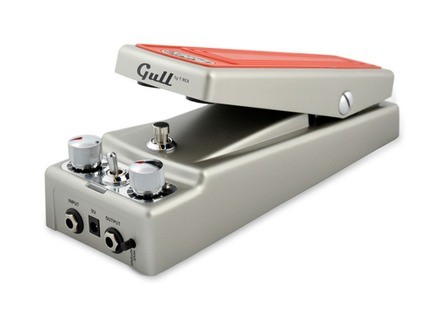 T-Rex Engineering Gull
4
T-Rex is a small pedal maker out of Denmark. It was started by two brothers who were out to make the best guitar equipment on the planet. They started off by making MIDI equipment for guitars then expanded into effects and stomp boxes. The Gull Wah pedal is one of their newer models and they say its the Wah the world has been waiting for. The pedal itself looks like an old classic car with its bronze exterior with red traction pad. The pedal itself has all your typical inputs and outputs with a couple of knobs for tone shaping. It has a slope knob and a boost knob with a 3 way toggle in the middle. The toggle controls the voicing. It has 2 Wah voicings and a "Yoy Yoy" voicing. One cool feature is the wah effect is controlled by a magnet so you do not have a pot that will wear out.

The pedal feels very solid and heavy. It has an easily accessable 9v battery slot so you dont have to take the entire back plate off like on old wahs. The knobs are clearly marked and heavy duty. I dont like the input and output being on the top of the pedal. I am use to them being on the side like on classic wah pedals. The DC connection being on top is no problem for me. The pedal is a bit noisy when you click it on but thats not really a problem. One problem is that the sweep isnt very big. It doesnt really kick in till like half way down.

This wah is very versatile with the knobs and the 3 different modes. You can get sounds throughout the history of wah usage. The first Wah voicing is your classic wah sound. The boost and slope knobs seem to increase the thickness of the effect overall. If you have them both at 0 you get a thin nasally wah sound that sticks out a lot. This with the Wah 1 voicing gives you a nice funky sound. Increasing the slope and boost increase the thickness of the vintage wah sound setting. Setting 2 has a more dirty sound. The extra dirt on the sound gives you a lot of bite. It can sometimes sound like you have a phaser on. The "Yoy Yoy" preset reminds me of 80s over the top wah sounds. Kinda like Kirk Hammett on his worst days. The sound on this preset is crazy. With some gain this preset sounds a lot like Zakk Wylde when he is rocking out with the Wah. It is a cool sound if you can make it work.

If you are looking for a unique wah that has lots of versatility this is it. One thing you must consider is if you are looking for so many different wah sounds you may just want to you a rack wah. With one of these units you cant save presets or anything. You may like your knobs a certain way for one voicing and a different way for another. You cant do that with a pedal like this. If you dont mind the shortcomings this is a great unique wah with crazy tone.

T-Rex Engineering Gull
5
- Look to Hell! Inspired by the Mercedes Gull
- Good construction
- Knobs seem very good
- No knob on the pedal itself but an optical system, so virtually indestructible
- Access battery convenient
- Many settings

Against by not true bypass, but off it is transparent

The bypass switch is located under the front of the pedal as usual on the wah, but it's a bit hard to press really!

The pedal travel is a bit short for my taste

The versatility yet! The settings have a real action, and we can do many things, but ... It lacks personality!

I have a Colorsound of 1974: magic, one is immediately in blaxploitation soundtracks of the 70's, while remaining very soft ... Even a "banal" Cry Baby has a real personality, shrill in the treble!

The Gull: blah! It does its job nickel, nothing to say, but I hear nothing interesting!

If you want a versatile wah, well made, that fits all situations, which do not cratchera over time, with a boost and look great: take it!

If you already have several wah and you are looking for the "mojo", go your way!

It's still a very good wah, objectively speaking! But in my case it's back home Thoto, it's not for me!

spad91's review (This content has been automatically translated from French)" Versatile"

The manual is clear, a quick glance can quickly understand what each knob or switch, in case it is not intuitive enough, or we like, like me, read the manual to know a little the product before use.

As for the setting itself, well, it's easy: one connects, and is used in its esgourdes tinkering with all the buttons to achieve his ends. ^ ^

Only (small) complaint, if I may, and I know that sometimes can be difficult AFiens, then yes, I dare: rather than a two-position switch to adjust the hotspot, I would have preferred a trim-pot (a small knob, what), to choose the position of this famous hotspot, rather than a choice of two fixed positions.

I read a notice saying that the switch activation was (very) hard, I have not found. Sometimes I certainly do not manage to snap or cut the pedal as I want, but I think it's more a question of hand (er. .. kick!) Than anything thing.
Moreover, it is probably because, in my case, I actually used to trigger automatic wahs ...

Oh, also, but it's something to know in advance: the switch mode generates a little 'plop' in the signal when you change the mode wah activated. But it is enough to switch wah off to avoid the problem. Even if we must switcher as the song progresses, the pedal will be a priori when we will cut the manip '(or so congratulations to him who the flexibility to change the mode while continuing to play, foot on the pedal!) .

Well, now ... bah I was looking for the ideal wah, I think if I have not found, I am certainly not far.

- The hotspot selects the tipping point of its relation to the pedal travel: it's definitely a slap in the competition. Modulation is obtained much more relevant and manageable.

- The boost increases the output level of the pedal, wah activated. For those who fear not out of the mix in his clear, too cool. For those who want to grow the distortion when the pedal is placed early in the chain, too cool, too.

- Wah modes 1 and 2 have very relevant differences depending on whether one has a clean sound or distortion: wah mode 1 is slightly more flashy, wah mode 2 is more 'soft' at the top of the race, history of not to burst the ears.
Yoy mode is fun, and it will be appreciated by all who have the utility.

- The slope to adjust the frequency response with respect to the pedal stroke. Already seen, certainly, but necessary, and this setting here provides exactly what is asked.

I have this pedal for a week and two ERfKE, and I already know she will stay in my set of choice.
There's more to learn to manage the effect (neither too much nor too little), and his game when it is used (maybe it'll make you laugh aficionados, but those who have not used to use a wah, and in my case, will need some time to manage the position of his guitar to not be bothered by the movement and the elevation of the leg, to manage the relevance shots wah compared to what we play, etc ...).

Anyway, this is clearly not the most data, it is certainly less than a typical vintage wah more, but it's much more manageable, relevant settings, etc. ...

We will they do their own sake, T.Rex, a version with automatic ...?