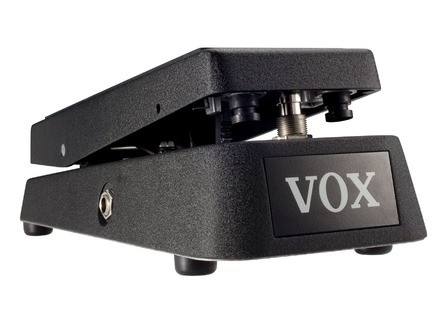 Vox V845 Wah-Wah Pedal
3
For specifications, well it is a Wah so it supports and it's wah, nothing complicated.

Ditto for the use, I do not go into the details, it is used very easily.

Well, there part for me the most important, I expected a clean sound british Vox, unfortunately I did not find this sound, I was very disappointed with the sound modulated short and not enough for my taste. My first instinct was to seek further support for a whawhater and nothing more lol we arrived at the end of the rotation.

So I read the potentiometer was of average quality, I confirm that frustration looking to have a bit more space in the variation.

So the change is knob a solution.

As a comparison I prefer the Crybaby for the history of space rotation but I wanted a more British so will have to look elsewhere.

So my review is a wah to do this by hand, but not for a pedalboard and we seek THE sound

* I notice that when the pedal is engaged, the volume augments the sound louder than before.

Very easy to use, because there is no potentiometer.
Then you plug it plays itself <img class="smiley" src="/images/audiofanzine/interface/smileys/icon_lol.gif" alt="" />

Bein, a wah-wah, nothing more. But still the problem of volume.
I use a Jim Harley Strato 'and an amplifier plus a stagg behringer pedal for overdrive.

I got it for Christmas and I was happy <img class="smiley" src="/images/audiofanzine/interface/smileys/icon_lol.gif" alt="" /> Wah this is the first that I board and I like it and value for money and very good
Did you find this review helpful?yesno
»

Vox V845 Wah-Wah Pedal
3
This is an analog wahwah could not be more conventional,
one input, one audio output. Ability to feed by
an external transformer. The bypass is not bad despite
slight drop in level.

The manual is useless, you put the battery and it works.

The failure of this pedal is the quality of knob.
He has started to spit in the second week of use.
I immediately replaced by a model of industrial quality
purchased at an electronics store, suitable for the Dremel.

Result, the sound is perfect and it spits out more.

The effect is great for a keyboard, it is also more suitable
one model over at Vox. That's what surprised me
Moreover, when I had tried in the store.

I use it for at least 5 months. Since the repair,
it is the faithful companion of my CP30.

I also tried the Vox V847 and Crybabies of Dunlop.
The V845 sounded better to my ear.

The value price is right, if we find a good knob.
Otherwise it is better to bring her back.

I will not repeat that choice because I prefer a more sturdy.

benben4's review (This content has been automatically translated from French)" sound: yes, quality: no"

At the sound, I used an amp before AD120VT which included a vox wah
in its effects and I liked very much, that's why I bought the
V845.
After adjusting the rack I managed to find the sound I wanted,
according to my expectations. (end of the race was too acute for me)

For true bypass, I use a G LAB GSC, so no problem for me
but there is a difference in level between the effect and bypass.

I ever had "dunlop" (Hendrix and cry baby), I prefer the sound vox
for the wah wah. I plan to buy the Wowee wah g lab to replace the V845.
I do not do it again this election because of the poor quality of the electronics
I bought this pedal about 6 months ago and I would not sell it