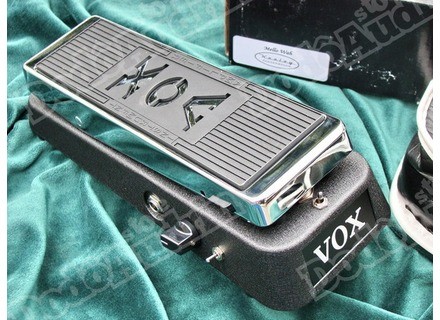 fabguitare's review (This content has been automatically translated from French)" Wah best in the world?"

One no longer presents Robert Keeley, who is most famous (and best) pedals manufacturer "boutique" in the world: he makes the pedals Steve Vai, Peter Frampton, John Petrucci, etc ...

Here is the translation of the description given on the website of Robert Keeley:

"Hi everyone! Let me remind you how your sound is damaged when using a wah pedal industry that does not possde true bypass.

When it is "off", the signal from your instrument is still rout through the circuits, even qund it disables !!! And this affablit your dfinitive exit. Not very good for your sound !!!

So there are many things we can do to ensure you get the same output sound that enters. Do not let one of the coolest pedals in the world to steal the magic of your guitar and your amp.

What do you dirire an LED to know when your Wah is running or not, or a volume control to adjust your wah gain, or new famous Fasel inductors, which will give you even more control for your sound, or a new power option "battery-ridding" or the possibility to switch inductors .... or all of these modifications at once ???

No Wah pedal never about all these options! Check out the pedals Keeley, and become a master in the art of Wah.

The configuration is actually very simple.

One branch, it sounds like a Vox, but 100 times better without breath, without loss of sound.

The fasels transducers provides a warm Wah, and the ability to extend the race is monstrous ..

A volume knob allows grate the effective dose, very convenient, because most of the time, lower the volume Wah especially in the treble.

Here it retains its full throughout the race.

There he ame small pads under the tilting of the Wah, which allow not hear quack when switches the Wah Studio, for example, noise which could rvler and Gnant be accidentally recorded ...

Finally, there is a three-position switch that toggles between three types of sounds (3 uses transducers).

The combinations are endless ...

I use it with a Fender Stratocaster and a Gibson 335, connects to a couple Triaxis - 2:90, everything has two speakers Mesa Boogie Electrovoice quips HP !!!

I am a professional guitarist, and Wah, I pass dozens (hundreds?) ...

The Dunlop Cry Baby, Vox A Standard, via Morley, and other exotic wah. My choice is always stopped on Vox.

But the knob always ended up spitting, and above all, these pedals are "sucking her" they never have true bypass.

Then I discovered Keeley buying a screamer all mods tube. The revelation.
As dry, I purchased the Vox. I did not t dcu.

I would do this choice without hsiter !!!

WAH WAH THE BEST OF THE WORLD !!!!
Did you find this review helpful?yesno
»