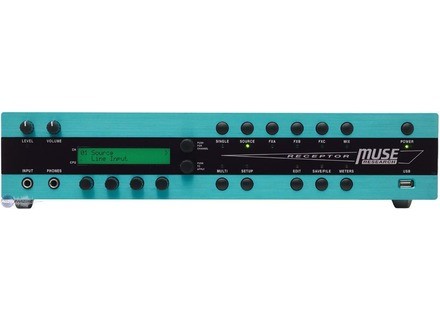 Muse Research Receptor
3
The Muse Research Receptor 2 is a computer designed to specifically host instrument and effects plug-ins. It uses a proprietary operating system, so you can't just install typical software for Windows or Mac OSX. The purpose of the product is to provide a reliable and efficient platform to run plug-ins. A popular use for the Receptor has been for 'live sound' applications to run the same software that is used in the studio without having to haul a computer to a gig. The Receptor is great for this because it comes in a 2U rack format, easy to transport and doesn't necessarily require having a monitor screen, mouse, keyboard, etc. To some extent it can be operated similar to a rack-mounted synth. The major advantage of the Receptor is that you can have gigantic sound libraries like Ivory or NI Komplete running on it, rather than having to rely on the much small sound libraries of hardware synths. Another good thing about it is that you can run software effects plug-ins, like Amp Sims, Reverbs, etc. in a live setting. This way you can take your studio sound to the stage.
A separate application for the Receptor is to be used in the studio to complement your DAW computer. This way your DAW computer to focus on the CPU tasks associated with running your recording session, while the Receptor can be used to off-load CPU tasks for plug-ins. In theory, this would be a wonderful feature, but the UniWire application isn't perfect.
There are some major things that make the Receptor a great product: running software plug-ins on a reliable hardware platform. Also a major plus, is that that most software can operate at really low buffer settings like 32 or 64 samples for virtually no latency.
There are also some major headaches about the Receptor. Because the Receptor runs its own operating system (Linux?), there is a lot of popular software that is not compatible at all (i.e. Waves). For companies that make their software available to be used on the Receptor, there is always a long delay from when a product is released to when it can run on a Receptor. The Receptor can be 'networked' with a Mac or Windows computer to install all the software. However, the Receptor is not compatible with new versions of Mac OSX. This makes it a big hassle to stick to old operating systems when other software requires up-to-date operating systems.
The Receptor has tons and tons of features that allow for tons and tons of different control. There is a steep learning curve for getting the Receptor to do a lot of the cool features that it can do.
In my opinion, there is a lot to like about the Receptor, but I can't help but wish there were a lot things that worked much smoother on the Receptor as well.
Did you find this review helpful?yesno
»

dOhm's review (This content has been automatically translated from French)

Muse Research Receptor
4
- How long have you use it?
Two years

- What is so special that you like most and least?
I use it mostly on stage as qu'expandeur (Piloting VSTis via MIDI), but also extend the PC for the most demanding projects, or take advantage of its converters for recording
In my opinion, one of its strengths:
-> Good momentum
-> Stable
-> One stereo line input, mono with a trim, one SPDIF and ADAT (8 digital out), and a virtual console (the sound of my keyboard from the top through the line, and my keypad - bottom - gives me access to a "premix" between the sounds of the Receptor - keyboard at the bottom - and the keyboard from the top. All jacks are stereo, so the signal goes through even if it is switched off or restart ...)
-> Special converters
-> Strength (the rack fell after a meter and it has apparently not budge!)
-> Manage MIDI. While there, if it's powerful, it's a bit complicated ...
- -> In order to address any Patch, you must send an MSB, an LSB and Program Change, 128 ^ 3 possibilities is just over 2 million patch anyway, divided between VSTis and Plugs. However, it is your control device (keyboard or otherwise) can manage the shipment ...
- -> You can assign any control change to edit a plug-in, for up to 16 VST effects and 4

- How would you rate the quality / price?
A basic PC is cheaper but the Receptor is reliable and predictable. To turn this kind of argument I am sensitive personal ...

- With experience, you do again this choice? ...
Must see the competition, but the concept of a computer rack, specialized (and therefore to the point), then yes it on stage!