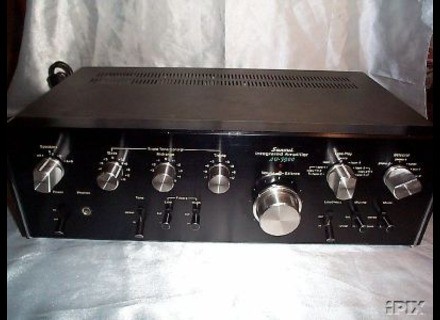 Sansui AU-5900
5
I bought my Sansui –AU 5900 in 1976 and am still using it in combination with Teac tapedecks an Tascam cd player, a Sansui equalizer and a Thorens turnable with a Shure V15 element
At a certain moment the sound of the amplifier became a little dull, mostly this is caused by the aging of the power transistors. As I have a degree in electronics no big deal, but the power transistors need to be paired as a result of the original design. The nasty thing was that supplementary power transistors were hard to find and the original Japanese ones were not available in Europe. Through Amazon I found I supplier who offered five pairs for a reasonable price in Hong Kong. At arrival a few weeks later they were exactly the correct Japanese type and also from the same brand.
As the AU-5900, AU6900 and AU7900 have the same power printed circuit board, with more or less components I decided to upgrade the output board to an AU7900 version, I needed some capacitors and resistors, some screws and isolators that’s all.
In fact the only difference between these models is the number of components on the board, the preamplifier is the same as also the power supply. There is a difference in filters, but they are hardy to never used.
After this upgrade, the output stage became a triple Darlington, the noise ratio became better, so worse that if you forget to switch the amplifier off only the red light indicates that the power amplifiers is on. Also the power and thus the dynamics of the amplifier became much better
The amplifier is now about 44 years is use and fit again for several tenths of years.
Finding a better one will be hard and costly, many brands in the 70’s used bad quality components and PC boards even so worse that there are firms who replace the complete boards with fiber glass boards.

marth65's review (This content has been automatically translated from French)

Sansui AU-5900
5
He has nearly 30 years and not a wrinkle, and certainly better than many amps today. Exellent both in sound quality that is puissance.Il 4 * 75 watts but the real watts.C 75 is a amp semi proffessionnel 70 years has the time or sansui was renowned for his musicality and with good speakers it is an exellent stereo amp with a sound quality with a very large reserves of dynamique.J did it several evenings since I and have no problems even at high volume it can see bronchus pas.On finish it was designed for long facade with its brushed aluminum knobs aluminum massive entries directly etched into the aluminum. With respect to the connection it is also very complete with an output 'Main in' and 'pre out' for the couple to other amplifiers or allow devolved through a preamp or power amp more powerful example . In a word EXELLENT!
I put my highest score and I think it's well deserved!