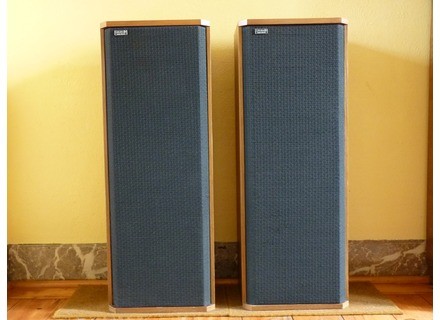 Celestion Ditton 66 Studio Monitor
4
I used these speakers as replacement for my Goodmans Magnum K2 from 1974 to 1989. I was seduced by the frequency response in the lows and the quality of the rest of the spectrum. At the dawn of the '80s I noticed that the quality of the mids and highs on competitor products clearly surpassed the Dittons. When I decided to replace them, in 1989, I was seduced by the JMlab 710 Onyx K2, which had extreme lows like I had never heard before up to that day: I could hear the bass drum of the symphonic orchestra at a level never reached with the Dittons, which, on the other hand, seemed to boost the high lows and render them fluffy.
Back then, Focal was called JMlab, and equipped their products with Focal speakers. It was a small unknown (at least to me) and extremely dynamic brand: They called me to tell me when they would finish manufacturing my speakers.
I still have these speakers, and I don't know if I will ever replace them, because my wife has become somewhat hostile to my music listening, so I invested in the Sennheiser HD800 headphones, which allow me to listen to music with lots of dynamics (to be more clear: Classical music) without disturbing my wife.
As for the Dittons, after having used them at my second home, I gave them to one of my sons, who still uses them today, since my second home has become my primary residence.
Did you find this review helpful?yesno
»

Celestion Ditton 66 Studio Monitor
4
I listened to these speakers for more than 20 years, from 1976 to 2000. Excellent when compared to other speakers at the same price point in 1976 (like the Elipson 1303, JBL L100, AR 3A,... no Unidentified Sounding Objects), they cost two months of average monthly salary back then. Throughout the years they have lost their superiority and have been matched and, finally, surpassed by other products in the small hi-fi world. My B&W DM605-S2 from 2000 that replaced them are clearly better in terms of musicality: They have the same deep low end, but even tighter, and the high mids sound "less harsh." And the B&W CM9 I bought in July 2011 really relegate them to the unexceptional hi-fi "vintage" category. I'm sorry for fans and nostalgics.
Did you find this review helpful?yesno
»

Celestion Ditton 66 Studio Monitor
4
I have used my celestion 66 for more than 25 years. I got them for a decent price and in perfect condition, thanks to a friend who wanted to get rid of them and sold them to me secondhand.
I still can't get used to the way-(too)-heavy sound of these speakers and I think the highs are too weak compared to the Goodman HE1 I had before, which I think have a clearer sound. But anyway, all in all they are okay, I balance everything with my Jamo.
Did you find this review helpful?yesno
»

Celestion Ditton 66 Studio Monitor
4
As a two-time owner of these celestion ditton 66 studio monitors,
I'll give you my opinion about them.

Back in the day, I used them with a marantz 4400 receiver, as well as a pair of mcintosh mc 30.
These speakers highlight the mids, they have pretty detailed highs only and a good foundation in the lows,
which are fuller with the Marantz. The tweeter gets pretty high with ease and without being irritating.

These speakers are comfortable with all types of music and deserve a big room to really give their best in the low end,
as well as a powerful and musical amp for the passive drivers.

The only thing I would criticize about them is that the low mids are weaker, compared to JBL monitors or even the smaller 44s, it's flagrant.
It's true that with a mid-range 5.5" driver the frequencies around 500Hz have a hard time coming through.
And it's a pity, because if they didn't have that disadvantage I would still have them with me.
Did you find this review helpful?yesno
»
Read the 18 user reviews on the Celestion Ditton 66 Studio Monitor »