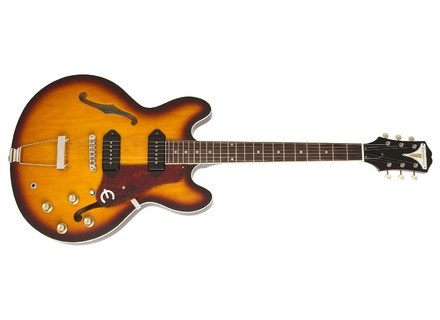 jiel's review (This content has been automatically translated from French)" A beautiful reissue! A great success!"

Epiphone 50th Anniversary 1961 Casino TD
5
Recent acquisition, but want a old eternal fan of the Beatles, made in favor of an ad worth noting: the instrument was almost new! I could even say he was nine remained in the hands of its original owner for 3 months.
Apparently it is assembled in China U.S. items (marked "handcrafted in China on a sticker on the back of the head). The bottom of the box receives the famous blue label" Epiphone Nashville Tennessee, "which suggests that Epiphone fully assume the instrument. Only 1961 copies were made in reference to the year of release of the original model (the guitar comes with a certificate attesting to its number in the series 1961 instruments).
U.S. fittings therefore (I do not have the means to check) and especially Gibson P90 pickups 2.
Personally quite impressed with the build quality. No visible defects whatsoever at the violin or varnish. It feels no edge sanding or imperfection when passing the finger into the gills. Very favorable impression at this stage. I think the only question is how the guitar going to evolve over time? The wood quality are they? Dry enough? etc ...
That we can distinguish the wiring through the gills also leaves a good impression welds clean, shielded cables or good style. What we see does not clutter or assembly in tears.

Handle almost flat, rather short, at the 16th fret heel making access to acute not beyond the 18th or 19th fret.
In use, rather negative first impression: the handle is thick, in any case much thicker than the ones I used to frequent (Gibson SG, Fender Strato or TV). After the first impression, after a few months of use, I am less negative. In fact, you get used to the thickness of the handle which ultimately is not so bad that it is once you get accustomed to the instrument. In practice, I would not say it is super comfortable, but it is not tiring or handicap in the game
It must also be said that the guitar came to me very badly regulated, with terribly high action. This is perhaps what has been put off its first owner. In any case, it was my business, because after changing strings, adjusting the truss-rod and the bridge, I came to a good compromise in terms of comfort game with fairly low action, I like .
Ergonomics of a semi-hollow guitar ... it changes from a solid-body! The guitar is not heavy. We like or do not like ... I love the vintage side (but that's my age, after all I was born 10 years that when this guitar was created!).

The issue here too true satisfaction. This is what I expected, with a desire to have an instrument that clearly stands out compared to my other guitars (SG, Stat, TV).
It is clearly in registers jazz, blues or vintage rock. We approach the big round sound of bossa novistes jazzmen or with the neck pickup. IN making cruncher amp was superb blues sounds. Rock-pop sound of the 50s and 60s is within range (Beatles, Kinks, Stones ... here we are!).
For my part, I have not noticed excessive sensitivity to feedback, the default is usually attached to the semi-box guitars. I mean excessive sensitivity, the meaning of "control," because if we play like harmonic feedback, the Casino responds great.
Having long ago sold my old VOX AC30 60s (I regret that every day!), And essentially playing "at home", I plug the guitar is a small VOX AC4 is a VOX VT30 or then direct interface Line6 UX2. I think I did not draw the quintessence, but it's super good.

-: The thickness of the handle, even if you eventually get used to

In total, a report quality / price seems quite exceptional at this stage (to see how the guitar will age, but I'm fairly confident ...), especially when we had the chance to touch me as an instrument almost new a low price.