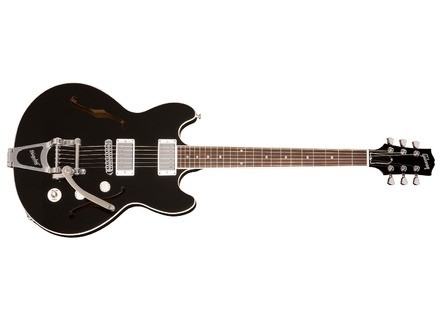 Gibson Midtown Standard with Bigsby
5
In the pure tradition of the great home of Gibson: Made in USA.
With a mahogany body (carved with gills), 22 frets, Bigsby bridge, nitrocellulose lacquer, and microphones: 57 Classic Alnico II neck and 57 More Classic Alnico II.
Mine is a red ... flamboyant!
Note the fly box provides custom Gibson with the beast.
For the rest, I refer you to the "news" section.

This guitar is it fun to play? Let's see ... And how! And then some! Tested in store just out of curiosity, I have rested about 30 minutes later on the base (ah lightning).
The sensations are (for me) between a round of Les Paul, SG and something else ... The width of the handle allows you to play comfortably fingers, like a pick, and fits my cell poile mimines.
Access to treble is good, for example, I would take the solo Lynyrd Skynyrd: Freebird, no worries. And it's ...

... The sound is really something. As usual the Stratocaster, I did not expect such versatility.
This guitar is perfect for beautiful rock n rollesques flights, typed with a vintage sound. That is powerful, with sustain, a retro side, the ability to get a round and slamming for bluesy songs (john lee hooker, BB King etc ...), or the brilliant and aggressive ACDC, ZZ Top, Led Zep ', Lynyrd etc ...
I play a Fender Blues Junior with a Celestion Vintage 30 speaker and then the magic happens. It's as if Chuck Berry had lent his guitar to Billy Gibbons. (Ok I'm racing, but it is the emotion).
Do not be fooled by its gills that may inspire him a jazzy, this guitar a strong character, but it is also surprisingly clean sound (a real pleasure to play with my U2 delay électronic TC).
Obviously, this is not a cut for metal guitar.

I use it for a week now, and intensively. I separated from my PRS singlecut for this one, and I tried a few Les Paul before cracking.

What I like most:
-LOOK
Retro-side
-Versatility
-57 classic pickups (yum)
-Comfort handle
-The bridge Bigsby
What I like least:
- ...
-The moment I have to do anything other than play

The value for money seems excellent for the mahogany and such attention to detail, (ok, except for the plastic nut on the head ..)
I would be on my mind after this next scene. I noticed that the bridge Bigsby tends to detune the G string, but nothing serious. At the same time, with such a flexible game, it seems normal.
With hindsight, I would do this choice without hesitation ... I leave you, I will return to play

bigfatony's review (This content has been automatically translated from French)" Powerful and beautiful ... it's called Midtown"

So, for the handle, I would say it is kind of "large", we feel we have something in hand without it being too ... I still advise a setting because the strings are a little too big and do not facilitate the bends, for my part a simple change in 9-42 resolved the problem. the action is normal, which I do not like playing too high nor too low,'m in heaven! access to the latest frets is very good, to do solos in the last few boxes ...
in terms of ergonomics, it has a reasonable weight and shape is not too "INVASIVE" as an ES335 or other ...
Indeed, compared to an ES, the body is smaller and thinner.
In short a very good ergonomics, which still requires just a small adjustment to the hardness of the strings

While a fan of Disto and sustain, you'll love!! I who plays the Power Blues, Rockabilly Power, Power Of Rock and many others, I'm really happy, I play a Fender Hot Rod Deluxe and I immediately realized that compared to my Fender ( Strat and Tele) I had to halve the DRIVE, this guitar is really made for heavy distortion and other, more sustain, there is! a small bend in the direction of his amp and presto ... it screams Some find unpleasant ca but I love.

In short, I play mostly power but I also have a group of Cover From Elvis and I play clean sound and it fits perfectly. So this guitar is made for anything but funk but it depends on you too!

So that's 15 days I have this guitar I did four concerts and that's just pure happiness basically I would say this guitar is powerful, it really offers the power of pure treble of serious mediums. .. all there!!

With american strat and telecaster, and having already tried the Gibson, I swore by FENDER but ... it puts everything into question ...


one flat on the nut and the plastic switch position (under the Bigsby) which does not facilitate the change of micro ...

Regarding the price is more or less 1150Euros what is really just for a guitar with this quality of sound and games!!
a choice I do not regret in any way!

See all 14 photos of Gibson Midtown Standard with Bigsby »