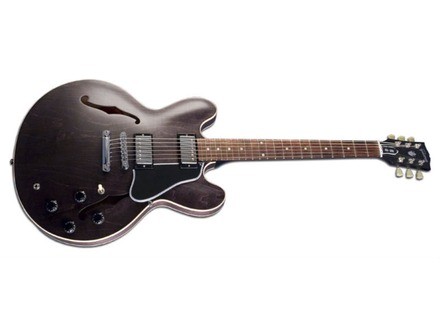 Gibson ES-335 Dot Black Satin
4
Here is a small limited edition in which Gibson has nothing to envy her big sisters pompously polished and shiny ...
The Black Satin is a real ES-335 DOT (reissue), made in the workshops of legendary Memphis, Tennessee (certificate in support of course).

Qques details:
bridge: the classic Tune-o-matic.
Channel: perfect, very fast, very comfortable, very fair.
Central beam embedded in the body, which adds sustain and reduces feedback ...
Pickups: contrary to what you may read on the net, it is indeed the same mics on other ES-335, namely double humbuckers 57 '. Pickups full of personality and power, which are easily adjustable and nuançables through the usual four pots (volume / tone X 2) and the three-position lever.

The general ergonomics of satisfies me, I was looking for a guitar for spatieuse enough place to play, here is made with Satin ...
I am surprised to read that many do not like to play standing with a 335, I think it is much more pleasant than a Les Paul for example, balance and weight level.
Here we are certainly on a large half-box (with central beam), but it should not discourage you think Chuck Berry has spent his entire career doing the craziest stunts on scenes around the neck of these shovels one!

Question her, I'll almost want to say that just plug the 335, all pushed to bottom buttons to already have a sound worthwhile.
Of course, there is the amp qqchose, personally I have a Fender Blues Jr Tweed Edition is a good marriage, just mount a hair gain amp and go!
Of course, this is not restrictive and it is very interesting and essential to really take the time to find his own sound in both acting on the guitar (pots-lever), and also on the effects chain and on to the amp!

I do not have shares in the company Gibson but I have to take them off their hats for this guitar.

Memphis Tennessee! Welcome to the land of blues and rock'n'roll! !

With this beautiful Gibson, and an affordable price, you have your one-way ticket for great colorful, warm and captivating travel.

Not having the means to buy me a "real" period DOT335, I opted for this formula that (at least) three advantages:

- The look with this Black Satin Matte satin finish (which does not exist in the original model, it is a "reissue of a model that does not exist"), which is very elegant, and rivals for me no problem with the same varnish well.

- Sound, because it is before TOUTA way it is, a guitar, and there is no hesitation on in his legendary Gibson, it sounds, this is accurate, it's hot, great sustain, many harmonics just waiting to sing a cut to the speed of light handle that allows to go into speed mode, in short, a great playing comfort

Be careful though to the survival of the patina, which is obviously much more fragile than varnish. Do not deceive yourselves, even with great care and caution, the guitar will quickly small marks and small scratches surface (especially on the back, for clumsy that would rub their bellies filled with zippers on their hip) This is ... the game!
At the same time, the idea of ​​"doing" his guitar over the years, it takes your footprint especially in this particular registry dedicated to the Blues, I like enough.

I use the 335 DOT Satin black for more than two months. I tried about 20 other models 335, true vintage original, and all models of reissue that I have come across before opting for one. I also tried on the day of purchase, several other models in half-box (vintage Epiphone Casino, Epiphone Granada vintage Gretsch 6120 Gretsch Falcon Gretsch Electromatic, several Ibanez, Yamaha ...) and I finished in beauty by the 335 which has firmly convinced me (tested on a Fender Blues Jr which suits him very well).

Finally, good quality / price ratio, this model (limited edition) can afford a real 335 reissue at an affordable price, I therefore advise all guitarists who want to invest in both an instrument of very good quality and walk in the footsteps of legendary Blues and Blues-Rock ...