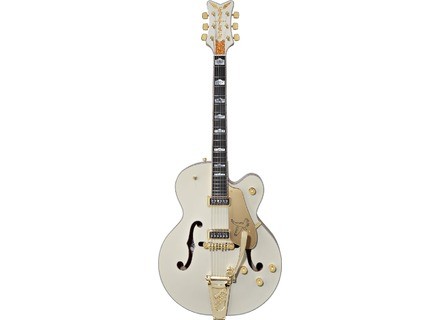 Gretsch G6136TLDS White Falcon
4
The Gretsch White Falcon is essentially the Gretsch equivalent of a Les paul Custom in the Gibson catalogue. Known for it's beautiful glowing white finish, lavish appointments, and big sound, the White falcon is an instrument of infamy. This particular guitar, the 6136TLDS, is a throwback to the 1955 era of White Falcon. The body is a laminated maple with a set maple neck. The fingerboard is ebony and is adorned with stunning winged inlays. The electronics are made up of two Dynasonic single coil pickups wired into a three way toggle, a shared tone pot, independent volumes for each pickup as well as a master volume control. There is a Bigsby tremolo fitted to the guitar along with Gretsch's synchro-sonic bridge. The guitar is visually breathtaking and really has a sense of flash about it.

The white falcon's tuning stability is top notch thanks to both the fitted bridge and grover imperial tuners. The tremolo rarely went of out tune unless I really abused it. The neck on this guitar surprised me with its smooth, quick feel. I felt just as comfortable soloing on this guitar as on my smaller Les Paul bodied guitars.

There really isn't anything this guitar cannot do. The clean sounds are some of the best I've heard and the Gretsch makes just about any genre fun to play. There is something about holding this guitar that just inspires you. I found myself playing parts of songs in new ways simple to see what little things the white falcon could add. Running the gain higher, I found that the White Falcon handles gain better than almost any hollow body guitar I've played, save for the Hagstrom viking. The neck pickup can be as blues as it gets, while the bridge can scream and rock with the best. Extremely enjoyable guitar to play and hear in the room.

The Gretsch White Falcon is a guitar that needs little introduction. I feel that some people may have placed limits on the idea of the guitar's versatility. I could easily use this guitar as my primary axe and get through a harder rock set with no problems. The price can seem daunting but you get what you pay for. I have noticed a trend of guitarists motioning between this guitar and the Duesenberg Starplayer series. Both guitars will get you similar results. The Duesenberg will be the more nimble of the two as far as handling, but the sheer size of the White falcon allows for unmatched resonance.
Did you find this review helpful?yesno
»

Gretsch G6136TLDS White Falcon
5
At the technical description, the notice above is excellent. Enough said. What about on the most beautiful guitar in the world? nice one point referred to the case of very nice class. Nice black case with a brass plate estanpillé gretsch. the beautiful comes with its key truss road, which is not always the case, including at Gibson (for my J 200, Tintin bah, that fortunately I had e than my SG. This version is low bright white, it is to simulate aging cream color past 60 years. Attention to detail.

The neck is super nice. Me following hard on this point, it suits me. After a small adjustment of the string action and hop in my hand, immediately on hand. I thought that as I have for a month before well have it in hand, not ben. The guitar is a bit heavy compared to others, but with a belt effort to protect the backs of people who are damaged like me, it works well. ben say that the sound, the Gretsch is so close to the 1955-1957 edition, in one or two details, it sounds like on the old records of that time.

I returned to my first love, with this rock from 54 to 57, so of course it suits me well. the Dynasonic, work wonders. Even if the Bigsby vibrato is not the original, it's perfect for her. In addition it gives a terrible mouth on guitar. I set up ropes to mesh dish and it suits her. On the Fender or Marshall, in clear or crinch it is a treat. I, who wanted a sound close to Imelda May, suits me. I tried it with distortion such big sound, but this is not done. the sound is not rotted away from it, but the beautiful, is above all the rockabilly sound tritauc.

I love Gibson, but it's still a step up. The sound is so fine and of a seed to fall. This is not a great guitar that is facing us, but one of the few industrial objects that rises to the level of work devantd'art there, like a Ferrari 250 GTO of 1962. We are faced with the must.

xmenrock's review (This content has been automatically translated from French)

Gretsch G6136TLDS White Falcon
5
This model is part of the latest additions to the range of the White Falcon.

I will first explain the origin of model number:
"6136" model number
"T" for Bigsby (Tailpiece)
"L" for the varnish of cellulose type (Lacquered)
"DS" indicating that sagit Dynasonic type microphones.

- First impression:
Aesthetically it all the characteristics of the models in production from 1955 to 1957 and everything appears to be consistent except ... the presence of a Bigsby B-6 that replaces the famous tailpiece type "Cadillac Tailpiece" that typically found on the Falcon but will complain.

- The Head:
Beautiful head typical of White Falcon (also found on White Penguin for that matter).
The logo and the vertical truss rod cover spakle gold finish that appear to be, as always, made from the coating drums (Gretsch of course).
The beautiful and popular in many Grover Imperial Oil are always on duty.

- The body:
Maple veneer, éclises thickness: 70mm.
The description of the official website does not mention any, so I struggled to believe but if I do not suffer from visual impairment, the reinforcement inside the box would be to type "Trestle bracing."

This type of reinforcement is a Gretsch for selling in many model (6120 Setzer signature, 6120-1959, 6118T-LTV-6136 LTV etc ...) but the details make sense influence the behavior of the guitar is appeared in 1959: scratch:. I would be tempted to add a Gretsch point for the technical side, but I take it off to the side so authentic 0 everywhere.
The bridge is a floating bridge when the Synchrosonic Bigsby B-6, they mounted a big lever as the famous "Fixed arm" that was found on 6120 to 1955 except that it is built ... it fits rather well to the template.

- Binding:
is not this model have a word specifically dedicated to the topic: The binding (nets) are of course consistent with the high-end model have always been the Falcon.
Whether on the neck, head, body, etc ... everything is the mutilpli. The slice is gold sparkle and the net itself is white / black / white / black which gives a very successful finish.
When the gills, they also benefited from the edge but with gold sparkle fillets simple white / black.

- The electrical part:
The master volume knob is located on the notch and then back down we find the tone knob and volume knob two (one for mic).
A selector switch microphones.
The pickups are single coil Dynasonic.

It is not easy to take pictures of the bird, we had to hide all malgas lonques hours but I have not quite managed to capture the true nuances of color is ivory feathers.

- Sound test:
When empty, the guitar has a precise and balanced. Contrary to what one might imagine in view of the jig the bug there but the bass is not ubiquitous.

The Gretsch and many other models feel at ease in many situations and it's not Brian Setzer, Martin Gore and Bono to the contrary.

Once connected, the guitar its just as accurate and very good sustain.
- Neck position, the micro rings with clarity, his velvety bass.
- Neck position, the sound response and slamming fairly typical single coil pickups but do not tear eardrums.
- Middle position: the "twang" as we like with this type of Micos, the sound is pretty éqilibré and does not bleed.

To conclude: A beautiful White Falcon as in the wildest dreams, Clein a look to the models of yesteryear spirit middle 50's in the clip as "Stray Cat Strut."
The Falcon is part of the "big rig" on which we feel quite comfortable with a weight rather honest: 4.6 Kg

The choice of putting a Bigsby on a more satisfied.
Nitrocellulosic varnish adds a vintage and authentic side to the object that, unlike most pictures where the bird appears to have a slightly bluish white plumage pristine hue to the contrary, a beautiful ivory color slightly.

I have not found any downside to this guitar.
Even if it takes $ 4,650 U.S. to the catalog can not be said to be overstated for such an object.