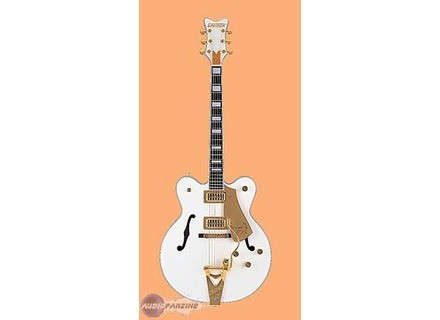 petit professeur's review (This content has been automatically translated from French)

Gretsch G7594 White Falcon II
5
Well then it's a hollow-body guitar (set neck, fully hollow body, shaped central beam 335 without).
It was manufactured in 2004 in Japan.
22 frets, Bigsby, 2 humbuckers Filtertrons.
My copy is a left-handed model, it's good, I am left handed ..
The finish is a bit special, I am not a fan of golden deck fittings, but it's such a different planet ...

The handle: very thin, fairly flat radius, very easy to play for small hands is a real treat!
The form 335 provides ideal access to acute (junction at the 18th fret), against it by a guitar that is quite heavy and itchy nose because of its long handle ... therefore provide a good strap, the debate is open ..

The sound is very good, jazzy with nets dishes (I mounted D'ADDARIO .010/.048), the bass is clear (equal to taking more than one type GRETSCH 6120 pace with 24, 6) is due to pitch 25.5 I guess).
It has good sustain in the treble (the also, pulling the same, and even by increasing the pulling on my other Gretsch (G6118TLH Anniversary), I can not get a good ausi sustain in the treble, it's j imagination of the pitch and the design of the guitar (the White Falcon II has a thinner body, but the wood is thicker, with many reinforcements .. which explains the difference in weight with the Anniversary, which is Super slightly off.

It suits a lot of styles in my opinion, from Jazz to indie rock, not of course to make Satriani ...
I play either direct the computer with Logic Pro, or through a small combo transistor modeling, TECH 21 TRADEMARK 10.
It supports many distortions strong enough, it then produces a superb feedback easily controllable, since due to the body and the strings, not the microphones are of good quality.
The sound is typical of filtertrons GRETSCH, ie without the fat humbucker pickups Gibson.
I generally used in clear or light crunch, I added a pedal tremolo and spring reverb built into my little amp ..
I love to use his Bigsby, very effective!

I've had a little over 6 months, and it became my favorite guitar.
I like the sound better than my anniversary, which next to a more "wise", more "off." I also think of replacing the pickups with MAGNATRONS ANNIVERSARY TV JONES, to win a bite to Dynasonic and stay out of the FALCON.
I bought on Internet in the States, left in good self-respecting ...
I had tried (and bought) just before a PINGUIN WHITE, equipped Dynasonic, who had a great sound but was sorely lacking to sustain my interest in a solid-body (knowing that I already have to sustain limited ANNIVERSARY ..). So I sold it (thank you patpick!) Ust and fell after a great deal, an American store that sold this new copy of 2004! It would have cost me twice in FRANCE! So I dived and I do not regret my choice.
It's an expensive guitar, but worth its price.
I tried the Duesenberg, which had not convinced me in the neck, too thick for my small hands ..
I would do this choice, more ways than one!