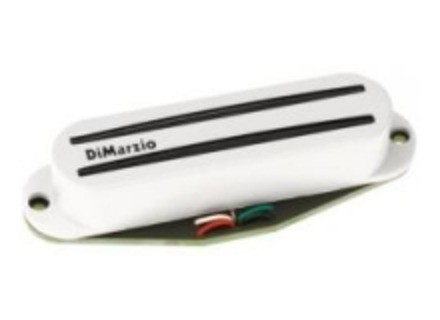 DiMarzio DP225 BC1 Billy Corgan Neck Model
4
Dimarzio is known for its modern aftermarket pickups. While Seymour Duncan is known for its vintage style humbuckers and vintage style single coils Dimarzio is more for the player of modern music. This goes for its single coils as well. Most of Dimarzios single coils are really just small humbuckers. This is one of those pickups. Many Dimarzios are just slightly tweaked versions of other models as well. If there is a Dimarzio that you like but dislike a little part of it chances are there is a tweaked version of that pickup somewhere that you can get. The BC-1 is Billy Corgans signature pickup. Billy Corgan is the frontman of the hit band the Smashing Pumpkins. They are known for their modern but modest sound. This pickup encompasses what Billy needed in a single coil .It is a single coil sized humbucker for him to use in his signature Stratocaster. It is pretty hot even for a humbucker so in the place of a single coil it has tons of output. It has rail magnets and four conductor wiring like most single coil sized humbuckers. Dimarzio says this is a tweaked version of the Air Norton and it sounds the part. The Air Norton is known for its smoothness and this pickup still retains this feel to it. The tweak done on this pickup adds more bass and gives the pickup a more open sound. Which is kind of what you want in a strat. It retains the very PAF''y tone of the Air Norton so the pickup is still great for leads and nice classic rock riffs. It is not that tight so I would not play metal on it. It works well in the neck or bridge position. In humbucker form I would mostly recommend it for the neck but in a strat you can do both very well with it. With the more open sound it sounds less compressed than the Air Norton but it is still pretty smooth. If you are looking for a nice single coil sized humbucker and the Air Norton S doesnt quite do it for you than you can try the Billy Corgan BC-1 Dimarzio.
Did you find this review helpful?yesno
»

DiMarzio DP225 BC1 Billy Corgan Neck Model
5
The BC-1 is a pickup that DiMarzio recently made for Billy Corgan of The Smashing Pumpkins. It’s a single coil sized medium to high output humbucker. It features the signature blade rails like so many other single coil humbuckers feature and four conductor wiring standard.

Billy Corgan used to be a big user of the Air Norton S for awhile in his strats. The Air Norton is renounced for its fat, smooth sound, and this humbucker is modeled after that very sound. The main difference between this and the Air Norton S is that one of the coils is wound differently to enhance the bass, as well as opening up the midrange a bit more so it’s not quite as compressed.

As a whole, this pickup sounds pretty close to the Air Norton S it was modeled after. The changes between the two are fairly small, mainly just a touch less mids and a little more bass. The output is nearly identical with the Air Norton S as well. That means that it works best in neutral to brighter woods. It features a smooth, warm sound that has liquid sustain for days. It’s sort of like a more modern PAF. If you’ve ever heard John Petrucci’s tone, you’ll get an idea as to how this sounds in the neck. The reason I mention Petrucci is because he used to be a big user of the Air Norton.

If you’re looking for a smooth, fat humbucker for your strat, but you’re limited to a single coil sized pickup, this is worth checking out. The only thing I’m not a total fan of is that it’s a Billy Corgan signature pickup. I tend to stay away from signature gear simply due to not wanting any artist affiliation. If the Air Norton S isn’t working out for you, see if this fits the bill.
Did you find this review helpful?yesno
»

Published on 05/06/09
For 2009, DiMarzio is releaseing the Andy Timmons AT-1, the Billy Corgan BC-1 & BC-2 and reintroducing the Steve Morse Neck and Steve Morse Bridge model pickups.