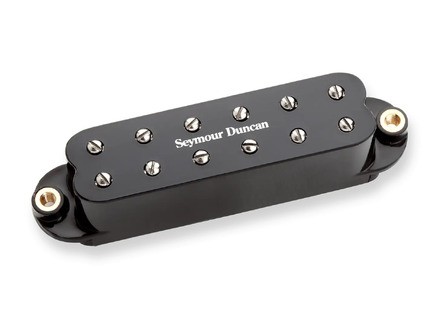 Seymour Duncan SL59-1N Little '59 for Strat Neck
4
This test is not about the whole set but the Seymour Duncan Little59 by itself.

This pickup is perfect for a real vintage 70s rock sound. A lot of mids in the sound – just like guitarists are used from a bridge humbucker on a Les Paul. The basses are nice and punchy and the sound contains a lot of sustain. Leads sing nicely and you can play with a lot of dynamics.

What’s special about this pickup is that it can be combined with normal singlecoil pickups. This can be done because it doesn’t deliver too much output – this makes it also suited for quite a few vintage guitars.
Did you find this review helpful?yesno
»

rent's review (This content has been automatically translated from French)

Seymour Duncan SL59-1N Little '59 for Strat Neck
5
So my sl59 was installed yesterday on my ibanez Sa
I had to bring them up by a luthier because I know nothing
in the sense that it is a mini humbucker, there are 4 instead of 2 son.
This was a micro-mounted handle, and is split
so basically I have the opportunity to play this on a micro humbucker
or the two simultaneously.
So at the sound, I released a very warm sound, a microphone that is not bad crunch
when the gain goes, I think it is nikel for the funk.
It sounds very vintage, it is also nice overdrive and distortion,
At the price it goes even though it's expensive for me as a student
purchased from thomann.
I recommend it if the guitar is splitable

greg lefonctionnaire's review (This content has been automatically translated from French)

Seymour Duncan SL59-1N Little '59 for Strat Neck
4
Well, I finally decided to put a new micro acute on my jaguar Japanese ... I found the original micro acute enough unusable, and my goal was to find a microphone to grow with the microphone serious, So the jaguar, which could bring me a little fishing ... And so it works well on the micro scratches ...
I installed myself, with the help of schemas and those provided from the site of Duncan.
It is therefore a double, single format, which to me is not splittable, as this was too complicated for my poor head.
It has a power good, without more, perfect for the rock, rhythm, and even solo, although I do not think the jaguar is perfect in this area ... The metalheads of Groos distos fans may find it be a bit leg 'what.
Otherwise, the clean sounds are convaicants, with its bold certain, and very balanced.
Crunches are easily obtained, and the riffs sound at will as soon as the gain increases. Even on clean sounds, I like the combination of two microphones, which sounds very sweet, and is not common. The micro severe jag, provides a foil to double interesting ...
The price is slightly lower than the double micros simple format of conccurents, and other mics of the same type of brand is a classic, to be more of a strat Excellent quality for example.
I would do besides maybe the choice if by chance I will buy another layer, to customize.
TO PREVENT that conclusion, this microphone has revived my Jaguar, by providing a versatility that was missing. It may be better suited to music styles that I like.
Here it is mounted on my Jag:

Seymour Duncan SL59-1N Little '59 for Strat Neck
5
The mine has been designed to be placed at the bridge. To the departure, i was gone for a hot track, but after all a coincidence, is the one I bought. It is installed for a little over a week on a Japanese Start, with Bare Knuckle Sinner in the neck and microphone original middle. Bof-bof ... It has a nice grain but it lacks the level of output I got. I'll have him placed in neck, to the pter hot rails bridge and I will post a notice about it once that is done!

I think "hot" was a little cold because I was a little feeble and shrill. In fact, silent hill on a Japanese strato rgler I had done by a luthier who has avre trsdsagrable play. To the fair value will appreciate, I placed on my strat U.S..

For several months it is mounted well and I had the opportunity presents better will appreciate its qualities. So here I am compelled to correct my view previous ones.

Regarding the level of output, it is certainly MODR, but correct: I mean besides a lgre increase in volume compared to my simple stratovolcano.
The grain is fairly thick and with a medium rather small granular ct which gives it great charm. I finally found him a lot of character and loves to increasingly play the blues because it complies with the guitar playing and all the nuances of the right hand (if right handed).
It sounds very vintage and lets get closer, I find the "brown sound" from Van Halen. On a Gibson would be perfect for the AC / DC.

I head presents on the neck pickup that would go well with this microphone ...