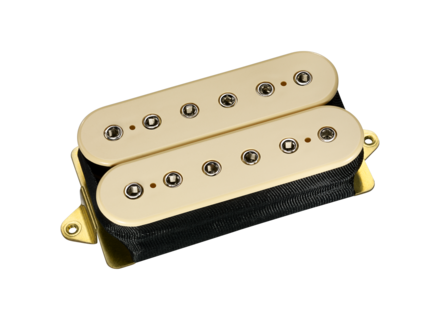 DiMarzio DP100 Super Distortion
4
DiMarzio released the Super Distortion a long time ago. I remember when it first came out and everyone started putting these in their guitars. It was usually a war between this pickup and the Seymour Duncan JB. Both were super high output pickups to help push the older, lesser gain amplifiers into overdrive more. This is pretty much a bridge only pickup. I can’t ever imagine using this in the neck because it would be way too high output. The pickup itself sounds very fat, so if you’re not into those somewhat dark sounding pickups, this might not be for you. The main goal was to help be compatible with old school Marshalls running everything at 10, so the pickup helped balance that naturally bright sound. With today’s amps and guitar tones, it’s not quite as pleasing at times. Iron Maiden was a good example of this pickup’s tone at times, as was Kiss. You have a lot of midrange in this pickup, so you shouldn’t really have any problems cutting. One trick you should do is play with pickup height because it’ll help give you some dynamics back and make the thing a bit more controllable. The pickup doesn’t work too well for modern music because it’s not quite as tight and refined as the newer ones today, but if you have a guitar that has a really bright tone, this could be the ticket to help getting a more pleasing tone without it becoming overly bass heavy in the lower end spectrum. Overall, if you’re looking for something on the vintage side, you can get this. You can also look into the Dual Sound because it’s the exact same pickup but with a push/pull pot for splitting. You can add a push/pull pot to this pickup if yours has four conductor wiring. If you’re more into today’s music, it might be worth looking at the newer stuff DiMarzio has to offer.

MountAnDewMe's review"Used by many I loved, but not by me."

DiMarzio DP100 Super Distortion
2
I purchased this pickup to replace the bridge pickup in a Washburn guitar that seemed to be a touch anemic for playing the heavier music I was in a band for at the time. I chose this pickup because I had an axe with EMGs in it for metal and was looking for something a bit more organic sounding. Many guitar players I was a fan of had used this model over the years and I figured I would like it for myself as well. Well it was OK.

I found that as the name implies it was geared for providing distortion. It did that fine. I played this through two separate tube amp rigs and in both situations it seemed to just have too much high end for my taste. It was a very cutting sound and I have heard many players pull out great tones from this pickup but as we know we all sound different and this was a poor match for me.

I tried cutting the tone on the guitar, pedals, and amp in many different combinations and found that as I tried to reel in the harshness I was killing the parts of the sound I did like. I also like to play certain lead passages on the bridge pickup at times and that was not an option for me with the DP100. The sound was way to thin to be useful for any single note playing in the mid to upper registers of the guitar.

I did give this pickup a long chance with more than a few output options to show me why it has been used for many years by a lot of my guitar heroes but in the end we were not meant to be together. Its hard to slight a piece that has such a good history as this pickup does but not only would I not buy it again but if I found a guitar I really wanted with it installed in it I would be prejudiced against it and preplan its replacement.

DiMarzio DP100 Super Distortion
5
Dimarzio DP100 Super Distortion, ceramic magnet, small hex pole pieces. Along side the Duncan JB it's one of the most famous and widely used pickups of all time! I bought this originally for a neck pickup in a Dimebag guitar but needed a pickup for my Jackson Rhoads so decided to throw it in the bridge. I was very surprised at how nice it sounded. A great crunch to it, it was smooth but still aggressive with a good grit to it. Kind of condescending but that's how it sounds, it had a velvety sort of smoothness to it that made leads really sing, but for rhythms it was aggressive and cut through very well. It was pretty thick and full sounding, definitely not a thin bright pickup. The low end was kind of loose so I'm sure with low tunings it'd fall apart a bit, but I didn't venture past drop D. It has a great vintage vibe to it. Good rolled of highs so it has that vintage sort of sound to it compared to modern music that’s tons of bass and tons of highs with little in between. It is still tight enough to pull off metal tones but really excelled and 70s and 80s style rock and lighter metal like Maiden and Scorpions (since both bands used this). Fun little fact, the very first Dean guitars actually had Dimarzio Super Distortions that were slightly overwound at the factory before going into the guitars. They used those throughout the 70s and 80s before Dean was sold off. Randy Rhoads’ Polka dot V had a super distortion in the bridge, Ace Frehley had one in the bridge of his les paul, as well as Iron Maiden all had Super Distortions in the bridge of their guitars.
A great pickup and I would recommend it to anyone.

DiMarzio DP100 Super Distortion
4
This pickup was one of the very first high output replacement pickups offered. It came out in the seventies and was used by everyone from Ace Frehley to Al DiMeola. It was noted for its very high output sound that worked very well with a high gain amplifier. Many rock players of that time dropped them into their Gibsons, and later superstrat guitars to get that bit of extra raunch. I've tried this pickup with many guitar types and can concur with the general opinion. There are more refined and heavier pickups out there for sure, but if you want something that has that classic "PAF on steroids" feel, this is a good place to look. It's not an uber high output pickup like say, a DiMarzio EVO, but it's also got more punch than a true PAF. It sounds best to my ears in a Les Paul Standard or Custom... something about this pickup and a slab of mahogany just WORKS. It has that nice barky low end, a strong and hefty midrange and a nice sizzly high end that's very hard rock. I also tried this pickup in various alder and ash bodied superstrats, and it worked there too for a nice punchy tone that kicked the amp into another gear, though I find that it could get a bit too bright and biting if put in an already bright guitar. if you want something similar to it but want the coil tapping feature, check out the Dual Sound, which is the same pickup but wired for a coil splitter. The Super Distortion humbucker is the original high gain pickup and though there are so many options in today's market, there is a reason so many players used the Super Distortion and are still using it today... it ROCKS.
Did you find this review helpful?yesno
»
Read the 20 user reviews on the DiMarzio DP100 Super Distortion »