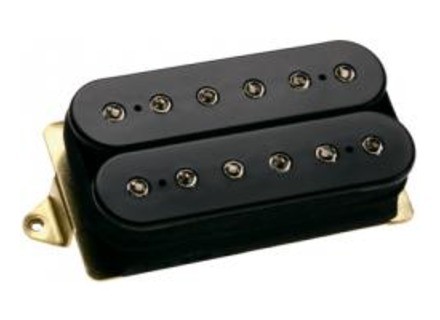 DiMarzio DP104 Super 2
5
When I was younger, I spent a lot of time around the Sunset Strip during the days of the "hair metal" bands. One of the compulsory tools of the trade at the time was a B.C. Rich guitar. At the time they were producing all sorts of neon colors and wicked body styles. More to the point of this review, one of the standard pickup complements of a B.C. Rich guitar "back in the day" was a DiMarzio Super Distortion in the bridge and a Super 2 in the neck. On the Sunset Strip, this was THE sound of Rock 'n Roll. I always wondered how those B.C. Rich guitars always sounded far better than anything going when set to the neck position. Fast forward a decade or two, Al Gore invents the internet, and we now know the secret. The Super 2 was really just a Super Distortion with the EQ curve compensated for being in the neck position. At first glance, you might look at the EQ curve (Bass=4, Middle=6, Treble=8) and say, "No way! That thing's gonna sound terrible." However, it does just the opposite. Think of the glassy, treble-heavy EQ curves of some of the greatest Strat pickups out there in the world, then combine them with the output of a Super Distortion (425 mV) and you've got yourself a recipe for an incredibly clean, bright, and powerful neck position tone. Of late, I've noticed that DiMarzio has reduced the output of the Super 2 to 400 mV--maybe they found something a little more magical in the roll-off. What I DO know is that every guitar that I have that has a Super 2 in the neck position takes on a whole new persona. You get that wonderful, round, glassy strat-type tone without having to use a pedal, but with gobs of output to allow that great tone to sustain for days. It works well clean as well, producing extremely clear clean tones and nice gritty blues tones.

The other B.C. Rich "go-to" neck pickup is the PAF PRO but at only 300 mV output, the PAF PRO doesn't hold a candle to the Super 2. As a side note, I know people who have used the Super 2 in the bridge position with good results. I can't imagine that with such a pronounced treble curve, akin to the Humbucker from Hell, but it may be worth a try. According to the Dimarzio site the Super 2 works well in either the bridge or the neck, but I've received the best results with the Super 2 in the neck and a Super Distortion in the bridge. Give it a shot... and don't forget the sweeps!!
Did you find this review helpful?yesno
»

DiMarzio DP104 Super 2
3
In the mid 70s Dimarzio was looking to cash in on the popularity of their Super Distortion pickup. They concluded that they should make a Super Distortion voiced for the neck position. Guitars felt they needed a hotter neck pickup than the PAF to go with their new Super Distortion bridge pickups On paper this may sound like a good idea but in execution it was not that great. First thing they had to do was lower the output a bit. While the classic bridge position super distortion puts out 13.7k in output, the new Super 2 as they would call it only puts out 8.7k. Then they went and changed the voicing of the pickup. This drastic change in voicing makes the Super 2 a completely different pickup pretty much. While the classic Super distortions voicing is slanted towards the low bass end, the super 2's voicing is slanted in the completely opposite direction. The Super 2 offers almost no bass at all and ridiculous high end. DiMarzio said they were looking to balance out the extra bass you get naturally in the neck position but I think they went too far in trying to do this. This pickup will only work in the darkest sounding 22 fret guitars. In any other type of guitar the pickup will produce an unpleasant sound. With the sound completely different than the Super Distortion it still comes with all the same problems. It does not clean up well as if it is only going to be played with high gain. If you have an extremely dark guitar this may be the neck pickup for you, but there are better new Dimarzios on the market. A Paf Pro does a lot better job at being a hotter neck pickup than this one. Dimarzio was still a new company in the 70s and I guess they did not have everything figured out back then.

DiMarzio DP104 Super 2
3
The Super 2 was a pickup made to go along with the Super Distortion. It’s a very high output, bitey and compressed pickup. It features adjustable pole pieces on both coils, four conductor wiring and a ceramic magnet.

While this pickup was meant to go with the Super Distortion in the bridge, it’s quite a different sounding picking. Where as the Super Distortion is extremely fat sounding, this is very bright sounding. It’s definitely made for a dark sounding guitar. The bass is pretty laid back, and the treble, as well as mids, are pushed to the forefront. The ceramic magnet is what helps keep this powerful, tight and compressed.

I really do not recommend this for the bridge. DiMarzio says it can work nicely, but this thing will just get too bitey. If you have an alder, maple or walnut bodied guitar, I recommend probably avoiding this pickup. It’s not quite as bright and clean sounding as the Humbucker From Hell, but it’s in a similar vein. This pickup sounds a bit more vintage-esque and a little bigger. Split coil sounds on this are pretty bright, and I’ve never tried it in parallel to comment.

If you have a dark sounding Les Paul, and you want a hot neck pickup with some bite, this is probably the pickup that’ll work for you. It’s not as clean and open as the Humbucker From Hell, but it makes up for it in terms of a big overall sound. Those with brighter guitars will most likely want to avoid this pickup as it’ll just be way too much, especially for the neck position where most people want fatter tones. Just be sure to power this up with a very hot bridge pickup to even everything out. The Super Distortion would be the most obvious choice, but any of the hotter choices that DiMarzio offers would be perfectly fine.