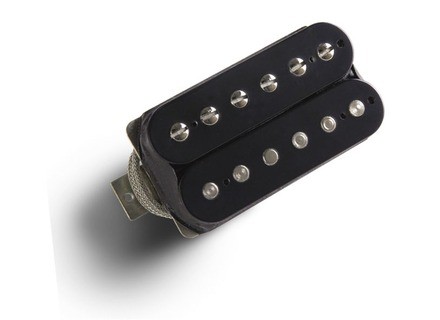 Gibson 490T
5
I bought it on advice of my luthier at first because I wanted to micro caps golden masterpiece on my Cort MMP-3 which was equipped at the base of Seymour Duncan SH-1 and SH-4 (Jeff Beck). So I went on the same microphone with a golden cover ... But I followed the advice of my luthier and I bought the pair 490R and 490T - Gold cover. And well how I felt. I really prefer the sound of these mics to those seymour duncan. The sound rendering, it is clear or saturated, is beautiful and I like much more than that made by Seymour Duncan. The difference is anything but sensible!
In addition to these microphones and split-are, so if you have a grat 'planned for, like mine

, you can use these pickups in single or double. In simple, clear sounds on, the sound is magnificent.
FYI, I played on Peavey Classic 30 and now on a combo Hughes and Kettner Tubemeister TM-18.

Gibson 490T
5
This microphone was originally installed for a year on my SG faded.

now replaced by an Angus Young signature.
The 490 seems very modern as microphone, it sounds compressed and somewhat accurate. Clean but not too much to it a little color on some dirty distortion that is not displeasing.

on the other hand I found a little too "pretty" dynamic level at clarity, it is rather round, slightly glossy, compressed, and this makes a good ally for its rather loaded gain.

It is perfect for the heavy, alternative stuff and not too vintage. It adapts well to his "garage" notemment I think.

In short it is a good mic in together after everything is decided on the direction that the sound I was looking it opposed the airy and crunchy ...

greg lefonctionnaire's review (This content has been automatically translated from French)" A microphone that lack of recognition!"

Gibson 490T
4
This micro equips Gibson SG special, but also some higher-end guitars like BB King Signature.
It is a very versatile humbucker. Fairly modern, it is precise, a moderate level of output, it has a nice clean sound, but he also knows and loves cruncher roar in the drive. He will take pleasure in the actual rock record, although I think the metalheads have better options than this microphone!
For my part, I could test it on an SG Special. I found it very coherent with the guitar, rock, dry clear. I've had it installed on my Les Paul Studio, after several unsuccessful attempts. I found my original 498T, too baveaux, no specific draft. I went through a Duncan SH-4, which does not convince me on my Les Paul. I had tested before on a Start, I was convinced. The 490T tempted me, and I passed. I found the accuracy, crunch it easily, and it stays on well balanced with the original 490R.
I think it really lacks recognition microphone, and it remains a very good alternative to other Burstbucker 57 and, for those seeking a modern sound, and a more reasonable price and more.
I know there are hand sets 490t/490r cheap, and I think that we should not hide his pleasure to offer them a pair to customize or improve an Epiphone guitar genre. I would add that it is splittable nine, but I have not tested. There are gilded hood (mine), or chrome, or black.

In conclusion, this microphone is worth it! This is not a microphone "low end". Versatile between 57 and 498T.