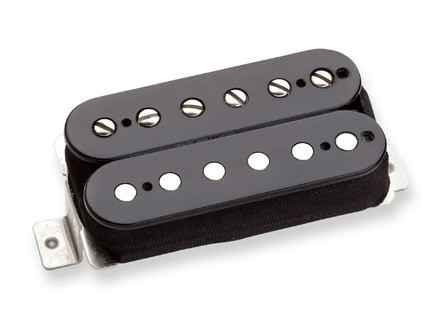 Seymour Duncan APH-1N Alnico II Pro Neck
5
Firstly, some specs I was able to dig up:

Great for studio and live use, the Seymour Duncan Alnico II Pro (APH-1) is a fantastic pickup. It has the silky smoothness of an old Gibson PAF pickup, with crisp clarity, and a warmth you could practically build a fire around. I've owned a few of these pickups, and I've used them in the neck position of a couple of Gibson Les Paul guitars, as well as the neck position of a Fender Telecaster. In both guitars, the pickup allowed the guitar's own characteristics to shine through, yet still imparted the tone with a wonderful singing "woman" tone, ala old Clapton, or Slash from Guns 'n' Roses. If you read my review on the Duncan Seth Lover pickups, this pickup offers similar tones, albeit a touch more modern and open sounding, and it is noticeably less expensive. I love both pickups for different applications, but this Alnico II Pro certainly gets the job done for classic rock, 50's rock 'n' roll type stuff, rockabilly, country (especially fingerpicked Chet Atkins style), blues, and jazz.

My favorite use is just jamming on a thick, overdriven Marshall, cranked up. This pickup excels at that type of use, and will provide all the creamy goodness you can handle. A bend, vibratoed note can sustain forever it seems, and the resulting tone will cause anyone, even lay-persons to take notice! I've had so many compliments on the guitar's tone if I play my Les Paul at a show. I highly recommend the Alnico II Pro for blues and classic rock tones especially, but as a generally versatile pickup, this one is a great choice as well.
Did you find this review helpful?yesno
»

Garcymoore's review (This content has been automatically translated from French)

I give my opinion for both bridge pickups AND handle (I copy and paste for micro bridge).

So I have a very brief overview of these pickups for a month is quite short but already what to say.

I played on a Vox AD60VT (Blue Valvetronix series) long with original Gibson pickups on my Gibson LP Standard brand (alnico V Burstbuckers). Vox eats a little sound of instruments because it is digital but it still feels the difference.

Overall, it is less fatty, microphones are air, clearer.

Vox on the neck pickup is out, it has a sharp wrapped in a velvet glove. This is a microphone that is very clear, defined with a "glam" envelope species solo distortion, brilliant highs but never aggressive. Micro bridge, bright but again, acute flattering, it's still warm and pleasant. It is very close arpeggios Gunsnrosiens. For crunch, it is less visible on an amp modlisation, the difference old Gibson does not jump to the ears but I will say more airy. We are almost in the same level of output, I did not need to change my sounds on the amp.

Now on a Marshall head lamps, one is more aware.
The thing is that I can compare less since I got the lead after the microphones, so I have no experience with Gibson pickups on this head.
However ...
I have another Gibson LP mounted with SH59 and a micro bridge whose name I know. I just know it's a Gibson, it is gold and it says "patented Applied for" on the back.
In rehearsal, I compared the two guitars on a JVM head 100W 4 HP 12 '.'s Alnico V had made a pretty yucky crunch, sorry to say, it was very clean as well.
The "bang" it was just excellent. A good sound crunchy rock'nroll of death that kills.

Now if I compare the alnico II pro with SH59 set + "bang", the alnico sound much better. Very well.
Therefore not been disappointed.

Now, I think out compared with my current gear: a 2005 Les Paul Marshall head DSL1-H HP 12 'without effects.

These pickups seem very "standard", they are not very typical. Could almost say they lack character if you do not know Slash. They are very versatile and if you type in a particular style, perhaps that something else is better suited.
It may well play jazz or metal, but it is not what is best for it.
They are not really vintage or modern, but really can do both, they are very neutral.
When I say that, it is not pejorative, but just to situate the radius of action of these microphones.
So obviously, they are very good for hard rock because we are in a style that is sought versatility in sounds.
If I had to classify this microphone, I would say in the hard rock category or Class 90, or in the category Guns'n roses.

Maintaining the quality of these microphones is excellent. They react to attacks and a rock crunch already, I can easily put in clear phrasing, even without lowering the sound of the guitar.
The sound is warm and airy, with very pleasant treble, never disturbing.
I've read some say it is close to Led Zep, I personally do not see where.
It approximates Guns'nroses hence the fact that it is connected to a Les Paul and a Marshall with a good compressor.

Among all the mics I have tried in the category humbuckers, only Seth Lover fighting these pickups, but Seth Lovers have an insufficient level of output for me. But if you are looking for vintage pickups, I recommend you listen the Seth Lover before making your choice.

KirKill's review (This content has been automatically translated from French)" Slash ... clean mode"

Seymour Duncan APH-1N Alnico II Pro Neck
4
I installed it on a Gibson Trad 60s who was fitted with classic 57 Uncovered (without the cover metal) the result is astonishing my Gibson has found more potato is fit in nicely as it should, it's fat was beautiful roundness of the bass can be good too ... some say Slash fans will be thrilled that sounds really good, intros clean (do not cry, paradise city ....) and solos (november rain, knockin heaven's door ... we) go really well at least better Uncovered with my classic 57, that those who seek his bluesy hard rock with the hot side and the small bump in the middle with good dynamics will be cons delighted by what he can be criticized for its too typed Slash might be missing originality with time

scanlan's review (This content has been automatically translated from French)

I have this microwave for a few weeks on a copy of 1978 LP Honhai, in a Channel ... Rcemment I opened the guitar to see what this micro silent, and I was pleasantly surprised to come across a seymour!

This microphone is dug in mdiums trs.
The sound is trs warm, soft and smooth the output level of any fine.

It sounds trs well in a crunch amp lamps, or clear a funky sound on the treble strings!
Did you find this review helpful?yesno
»
Read the 11 user reviews on the Seymour Duncan APH-1N Alnico II Pro Neck »