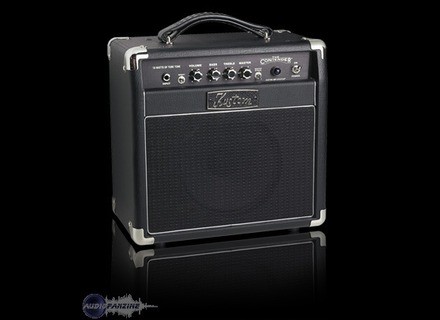 Maitre_Fono's review (This content has been automatically translated from French)

Kustom The Contender
5
A lamp in preamp, power amp 18W transistor
Settings: gain, bass, high, master volume
A bright switch and another to bypass the master

A guitar input, a headphone (not really top) and an output for external hp.

No effects loop but not in the spirit of this amp.

I have not read the manual. This is an amp that I like: you plug it sounds, you turn the knobs and it sounds better.

I play on a classic Stratocaster 60 '
It gets typed sounds 60, 70 with a lot of mediums, ideal for playing the blues / rock

But do not really expect to play metal with it without big distortion upstream, it's really not made for it but have not tested this config, I can not talk about it.

I use it at home, I use a VOX AC30 into repeated. Honestly, considering the price of the corny, the Kustom not be ashamed of VOX especially once plugged into external speaker is powerful enough to play in a group ^ ^

This is an amp with amazing sound really excellent for a small price.

I recommend it very warmly.

alainpaf's review (This content has been automatically translated from French)" A bomb, period!"

Kustom The Contender
5
a combo hybrid (prampli 1x12AX7-made in china, and a power amp transistor), 18W
a switch "bright" (a kind of treble boost very clean)
a gain knob for prampli
tonestack an atypical treble + bass (played by the two knobs on each other)
a master for the power amp
a switch to bypass the power amp (power amp is back and it RULES only gain. more vintage, there's not!)
headphone (not tested)
cab 8ohms output (very good)
no effects loop (the only problem on paper)
One HP 8 '8 ohm Eminence Epic 8 with a yield of about 97-98db (I compared with 95db and 100db)
an exemplary finish (classic kustom-on I got a 12 gauge that I had to bluff his price, it is even more polished-): leather grip, Fawn Tolex pass hair, silver piping cab pine and plywood corners mtalliques ...

The manual is to look pretty. Only two sentences are learned: "test all rglages to get your sound" and "bypass, turn down the volume on the guitar or else ..."

Obviously, this is not a transistor amplifier "neutral", we must work a little rglages to get what you want. But after two hours, you know you're in front of a small bomb! Note: HP is designed to break quickly (about ten hours, he enlve sound "boxy" of the beginning)

With a transistor amp (Kustom 12 gauge) and several small heads homemade (around 1W, with or without light), I wanted a versatile amp that I do not find sounds typ s blues, rock, but more volume. and I'm not!
I test with a tlcaster-like, a strat-like rises in Texas, a lag roxane 100 (humbuckers).
the humbuckers are very (too) and you emmnent the wild-del blues ... I retest better but for now, it's pretty tough
for single coils, then the only happiness! by rglages, we have what we want. this is terrible!
I test with a cab in 10 'just to see the difference (in waiting to board a cab 12' eminence) with the HP series. it did not blush. same is the strong point of this amp: lots of bass (for incredible diameter!), the sought not, the gniaque a very good performance. it simply phnomnal!
matter effects, with an added overdrive, it goes further into saturation, with disto idem, a fuzz. in fact, it accepts almost all the effects! DL8 my hardwire and reverb are top with, my cons muza FD90 not go very well (especially the reverb). a treble booster blackmails a lpb1 the cradifie (no top). in fact it is at his best with a looper tl (DL8 or FD90) and that's it! rgl bright, with the volume of the guitar to switch to lead, it's great, minimalistic! exactly what I was looking for!
and test it before the bypass ... you turn the volume of the guitar at least if attention ears! regulation of the focus gain, and good sound! the lamp and buzzes when you approach the amp with simple, was the feedback: the happiness of its gross dcoffrage!

Short, you'll understand: I love, love!
I was hesitating with bugera BC15 ... but a lamp change, a shabby hp (into 4 ohms), no exit cab ... upgrades ncessaires passed the 77 130 ... at least with the kustom, I have everything for the better and original!
kustom again put me on the ass! duced in the one is self-sufficient: a guitar, an amp and roll youth! even not need a cab outdoors to enjoy: the 8 'is incredible! lack of effect loop is not handicapping: most of the pedals going well in front, as long they are needed!
FYI, I test kustom (16w transistor), the VHT (6W any lamp), a few casseroles 10w 40w, and I qq low power amps under my belt. Premire function of this amp is diverged from a transition, which can be searched for its neutrality. it is for the graouh but be aware if you look at what's (blues-rock). if so, do not side of this little miracle.
in terms of quality-price ratio, 140 Thomann, may seem quite expensive: in this price range there are other possibilities (VHT, hb, epi), but in fact it's well worth!
ah yes: 18w is standard! (the joys of hybrid linear big power, not with the character CHRE lamp) A volume of apartment, I'm 10% master. .. with 8 '. I can not imagine building on an HP high performance!