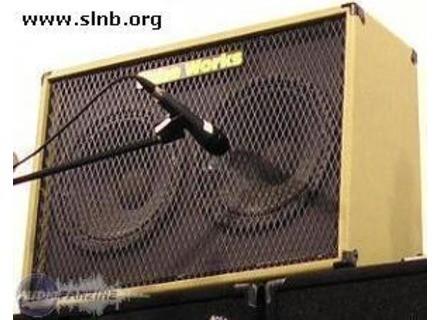 Tube Works RT-2100 MosValve Combo
4
The Tube Works RT2100 is a 1x12 combo dual channel guitar amplifier that contains the infamous MosValve technology of the eighties and nineties. The Genz Benz owned company used the MosValve technologies to simulate the tones of a tube power section at any volume. It's a two channel amp with clean and drive channels. Each channel has it's own EQ and the drive channel contains unique cascading gain controls labelled drive (amount of saturation) and stack (changing the tonestack to suit different styles of playing). There's also onboard reverb and an effects loop. The featureset is pretty standard, but it overshadows needless features for great tone. Each side is capable of about 100 watts of power and it serves well in jam and gig settings.

Setting up this amp is a fairly standard process. Other than the cascading drive controls it's a very typical amp and will respond as such. I find it has a bit more of a US voicing as opposed to British, though that classic UK roar can be heard peeking through the sound spectrum at times. The EQ controls work fairly well on each channel to shape a variety of tones, and the overall smooth and refined character is pleasing to the ear; it's not rough or grating sounding. It's definitely aired towards more of the classic vibe of tones. The overall tonal centre is rooted in traditional stylings which make it a cool amp for things like blues, classic rock or fusion-y lead.

This amp sounds great with a variety of different guitars. Using a Strat yields some really rich yet chimey clean toned that are great for funk or soul music. It can also do some great classic cleans a-la Hendrix or Mark Knopfler. Using a humbucker loaded guitar gives the cleans more bite and hair, rendering it an excellent choice for blues or early rock n roll sounds. Switching to the drive channel brings forth a smooth yet articulate voicing. Single coils seem most at home with more articulate lead work a-la Eric Johnson or Yngwie, and humbuckers work well for an even thicker yet still very smooth lead tone. It doesn't quite have the low end grunt or saturation for modern rock or metal tones, partly due to the strong midrange voice of the drive channel.

All in all I think the Tube Works RT2100 is a fantastic buy for someon looking for a portable, well priced, and great sounding amp that combines tubelike tones with solid state reliability. They can be had for about $250 used which is a real bargain for anyone who wants their amp's brand-name to be Good Tone.

Tube Works RT-2100 MosValve Combo
4
This is a 2-channel amplifier and a half, developed by BK Butler.
The combo takes first channel circuit pedal BK Butler Chandler Tube '70s.
The second channel simply reproduces the real tube overdrive pedal to tubeworks. On the second channel, are possible to add the "stack", which is a clipping diode providing grain heavier distortion and more acute.
These two channels arrive on a floor "solid state" is meant in MOSFET reproducing a power stage lamps, famuex mosvalve.
Power 100W is announced. But this amp can send more than some competitors 100W.
A spring reverb is intéfrée directly into the amp behind the membranes.
Connectivity point of view, there is a parallel effects loop with a trimming mix and levels out in a direct line level outputs and two speakers. It is possible to connect a pedal on a stereo plug to control more mono channels, the "stack" and reverb.

Setup is simple because that is the most common. The clean channel is easy to pay. Channel 2 requires more delicacy. The "stack" gives many voices at once! Attention to the ears and at for group play.
The manual is simple but adequate. It is possible to control the electronic diagram in genzbenz, which bought the brand 15 years ago.

This is an amp of blues, rock and hard rock. I never managed to get a good jazz above. For metal, pedal will be required. But in his chosen field, this is the class.
Channel 1 has a crunch that is strongly reminiscent of Fender Blackface. Channel 2 rather shady side amps English, with lots of mids and sound a bit dull. I compensate by adding a pedal to boost the treble to mount. The "stack", the sound is more open, but the grain is harder.
I love this amp for channel 1 and sticking to crunch wish.
Noise level is high, which makes for some nice neighbors, or when lowering the master, but you lose sound presence.

I have nearly 20 years. I tried other amps the same day. But he has earned by his tone and powerful sound, what I wanted at the time. A little too loud to play now flat.
FYI, the photo is the 2x12 version, "that I have.

44lg's review (This content has been automatically translated from French)

Good potato, collectible shot sr, made in usa hand made, a fact and it will be well aware ds riffs.Le the first manual, I do not know it is OK to have 15 years this amp.

I'm bad, I'm Nation wide .... and yeah, Billy Gibbon's Himself has played on tubeworks! Imagine as I'm proud. So much for good blues drooling, it's nickel, for jazz, passes your way. And by the way, the photo on AudioFanzine is not good!

This amp, it will be happening gnration aprsgnration! report quality price? no matter, it is not for sale, it is a holy relic that animal! with the exprience? wait, let me a few years to our answer ... Meanwhile, I played on of the SRV, Jimmy Paul, and other no-One!! if you find other tubeworks rt 2100 , tell me, waiting .... good vibes.