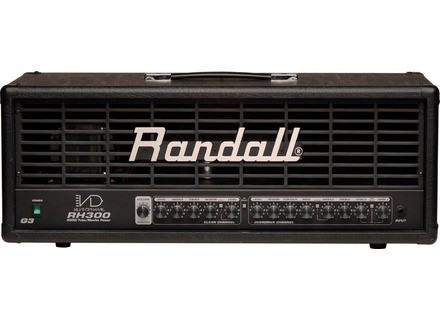 Randall RH 300 G3 Plus
4
(Originally written by hugues blanchon/translated from Audiofanzine FR)
- Hybrid amp with one 12AT7 tube and mosfet circuitry.

I give it an 8 because a perfect amp would have a third channel to get a good rock'n'roll crunch.

- The settings are not very easy for a beginner. With the sweep control, all the voicing possibilities, and the master and channel level controls the amp it can be a real pain in the beginning.

- You'll easily get a good sound but to get an optimal sound, you'll need time... It has a pretty exaggerated low-frequency response so you'll have to control it (2-3 for clean sounds and 5 for distortion sounds... Otherwise, just play bass guitar...)

Average dynamic response. I guess that has to do with the low-quality speaker...

- I play in a black and death metal band and this amp is perfect for this sort of music...

- I play a mahogany LTD Eclipse 500 with EMG pickups. I had the opportunity to try out the amp with a Schecter Hellraiser and the sound was also very good (even better in certain cases...)

- The clean sound is well-defined and crystal-clear. Even though you don't get the character and warmth of a tube amp I still like it, but do enable the boost otherwise you'll get a poor dynamic range.

- The distortion sound is good but difficult to shape:

First of all, avoid "V" EQ settings if you want to cut through the mix, it's not a tube amp.

With these settings I get a full and heavy sound, accurate and sharp for rhythm parts.

The lead sound is clear and accurate but with a low dynamic range.

- The amp is not versatile at all, it's conceived for heavy metal and nothing else.

Don't except to get a typical ACDC or Guns and Roses sound, nor a good blues rock sound. The response is too clean and with a high-gain...

- I hate hollow sounds with imposing lows (and this amp can produce enormous lows, especially using the voicing switch). I hate that heavy sound with no dynamics and nuances!

- The main disadvantage of this amp is the lack of dynamics but that's due to the low-quality speaker... which I will replace with a good one!

I give it a 7 because the amp is just alright, average.

I will update this review when I change the speaker to solve the dynamic range problem.

I will make another update after my first live gig with it...

It's a good idea to use a distortion pedal, the result is great. I wanted a less metallic sound, more vintage with stronger mids and character (I play in a melodic death and black metal band and the amp sounded too much like modern thrash metal or hardcore).

I used it with my Electro Harmonix Metal Muff and the sound became more precise and clear (no more overemphasized lows), well-articulated, very accurate and with more warmth and character.

I used the pedal with the clean channel so I could boost solo parts and strong passages for some songs.

I haven't tested this setup with my band yet...

- I like the sound character and the comprehensive controls even if some settings are useless. The amp has a poor dynamic response compared with an all-tube amp.

- I previously tried out several other models: Randall RG50 (yuck!), Randall G2 (very good but discontinued), Randall RX (nice budget product), Peavey Valveking (I don't like the distortion sound), ENGL Screamer (amazing distortion sound but only one EQ section for both channels so it's impossible to get good clean and distortion sounds...)

- Virtually unbeatable value for money in this category, especially if you need a good clean sound.

- I don't know. If I had had more money I would have bought the Randall V2 amp head and a cabinet with V30 speakers!!!
Did you find this review helpful?yesno
»

hg6990's review (This content has been automatically translated from French)

Randall RH 300 G3 Plus
4
-This amp is a hybrid, there is a lamp that directs a 12AT7 circuit mosfet.
http://www.randallamplifiers.com/about/news/valvedynamic.asp (for the curious.)
This head-dlivre 300 watts transistor.
Connection-level there is a effects loop with the knobs for the CONTRL, an output line out and footswitch pm 4 entries.
-This amp is fitted with 2 channels and a master spars gnral:
-A clean channel with 3-band equa (mid / bass / treble) a boost, a CONTRL of reverb, a volume.
Saturated with one-channel 3-band equa + knob sweep and possibility of voicing (switchable), a volume gain of two knobs (switchable.)

(I put 8: For the amp I would be perfect channel for AIM troisime a good rock&#39;n&#39;roll crunch even if it&#39;s more or less possible because of two SETTING THE gain.)

Frankly, the configuration is not a great way to beginners: between the knob sweep of the possibility of voicing and quilibrage gnral between the master and the level of each channel c &#39; is a little mess to beginners.
-Is obtained relatively easily for a good sound but the chopper has its best takes more time ... the bass is REALLY tufts and are therefore of rduire Manir drastic (2 or 3 in clean and 5 in saturated if not, put you on bass ...)
In addition the dynamics is more than average but I was put on the account of my cabinet is mdiocre ...
Since I use a pedal to Disto (Electro Harmonix Metal Muff) on the clean amp, I have a thousand times better dynamic sound pretty close to the end.

-I play in a group of Black-Death metal so this amp is perfect enough in this area ...

-Right now I use over my LTD Eclipse 500 + EMG mahogany, I had the opportunity to try it with the Schecter Hellraiser the other guitarist in my band, good c&#39;tait trs also (see more in some cases ...)

-The cleans are clean and crystalline, it was not stamped and heat lamps but they fit me well, for it is mandatory to engage against the boost if it&#39;s really flat.

Trs-Saturation is nice but hard rgler:
First exit the equation V if you want to be heard: it is not a light amplifier, the dynamic is average.
I saturated with personal highs and mids almost bottom (sweep ditto), and low distortion 5.
I was with a full and trs heavy (no need to drop), and trs prcis edged rhythm.
As lead is clean and trs prcis is apprciable with this dynamic plutt still low.

For-against this amp is versatile for a penny: it is made for metal, period.
Do not look for a crunch of ACDC, Guns and Roses & Company, a clean and well-typed blues rock and warm, it is too clean and hi gain for typ a. ..

-I dtest the dig in the mediums with low standards that some have with this amp (especially with the voicing switch) is standard, flat, dynamic and without nuance, yuck!
-What I soule with this amp is its lack of dynamics, but it is probably in large part to baffle mdiocre branch in which it is ... which I hope will be a quick change speaker worthy of the name!

I put 7 because after all this amp a lot of default, but that does not mean that the sound is bad in itself, just trs typ.
I&#39;d be told when I chang the cabinet to see if the problem of dynamics had l.
I would do another when the receiver has made his first concert, see what gives live ...

Do not hesitate to use a good distortion pedals connected between the amp and guitar, your exact is really great: I was looking for a sound mtallique least, less modern and more mediums grain (I play in a group of Death / Black mlodique and I found the sound too typ Modern Thrash / Metalcore).

I plugged my Electro Harmonix Metal Muff and the sound is much clearer, better mean what happens (more bass patches), a better articulation, and with the fine grain of the same when you stay Randall super prcis, with real heat gain and grain, and presto, magic! It immediately sounds much more dynamic!

In addition to a, as you clear your canal, you can use the Clean Boost which gives really nice about the results to boost solos and really bring out the highlights in the songs.

APRS I have not had time to test this config group rsultats ... as I would a new edit.

was 3 months I play this amp with my new guitar, a Gibson Les Paul Studio, and many compartment Ltd. It is the thundering to note how the rendering is Different.
Dj thanks a violin more bright (table stocky, key rosewood) and overall better quality exit the Metal Muff, prsence in the upper midrange and dynamics is l!

No need to tell you about Cleans become more bnien mlodieux and warm.
Saturation level, the distortion shuffled very modern edge and a cold end instead of the Les Paul Vintage trs is interesting (well the studio is far from clear a MODEL but compared Vintage LTD , ca dj is great.)

In short, the mahogany body and the "fat" of the Les Paul can have a really big, but the edge of the cot rch and Randall rquilibre balance Vitantis him to leave in a given soft boueu.
In addition, this shuffled Vintage / Modern gives the trs in the upper granular mediums (for the Black / Death gnial it) and it was always something the limit of two sound worlds: ca remains sharp while both large and granular and trs was good in the low mids prsence: bass without being tufts, bright without being shrill crillards.

FYI I get the following Describes with rglages (DGCFAD agreement, a tone below the A440, then, and 12/54 strings.)
Treble 7, Med 4 (with the voicing switched to accentuate Highs Meds, the knob is 7) Bass 4 (ample) and OD 1 rgl mid race (ca spit, and it trs sufficient especially for precision.)

-I bought beginners August 2008
"I loves her cot full grain and even if I regret some of the useless rglages and lack of momentum over a whole lamp.
"I had tried many MODELS: Randall RG50 (yuck), Randall G2 (very good but is no longer) Randall RX (nice but does not compare), Peavey ValveKing (I not her distortion) ENGL Screamer (a distortion of crazy but the fact that four is common to both channels prevents combine a good clear sound and a good distortion, not for me ....)
-A 600 euros a head, in this style, hard to beat that price, especially when one insists on a clear, workable: what price the amp the lights are not really terrible ...
-A will be ending for a year I use it and I regret not having a price combo lamp, because the head baffle config trs is cumbersome, it is the best transistor on which j &#39;ve jou but this price I might be better now because of a busted lamp OCCAZ good.

Edit:
was a year and a half that I used with diffrent guitars and I tried many combinations, honest, I know little about his record as a group (galre to find a room r qt) and frustrates me having to use the amp in moldy rooms RPTES dj team.
Nanmoins I prt of several friends who spent much rgl in concert and it is frankly hear!
APRS rendering alone is good trs Do not hesitate if you want a high gain amp with a real sound (the difference of 50 or RG Valveking) and not expensive.