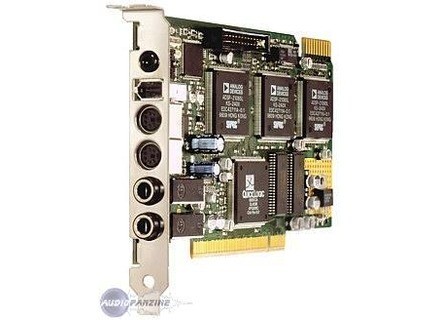 Pachasurf's review (This content has been automatically translated from French)

Creamware PowerSampler
5
The DSP make the difference with other cards.
THIS IS actually a Creamware Luna, but with a powerful software sample: powersampler.
I use it with a duron 1.3 gb, a Via chipset, 512 MB RAM, a Seagate 80 GB HDD and keyboard MC-61 to control everything.
Powersampler I use to run the VST synths and sampler creamware (really awful!), The sound comes out of another card (Terratec DMX 6 Fire) to my amp in RCA.

Admittedly, if the facility poses no particular problem, the configuration is very laborious. It took me a dozen hours to digest the manual and get a rsultat satisfactory.

No problem of stability up to Submitted.
I can run five or six VST (not too greedy) together without problem,
all with a latency ngligeable done everything (I do not remember more! so this settings is no longer part of my problem).
The software is top notch, scope notament merger with HUGE possibilities.

I use it for three months, and I feel that I am not at my surprises (good j'spre ...)
The DSP is really a great asset, my system does more than train ds that I waste a bit of VST. The quality of the converters is satisfactory trs. The price difference with the more affordable cards is amply justified.
An excellent choice for those who want to do everything on their computer.
Did you find this review helpful?yesno
»

jamychanprod's review (This content has been automatically translated from French)

For a PC dedicate, or in a creamware scope. As against the catre do not like having the concurence! Do not have another sound card in the same PC! I had a yamaha SW1000XG, and after installation powerSampler I have to choose between one of two!

config of the era: AMD 600Mhz (900Mhz and one later), Windows 98se, Cakewalk and ModPlugTraker, (then with fruityloops)

Installation not obvious, especially if you do not have internet (creamware application has a serial recup. On the net, but the procedure is very abstract!? Do not lose hope after installing ca is the lost time!

Unfortunately the card is UNSUPPORTED with some others! but if it is the only PC sound card there is no problem!

manual fairly light and not very useful to solve some problems!

The drivers are stable and the card generates audio channels provided by intrene!

The update is definitely needed if you want to upgrade your system!

With FruityLoops, the result was quite impressive both in latency audio quality!

Any effort to get it all! but it's worth it! THE SOUND IS INCREDIBLE!
At the time I never listen 24/96Khz, t and I blow through the dynamics and definition of sound! But I recouter prod. and more silent qu'vidente difference!
Also a good qualitprix, if it was compatible I will have WindowsXP gard longer!
Did you find this review helpful?yesno
»