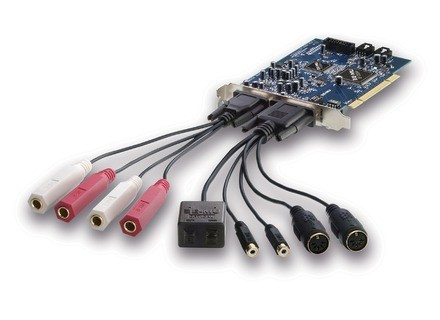 E-MU 0404
5
Well it does have two ins and two outs which is perfect. If you get the Audiophilie 24/96 it will only have one in and one out. And both of these soundcards cost a 100 bucks which is cheap if you have a tight budget. the only thing that was missing was the multimedia speaker connection which was a huge hastle to get. thats the only downfall of this soundcard.

Well its easy to install but you have to know some breif knowledge about computers cause the hardware goes into your pci sloy and you gotta know where it is but it tells you that in the manuel when you buy it.

Well basically first things first if you don't have a mixer you might as wellput it back on the shelf until you have the money to buy it. Cause thats what happened to me when I brought it. SO users beware whien you but this soundcard it dosen't support regular multimedia speakers you muat have the mixer. or a y adapter which is impossible to get unless you order it from the internet on E-MU website. The sound quality is excellent no problems and complete zero latency which is super if you need perfect studio production.

Originally posted on FutureProducers.com
Posted by: Earthquake ( 7-, 2005)
Did you find this review helpful?yesno

For $100.00 USD you can not beat this sound card anywhere on earth. I have seen them on sale for as little as $70.00 the most fantastic thing about this card is the sounds that come along with it. PROTIUS-X LE is a light addition of a E-MU product that has over a thousand sounds about thirty drum kits and massive synths and abouve all else it has greate sounding horns!!! It is Perfect for the beginner to expert. It comes with a varity of audio programs such as CUBASE LE my fav. sonarLE and ABLTON LIVE LITE not to mention all the other plug in effects. try it I recimendit to all my students...

Originally posted on FutureProducers.com
Posted by: Patricio ( 4-, 2006)
Did you find this review helpful?yesno

wenderssoul's review (This content has been automatically translated from French)" Galley"

I used it with Cakewalk (Sonar) Band in the box ...

While there, I rowed, even a computer professional has ever came.

I used about 1 year and then I dropped, here I was disgusted sound cards. I went to mix usb, qué happiness.

lucbessou's review (This content has been automatically translated from French)" disappointing"

on XP drivers are not stable I re-installed every week
I have beautiful go to the website and take the new drivers no improvement
recording a score of tracks simultaneously the sound quickly becomes fouillit, not even by a precision mix with separate outputs in the mix patch
only the emulator vx and x have an interest with its controllers foisons same sound output really remember synths of the time

I have over 3 years the value for money is interesting but if it again I will not be me price on the head with this product it is better not that I calculated the time I lose by re-installing the drivers still want this morning ...
I see with the other manufacturer that is easier

E-MU 0404
Very little used, but very functional for all, starting in computer music!
Used, among others, on a PC of my design in video editing!

The two input / output (6.35) can be folded downwards, I suggest, in my view, to put the card in the lowest PCI slot!
This will not leave her dangling cables and so "broken" the basis of Jack!

The card itself, consisting of processors, one for and one for PatchMix integrated DSP, which launches for the regulars, via suitable icon shown in the task bar in the system!

In test and use:
While a transparent world, like E-MU knows how that will delight both users, the beginner, experienced, where not!

All, does its job, as have asked and no exception to the rule of extreme use, see silent without heat too, such as the rack of my 1820M!

The PatchMix providing only the only I / O included with the card and its extensions, it is still possible to connect to the back of the card that either Jack 6.35, Midi and other coaxial or both to once!


A bundle of soft but is included in the carton, may have then immediately put to work and start to mix with his sequencer of choice.

To his way of a comprehensive and detailed usage ...


PS: I sell today, since most widely used, because of the change of PC, if anyone is interested ...

veda95's review (This content has been automatically translated from French)" For the price, unbeatable!"

E-MU 0404
4
At the time I was only very small ways and it was all the same in terms of well equipped came out, and integrated dsp is sacred anymore!

I used to catch channels and for the price, it made me very great services.

The drivers are stable, everything works fine and plugins presets and backgrounds are nice and helpful when have started.

Some crackles at low latency plugins, but quickly finds parades, using reverb dsp provides example .. they replace it with one of his choice to the mix.

Nickel interface a little hard to understand at first, but after it's all good!

I had to use 2 years, I record my first album and I must say that for a small budget it's worth it!
Did you find this review helpful?yesno

I'm working on ableton live with, and I have a EMX1 the midi ports.

Dars stable under Windows 7 32 and XP. Never tried in 64bit.

I use Ableton Live and Reason.

Live on with the emx, I went down to 2ms latency, but this posed problem with passing a Reason 3ms.

I do not use the recording channel.

easy to install
by the cons is a bit obtuse ligiciel.

I did not use thrust of the card, I just use the function midday.

no black spot can be had from the connector, it makes two bunches of cables, I have preferred to be separated and only the branch that I use.

I will ever buy if the opportunity presented itself.

Geo la bidouille's review (This content has been automatically translated from French)" For the price! ..."

E-MU 0404
3
Internal sound card, entry level, very proper for the asking price, installation is easy, the PatchMix is ​​a bit complicated for my taste!

The drivers are relatively stable, it works fine in Live and Cubase but sometimes no sound is heard and we must restart the session from the management software of the card. I use it with 7 ms latency.

The control panel of the card is a bit tricky to master especially the routing (PatchMix) is definitely not intuitive. Personally I took the advantage of simplicity by using e no effect and minimal tracks, the ideal is to get its own session. Plugged directly into and out of my mixer.

I use it for some years and I have less and less of a problem of "stall" time! I do not think I would do that choice today as the market for sound cards has evolved significantly and prices have fallen dramatically.
One can find better without problems, even less expensive!

The drivers are stable? Hmm, need to reinstall every 2 months
They are often updated? Every winter solstice ^ ^
What software do you use most often? Ableton Live 7
How do you manage to read tracks simultaneously? 15/20 Audio or 10 big vst
What latency you get? 10/15 ms

The installation is done it without problems? Vui
The general configuration is easy? For my use Voui
Have you experienced any incompatibilities? not
The manual is clear and sufficient? Vui

For how long have you been using it? 4 / 5 Years
Did you try many other models before getting this one? SoundBlaster PCI 16-valve, Acts 97 & DSP24.

What is so special that you like least? The lack of gloss, clarity and treble. Inability to stack 3 DSP effects, which have yet to sound the air a lot (Beuzz, pops, dropouts)
What is your opinion about the value for the price? Well ... but at 50 € for ocazz ^ ^
Knowing what you know now, would you make the same choice? No, I plunge in illicit arms trafficking, I rob pharmacies & I would pay a FF800.

Jean-Hub's review (This content has been automatically translated from French)

E-MU 0404
3
Unstable drivers (since forced to relocate from time to time.
Level was monitored continuously if light saturation.

Install easy.
Not much to update as it seems necessary.
Config painful (PatchMix)

Use since 2006.
Very few crashes when requested.

- PatchMix boring
- Getting Started PatchMix long to boot the computer.
- "I have been necessary to reinstall the drivers for the card several times already
because I had no sound even though the VU meters (in the PatchMix)
indicated an activity card ... "Pb actually met.
- Its not always very clean.
- Fragile connectors (but OK if you connect or disconnect all day)

I think soon to purchase a map M-Audio instead.