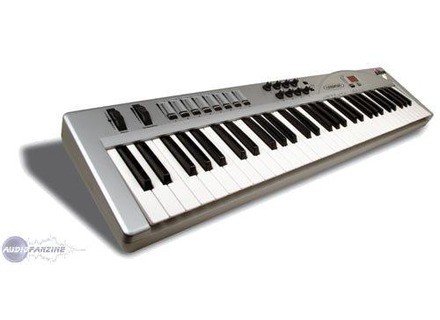 M-Audio Radium 61
4
The Midiman(now called M-Audio) Radium 61 is a 61 key, synth action keyboard with 8 knobs and 8 sliders. It is meant for amateur musicians to use as a way to input notes into their DAW of choice and play and control instruments within a DAW. It is USB powered(a nice feature, since you don't have to have another cord for the power). It has a USB port, midi in and out and sustain pedal jack on the back, though I've only ever used the USB mode. I've had no issues with the jacks or anything, and setup was pretty simple. The driver was easy to find on M-Audio's website, and the installation was quick and painless, and it worked like a charm after that. The board is of standard build quality, passable for sure but nothing outstanding. The knobs feel a little cheap, and don't turn a full 360, and the sliders are pretty awful, but I mostly bought it to put in the back of a van just to hash out arrangements on long road trips.

Setup was a breeze. I downloaded the legacy keyboard driver installer from M-Audio's website, installed it and was done. I just configured the DAW's I was using to utilize it, and presto! It worked! No complicated setups, missing or incompatible drivers etc. I've had no issues with it so far, regardless of whether it's plugged into a Mac, or a PC. Configuration is pretty standard for comparable Midi keyboards, as long as you have the manual you'll be just fine.

Overall this is a solid and usable product. I wouldn't tour with it, I wouldn't play a show or perform with it but it does exactly what it was made for: offering an alternative form of input from clicking in notes with a mouse in our DAW of choice. So far it has performed that function perfectly, and I have no regrets about the purchase.
Did you find this review helpful?yesno
»

Very easy to use and install

Gets the job done and it is a great value

Originally posted on FutureProducers.com
Posted by: xpliciit (January 0-, 2004)
Did you find this review helpful?yesno
»

M-Audio Radium 61
5
The controls are all there. pitch, and modulation wheel. volume and octave presets are nicely placed.

The interface is fine.

never had it repaired. to my knowledge the durability is strong.

i love it because the connection and set up with my software was real easy. basslines and even drum patterns feel just right with control.

Originally posted on FutureProducers.com
Posted by: zokid (January 2-, 2005)
Did you find this review helpful?yesno
»

Very easy to use and to add to your setup.

Love it, it was my first midi controller and I love it.

Originally posted on FutureProducers.com
Posted by: TheFirstJimBo ( 1-, 2006)
Did you find this review helpful?yesno
»
Read the 12 user reviews on the M-Audio Radium 61 »