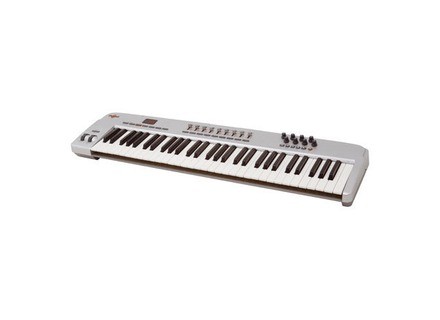 M-Audio Oxygen 61 (Silver)
5
What made me buy this 61 key MIDI piano was it's great sound quality and it's great MIDI function and also it's convenient DirectLink tools that connect directly to Pro Tools' transport bar and faders. This MIDI keyboard also works as a control surface because you can control the internal mixer Pro Tools' has. The keyboard can also play any sound you program in Pro Tools' XPand2! or any other instrument. The Oxygen 61 has a MIDI connection as well as an input for a sustain pedal and the USB cable.

The keyboard was very easy to setup and get going because once you have Pro Tools installed with its default configuration, all you have to do to make the Oxygen 61 work is connect it. The manual was very clear but it wasn't really needed because of how easy the setup was. The channel path is very simple as all you do is choose the instrument you want on a stereo instrument track and play the notes. The general configuration, as I said is very simple and it won't cause any problems.

The best thing about the Oxygen 61 is it's Pro Tools' compatibility and DirectLink because this allows you to easily control the volume and effects of your sounds and lets you choose any sound/instrument you want to play with the piano's keys. I believe the value is a bit too high, which is why I found it used at a lower price because 250 dollars new is too high for just a 61 key keyboard. The sound quality and precision is optimum and has velocity-sensible keys for your high speed musical pieces. This was my first MIDI keyboard and I believe I made a great choice because it has exactly what I wanted.

sebquid's review (This content has been automatically translated from French)

M-Audio Oxygen 61 (Silver)
4
For CHARACTERISTICS Retailer, visit the website of MAUDIO.
Connectors-MIDI and USB.
-61 Keys for enough space to play on the keyboard and thus possibility to split the keyboard in one or two areas
-A dozen presets that can be saved with the free Enigma
And especially a SERIES of MIDI Controller assignable compltement:
-9 Faders
-8 Pots
A bar-transport (tlcommande play, stop, etc ...)
-Many other buttons

I had a few months old by a midi keyboard prt collgue. The touch of the OXYGEN 61 has nothing to do. I have a much better sensitivity with him. on the other hand see anything with keyboards or other semi-weights. I regret that there is no aftertouch but for the price you cant &nbsp;ask much either.
Easy plug in USB MIDI Controller and easy to assign the knobs when you know a minimum MIDI. It comes also with a M-Audio free software (Enigma) which loads and save the MIDI setups on the keyboard.
It comes with a Manual &nbsp;but &nbsp;there's not much to explain about the &nbsp;keyboard itself. The difficulty resides in the comprehension of the MIDI peripherics and their relation with the presets.

I bought the beginners to OXYGEN 61 of t. I have not had the opportunity to use it too because the silent summer PERIOD conducive to other activities. Approaching the falls, I commend myself knowing that I use it mostly live, religious TASCAM US122 a sound card and a Dell. I connect the 61 OXYGEN, my microphone and my guitar through the TASCAM US122 on the PC and go. I use the faders as OXYGEN 61 faders for mixer rglage track volume. The pots allow me to paramtrer my virtual instruments and virtual effects for voice and guitar. Since I have this keyboard, I can put the laptop in a corner and do everything from oxygen 61. I win in flexibility and musicians in the group with whom I play seem quite happy not to have to wait hours for me to change my rglages with the Dell Touchpad. And like when I play solo to start my tracks prenregistres, looping, etc ... In short, the foot since I have this little jewelry that is really affordable compared to other products on the market.

Pquenin's review (This content has been automatically translated from French)

M-Audio Oxygen 61 (Silver)
4
What motivated my choice is the price (120 euros including shipping on a English site) and features: 61 keys with velocity, 9 faders, 8 knobs, 15 buttons: there are brief enough to do, and what is 'I had to help me deal with the computer.

It connects via USB or MIDI (MIDI OUT) and accepts a sustain pedal.

One may regret the lack of MIDI IN and THROUGH, Connector for an expression pedal, and afertouch keyboard. Personally, I do not mind so much. Each of view depending on usage.

The touch keyboard is nice, and well suited to use as I do, namely strum on the fly for ideas, and record in the sequencer PC.
For the stage, I guess there are better products, but it also depends on the style of music, whether or not we need a lot of nuance in the game
Rather, the appearance of the keys to me a little "disappointed" the plastic is dull and does not relieve a friendly feel.
For the rest (knobs, faders, knobs, buttons) the sensation is pleasant, with the right amount of firmness.
I have not read the manual because I did not need to program new assignments for now. I used the Enigma software (included with the keyboard) some time ago with another M-AUDIO (trigger finger) to do that, and I found it rather well.

Using Reason from time to time, I also downloaded the codecs for this software on the site of M-AUDIO, and it's magic, everything is pre-allocated as needed, roll it ...

I use it almost every day (1 hour or 2) for a week, I do not have much recoil when the reliability of the beast, but it seems well assembled and potentially robust despite its light weight (3.1 kg).
What I like most is at the level controllers, it is very complete: 9 faders which 1 is slightly offset to the level of the master track for example, 15 buttons including 6 dedicated to the transport functions ( forward, backward, play, stop, record, loop) plus 8 knob: it is comfortable.
I also like its lightness and compactness relative to a 61-key keyboard: I can use on the move with my laptop.
What I like least: the appearance of plastic keys.

The price / quality ratio is excellent even at its regular price which is around 165 euros.
And yes, I would do this choice at this price.
With over budget, or for a more pro, I would choose maybe his big brother Axiom 61 or Edirol PCR-800 one.

Anyway, for those who are new or have a limited budget, it's a safe bet.