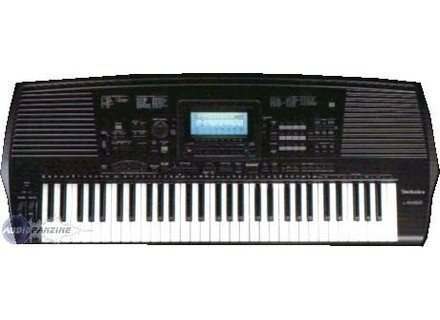 Technics SX-KN1500
5
Well... What do I say about the Technics sx-KN1500?
It was for sure the keyboard that I kept for most time on my set until now. I got mine in January/2000 - and I wonder if I could still have it.
The onboard sounds were OK, but since it was also a synthesizer, I could edit them the way I wanted and save on the user presets (from 201 to 240, if my mind is right). The styles were nicely elaborated, making the keyboard self sufficient - and yes, I could create my very own ones. I can't say much about the internal sequencer since I didn't used it too much - I actually don't remember ever using it, since I preferred using Cakewalk Pro Audio for that at the time. Talking about MIDI, the connectivity was simply the best I ever had - I think no current mid-level keyboard can do what the old KN1500 could do in terms of doing music through software sequencers.
Did I told that it has a built-in ring modulator? Yep. One of the most complex synthesis features - present in a mid-level arranger instrument. Is there any other keyboard on this category with that specific built-in effect included? I don't know.
I confess that I had some difficulties to learn working with the KN1500 at the beginning, considering that I was just a 17-year old student. But the user manual clarified everything, and in the end of 2003, it was like I was doing magic with that keyboard (!!!) Unhappely, some accident damaged it in December/2004 and there was no service that could fix what happened. Since Technics stopped to manufacture keyboards in 2003 (I still don't know why...), the repair chances were very little and the components were being way too much expensive. I ended up getting a new keyboard, but there was a lack of some features that only the KN1500 had before.
If there's a keyboard that I really miss and that I'd like to still have today, that keyboard is the KN1500.

EMahmoud's review (This content has been automatically translated from French)

General configuration very easy.
Editing sound is clear, despite the limited possibilities.
The manual is sufficient to identify its use.

For starters, I bought this keyboard arranger rather interesting quality / price ratio.