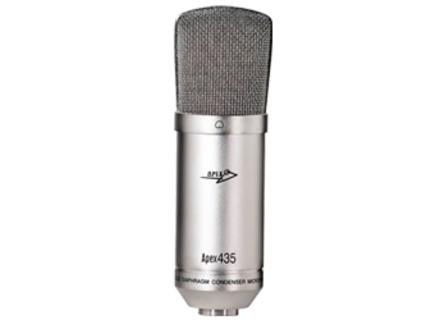 Product replaced by the Apex Electronics 435B.

Published on 10/24/13
An indispensable tool in any studio, condenser mics allows us to record vocals as well acoustic instruments. Today, many brands offer large-diaphragm FET condenser mics for home studios on limited bu…

Apex Electronics 435
5
Ive used this mic on many things including vocals. It works perfectly for anything in my opinion. It all depends on the sound you are going for in the end and if it sound good, why does it matter whether is comes from a 70$ mic vs a 1000$ mic. I have some songs ive made with this and here is an example.

in the song "otherside" i used this mic on acoustic guitar and vocals.
https://www.youtube.com/watch?v=Z5UdqEFrozc
Did you find this review helpful?yesno
»

Apex Electronics 435
5
I was ready to pickup a good mic for vocals and acoustic guitar. I went in today at lunch yesterday and the sales guy specifically showed me the Apex 435. I got the unit ar Long & McQuade for $70 CDN.

It has a low pass taper off, so it cuts out a good deal of background rumble and vibrations. It also, being a cardioid condenser mic picks up literally everything in the room, beautiful.

There is nothing to complain about, with the exception of the cardiod aspect (it is not interchangeable like the 420).

Tough, and made of metal. The cradle is rather well constructed as well, a little flimsy, but good quality nonetheless.

It is a well designed 48V condenser mic. Overall, for the price, not regretting it one bit.

Apex Electronics 435
5
I bought this mic at long and mcquade because i wanted an all purpose mic to mic amps and acoustic guitars, as well as vocals and overhead drums. I had originally intended on buying a shure sm-57, but when i got there the salesman I normally deal with told me that the apex 435 was hands down the best mic for the money. He also said lots of studio rats were using them instead of the $1000 plus tlm-103. I ended up paying $70 canadian for it.

Perfect sound replication and it picks up all the nuances of playing style and picking dynamics. Nice crystal clear sound for vocals, and worked equally well with male and female singers. Came with a reliable shock mount that was preassembled.

well it's a condenser and it's super sensitive, you need a really quiet environment to record in which is often unavailable. Would be no different with any other good quality condenser.

Well unfortunately it got the torture test when my mic stand came loose and it enjoyed a 5 ft freefall to concrete, to my amazement it still worked just as well as it did out of the box.

for home recording i wouldn't recommend another mic, if you buy the art tube mp mic preamp, you'll have a professional condenser mic setup for $160 canadian. doesn't get much better than that

Apex Electronics 435
4
The Apex 435 is an omni only version of the regular Mouse condenser microphone. I've used both of these mics, but mostly this version. The mic, obviously, has an omni directional polar pick up pattern and will gather frequencies in the range from 20 Hz to 20 kHz. The mic also has a built in mic stand adapter on it's underside.

The Apex 435 is up there as one of the best room microphones I've ever used. It's perfect for this applications because it is indeed omni directional and will pick up sound from all angles. This helps to capture all sorts of reflections and really gives you a nice a roomy sound, even when you're using it in a small room. One of the producers that I work with frequently has a set of these and he uses them exclusively as room mics and I really can't say that I blame him based on the results. I honestly haven't used the microphone for much more than this. However, I have used the regular Apex 435 , which I believe is the same exact microphone in a cardioids pick up pattern, and that's a great mic for vocals and other things, so it's possible that this is just as good for similar applications. However, due to it's omni directional pick up pattern, which isn't adjustable, it's not surprising that you'll see this version of the mic mostly used for room mics and other applications where you want sound from all sides. This does limit it's capabilities a bit, so if you're looking for an all purpose condenser, it's probably a safer bet to go with the the cardioids version of the Mouse. Having said that, these are excellent mics for what they are and should definitely be checked out if you're looking for a pair of stationary rooms mics!

Did you find this review helpful?yesno
»
Read the 30 user reviews on the Apex Electronics 435 »

Listen to the 7 audio files about Apex Electronics 435 »

Apex Electronics 435 manuals and other files