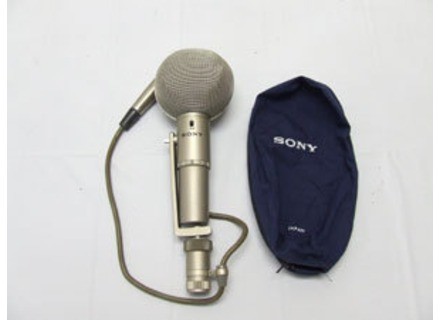 Sony C-500
5
The Sony C-500 is a vintage, large diaphragm condenser microphone. It's definitely best suited in the studio, as I wouldn't use this outside of a studio since it's older and isn't meant for this kind of use. The mic has a standard cardioid polar pick up pattern and has a frequency range of 20 Hz to 20 kHz. It has a built in XLR cable and mount, and also has a -8 db pad on it. In addition to this it's got two low cut filters for the attenuation of low frequencies when needed.

There aren't too many Sony C-500's out there, as it seems to be a pretty rare microphone. For those who have used it however, it's definitely considered a high quality mic and for a variety of purposes in the recording studio. I don't know exactly when these microphones were made, but I believe first in the late 1960's and into the early 1970's, although I'm not 100% sure on this. I don't think that they were made for a very long time since there are so few of them floating around. The one that I've used was at a recording studio where I recently did a freelance session as an assistant engineer. We used one of these mics for a few different purposes, as it was a general overdubbing session. The first thing we tried it on was acoustic guitar, and we liked it a lot so we ended up trying the mic on a few other applications, as this was my first and only time using it. The engineer also hadn't used it in the past, so we were kind of just getting our feet wet with it. While nothing sounded as stellar as the acoustic guitar we recorded with this, we also got a very nice vocal sound with it. The mic has a uniquely shaped, circle diaphragm that makes it easy to place for all sorts of different applications. The C-500 is definitely a versatile condenser, as I wouldn't hesitate to try it on anything that might work well with a general condenser mic. Good luck finding one of these, but if you do definitely take advantage and try it out if possible...
Did you find this review helpful?yesno
»