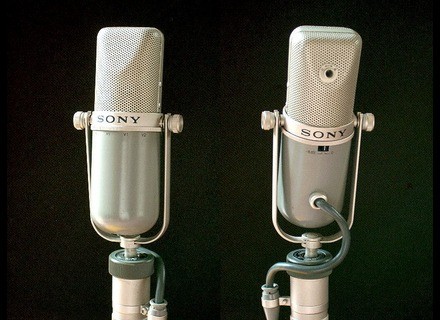 Sony C-37 FET
5
The Sony C-37 FET is a large diaphragm condenser microphone for use in the studio. The mic is obviously a FET version of the C-37P microphone. I've used both of these microphones independently, but have never had the chance to shoot them out so I can't talk much about the specific differences in sound. The mic has a high cut filter and you can toggle pick up patterns between omni-directional and standard cardioid. I wouldn't use this microphone outside of the studio.

The Sony C-37 FET is an overall great microphone. For those who have used the C-37P and not the FET version, this is definitely in the same ballpark and is a mic that has similar applications as the non-FET version. I've used this FET version for recording vocals and strangely enough the only other application was for recording a floor tom. For both the mic sounded good, but vocals is what it really excelled on. I know the C-37P is a fantastic vocal mic as well, so this one shares many of the same qualities there. I would think that there aren't as many of the FET versions out there since I've only seen the one that I used. Either way the C-37's are incredible microphones and are worthy of using in both forms. I wish that I'd have the chance to try out the FET and the original C-37P side by side, but I don't see that happening any time soon as the only time I've used the FET version I was in a huge studio and there wasn't any time for trouble shooting. Both are awesome microphones but definitely don't be shy with the FET if you see this in a studio's microphone cabinet instead of the original C-37P as it's great in it's own right!
Did you find this review helpful?yesno
»