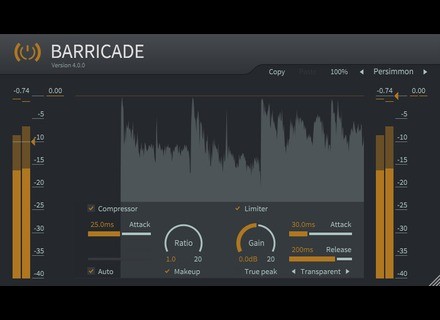 ToneBoosters TB Barricade 4
5
What configuration, software and musical style or context do you use with this plug-in? What do you think of its stability and overall performance?
Intel I5 4460, Presonus studio one 3
After 1 week testing it, no bug, a riduculously low CPU use (2%) compared with ozone 6 IRC 3 which takes up 25%, and a 3ms latency (Ozone IRC3’s latency is 167 ms)

Is the plug-in easy to use? Is the user manual comprehensive?
The plugin is very simple, the manual is OK

Is it efficient? Do its functionalities and features perform as expected?
That’s its biggest asset, especially considering its 30€ price tag.
Except for the realbuss I’ve never been a big tonebooster fan, I never quite liked their EQ, Isone… And with Barricade I couldn’t reach the results I got from an old PSP Xenon or Izotope Ozone.

But I must admit the dev has raised the quality of its limiter in this new version, it doesn’t pale in any way compared with the most expensive models (it’s almost the other way around).

I’ve owned a lot of VST limiters:
- AOM for one year
- IK Stealth, used at a coworker’s: it first comes with a WAHOOOOO factor, but after a few months on projects involving more complex limitations an in spite of keeping awesome punch, you can hear light saturations and it doesn’t please your ear as AOM does)
- Nugen, which I tried for a long while: it tends to have the sub frequencies disappear, apart from it it’s a good limiter
- Fabfilter Pro L: very nice GUI, but it tends to provide a “flat”, sometimes saturated sound
- Ozone 5 and 6 IRC3, which remains my favourite limiter, keeps the signal punchy but takes up a lot of CPU resource. It replaced the old PSP Xenon.
And many others…
But the Tonebooster’s V4 is very surprising, as for its consumption it provides a really great sound, and used in auto clean mode it almost doesn’t saturate at all on a drum loop which I use to test all limiters – a test which many of them fail.
Compared with the others, I’d put it in-between Ozone and Xenon.

What are the pros and cons of this plug-in?
+ ease of use
+ auto modes with the 4.1 update
+ its sound
+ CPU consumption
+ ergonomy
+ true peak , which certainly is the most efficient on all limiters
- lost options such as stereo link

(as for the compressor, I never understood why it was there)

Audio samples of limited loop in the media section (with Ozone used as a reference) at a 3dB reduction – which is not much.
Did you find this review helpful?yesno
»

Listen to the 10 audio files about ToneBoosters TB Barricade 4 »