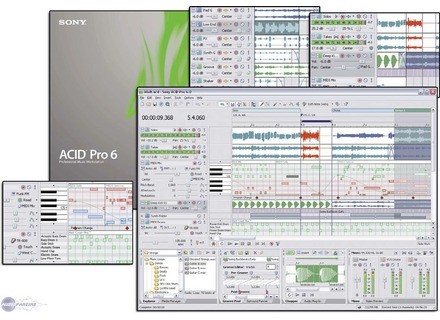 Acid Pro 6, Loop Sequencer from Sony in the Acid series.

Sony Acid Pro 6
4
Sony Acid Pro 6 is really easy to set up and get started. You may need to pull out he manual if you have never used computer recording and editing software before. But this program is a great starting point for your home setup. You can use virtually any plug in with this software without it crashing which is key in today’s recording world because no matter what your main sequencing and recording program is you still like to rewire other programs with your main one. Sony Acid Pro 6 gives you full control over the project you are working on. The manual is extremely easy to understand, its almost to easy.

Sony Acid Pro 6 is probably one of the easiest softwares that I have ever used when it comes to computer recording and sequencing. Son Acid Pro 6 is for the beginner and the intermediate musician and/or producer who is looking for a great program with great quality. Mixing and Mastering your tracks are a breeze with Sony Acid Pro 6.

Overall Sony Acid Pro 6 is a great started program, it has a lot of effects that you can use. But not as many as some other computer software’s, Sony Acid Pro 6 almost seems to be like a watered down version of some of the other softwares I have used. The price of this software is great, and very affordable. But you will need to invest more money into some plug ins and vst’s. Because the ones that come with Sony Acid Pro 6 aren’t going to give you the “wow” factor you might be looking for. But this program will definitely get you started with your career as a musician. I am very happy with Sony Acid Pro 6 for the year that I have used it, it worked like a charm.
Did you find this review helpful?yesno
»

Sony Acid Pro 6
5
Installation on Windows XP was done without difficulty and quickly. On Vista it is a different story ...
I'm not a fan of the Media Manager so I uninstalled afterwards. I regret that there is no option for the installation does not install.
The manual is in English but well done.

I'm running this software on a laptop equipped with an Intel Core Duo (2x2ghz) and 2GB of RAM.
It works well, I have not yet encountered of problem, no crash.
The app takes very little memory, it is very fast (not like Cubase SX ...). The interface is pretty basic but after all it is not to make the audio to enjoy the scenery!
VSTi work well, the only small annoyance I encountered lies in the rglages some virtual instruments is not saving properly. Also some bugs with some VST plugins (including GUI thereof)
The setup is extremely stable.

I use Acid for 5 years and this version since its release (ie 2 years).
The arrival of multitrack recording is a true advance. Is approached more and more professional DAW.

I highly recommend this software esprant that Sony will continue its efforts to improve Acid and allow it to accder the rank of professional DAW.
Did you find this review helpful?yesno
»

software requires very little resources, very stable even with a small config and a small bundle of vst

I started working on it to version 4, circa 2005
I've also been working on FL Studio and Reason
Plus: A must for music production, sampler, looper, which for me beats hip hop is best if you chose a config bw / midi controllers rather than a kind mpc sampler
The least: it will nikel to make beats, on the other hand when it comes to record a voice or instrument (and even vinyl sampler!), Back right away to cubase, nothing to do in terms of decision sound, and treatment (management is disastrous effects on acid and if anyone has figured out how to make him digest vst external effects, I am takers, after years of use I threw in the towel !)
Having paid 50 € for a mate, I judge the value for money at the top. After seeing how the software is at the top for sampler and looper, I would have invested even nine eyes closed! .
wholesale to produce well, not great at all to record

thenoizzbox's review (This content has been automatically translated from French)

Sony Acid Pro 6
5
Installation was no problem and Droulez Acid Pro 6 has recognized all my VSTi synths and my belongings.

AMD Athlon 1 GHz with 1 Gig of RAM. My soundcard is a SoundBlaster Live Platinum 5.1 which runs with the kX Project drivers (much better than Creative).

As you see, I do not have a machine art, my computer was about 5 years and Acid Pro 6.0 trs drives well and even better than Acid Pro 4.0f which is the version I used before. Sony has done a great job of optimization of performance for this release.

APRS less than a week of use I can say, acids dja Pro 6.0 will replace compltement Sonar PE 4.0 for my needs. I ever apprci interface Acid than Sonar 6 but version of Acid is now a true squenceur which is no longer limited to the loops and that has nothing envy the COMPTITE. I did use a limit of Acid before but this version vhange all.

The interface is a rare and lgance an easy to use copy. The new edition features MIDI are approachable and efficient trs. The list of new features is impressive but the impression General for flexibility and stability which makes it by far the best version of Acid that day. Sony Arussi will integrate almost all the features requested by users for years. The comptiteurs Sony should take notes ...
Did you find this review helpful?yesno
»
Read the 6 user reviews on the Sony Acid Pro 6 »