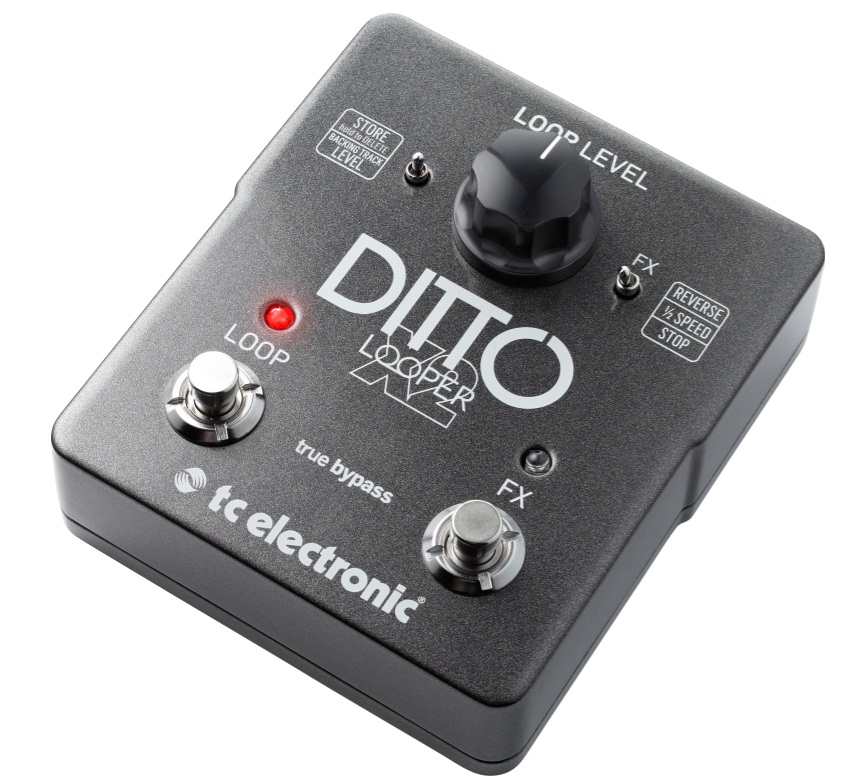 The Return of the Same Thing

Following up on the success of the original Ditto, which had only two controls, TC strikes again with the X2, featuring more than twice that. Can it give the final blow to its competitors in the not-too-expensive loopers market? Read more…

TC Electronic has hidden Easter Eggs on its website, if you find them, you could win gifts!
04/14/14

Since this is the first review on a device of a new genre, I will be as precise, especially as the user manuel (to be downloaded from TC's website) is not as clear as it seems - just like the device itself by the way.

The compact user manual is a pdf file with a better layout than this very paragraph: I have edited it as a personal memo, provided you undesrstand French I willingly share it with you at the following address : http://1drv.ms/1BuAMux

It is a bit subtle at first, but it soon becomes automatic after tapdancing with it for some time. Starting from scratch, both LEDs off:
- activate once the left (......
Read more
See the detailed specs on TC Electronic's website.

Since this is the first review on a device of a new genre, I will be as precise, especially as the user manuel (to be downloaded from TC's website) is not as clear as it seems - just like the device itself by the way.

The compact user manual is a pdf file with a better layout than this very paragraph: I have edited it as a personal memo, provided you undesrstand French I willingly share it with you at the following address : http://1drv.ms/1BuAMux

It is a bit subtle at first, but it soon becomes automatic after tapdancing with it for some time. Starting from scratch, both LEDs off:
- activate once the left ( "Loop" ) footswitch to start recording a first loop (-- red LED on)
- activate a 2nd time to end the loop that keeps being played (-- green LED on, blinking when the loop ends)
- activate it a 3rd time to record an overdub on the previous loop (-- red LED on)
- do it a 4th time to end the recording of the overdub (-- green LED on, blinking when the loop ends)
- following pairs of activations of the footswitch behave as 3rd and 4th time for additional overdubs

To stop the sound, with the right selector on "Stop":
- activate once the right ( "FX" ) footswitch (-- left green LED blinking, signaling a sound is ready to play), or activate twice the "Loop" footswitch (but it is less precise and lets unwanted sound be heard in between - a flaw already present in the first Ditto).

To restore the last overdub ( "Redo" ):
- same as fo "undo", long press while the loop is playing (a short press will record a new overdub).

This Undo/Redo feature is useful and convenient. Please note that the original loop remains the basis, unmodified in length, though you can overdub and punch in/ou at any moment of the said loop.

Ditto 2 contains two memory slots, read simultaneously:
- slot A ( "Loop" ) is where the live loops are being recorded
- slot B ( "Backing track" ) is where the files that transit to and fro the Ditto and a computer are stocked. The files (all named "Track" ) can be wave, aif or mp3 files from the computer or wave or aif coming transferred from the "Loop" slot.

Ditto's memory keeps both the contents of the A and B memory slots when unplugged.

The "Backing track" feature
To save in slot B a loop recorded in A (hence saving the latter):
- short press the "store" handswitch (-- the left green LED blinks quickly for half a second). This erases any content already stored in "B".
Ditto then plays simultaneously the "A" loop and the last file stored in "B" (the sound level of A can be changed at anytime using the loop level knob, that of B requiring to use the level knob + handswitch on "level").
A only contains the loops recorded as described earlier for the basic "loop" features, in parallel to the backing track which is the constant reference which will be played again and again.
The "backing track" stored in B is not affected by the "Loop" or "FX" footswitches, and can only be erased by a long press on "store".

The handswitches are located on the left and right sides of the knob:
- a short press on the left switchstores the loop in B, a long press on it erases everything (as was already described).
- the right switch switched up or in the middle position makes the "FX" (right) footswitch control the half-speed (green LED on) or reverse (red LED on) features. Pushed down, the same right handswitch makes the same footswitch control looping.

Effects
When the FX handswitch is used to select either of the two effects, activating the "FX" footswitch starts or stops the same effect, no matter whether the loop in playing, being recorded or stopped. Overdub can be done forward, backward, at half or double speed, and the LED blinks alternately in green and red (a real Christmas tree) with both effects on.
No limit!

Stereo
Everything is doubled, including the two memory banks, so we have 2 devices with a single recording and playing command.
If the guitar is plugged in the "mono" in with nothing in the "stereo" in, the mono signal entering is identically duplicated to both outs, including in "bypass" mode.
Any instrument plugged solely to the "stereo" in is only routed to the "stereo" out
Plugging two different, mono instruments on each of the "in"s leaves them independent, each will have its own dedicated out even in "bypass" mode.

A stereo backing track stored in the "B" memory slot comes out translated in mono if only one out is being used.
Combinations are almost endless...

Quality and conception
- the footswitches are soft and look sturdy. They're very sensitive as contact is done after only 2mm, with no hardpoint, allowing for an esceptionnal precision, no need to stomp violently. Beware not to wear too large a shoe so as not to risk switchinh both unwillingly.
- as usual with non-slanted pedals, activating the footswitches requires to lift the whole leg, which (for a guitar player) can soon become exhausting. A little DIY can help here to make things more comfortable and also to make the LEDs more visible and the knob easier to reach. The wedge I use can be seen here https://flic.kr/s/aHsjXnEY6f , and another (more elaborate) version for an Xotics RC Booster here : https://flic.kr/s/aHsjPdJw2c .

- the handswitches are small and compact. The left one (3-position, spring-return) is a bit hard. They are fixed straight to the electronic circuit, not on the external case - a benign exception to the general high building quality of the whole.
- the level knob is great: huge in size, shaped for fingers, the white mark on it can be seen from 6ft above. Too bad there is no mark on the box itself, though - no, I'm just splitting hair.
- connectors aregathered on the upper side of the box, which is a great choice which avoids cables to take too much space on both sides - a problem too often encountered.
- the box is made of sturdy molded aluminium, the paint reminds of that of a luxury car. The good taste of the discrete, metallic, dark grey box color is not to be discussed - we don't care btw, only sound colors are relevant.

It seems quite logical to use the Ditto in the amp's effect loop, at the very end of it, so that the initially recorded loop's sound remain unmodified by any other factor (effects, hi or lo gain amp in, amp settings...) that will still be useful to shape the overdubs. In case you don't have an FX loop, the best is to use the Ditto last in the chain, just before the amp's input.

Both the true bypassed signal and recorded part sound transparent, no color or spectrum, no gain in highs or lows.
No difference can be heard on a studio stereo amp (the loop is also recorded on the second channel, which couls have been thought of as a mere bypass).
No much more to say here, the signal is perfectly respected.
I even unwillingly tried the true bypass in reverse order after inverting the in and out jacks by mistake, it works just the same in both directions!

A real pleasure to be able to add counterpoint high and low funky riffs on a series of bossa nova rhythm changes, for instance. Of course the mix shouldn't be overloaded, but this device can be used to record a whole musical piece.

What makes His Excellenct Ditto II better than the first is the ability to stop a loop by pushing the second switch only once, and the possibility to erase it by a long press on the very same switch, hence suppressing the short, audible transition (a real liability in live situation).

The possibility to use batteries instead of an adapter is also a good thing for those reluctant to adapters, but I haven't tested how long batteries last.

The "Backing track" and the possibility to import external files can be useful depending on the user's need, but it can't compete with pro backing tracks played on a CD or MP3 player or a guitar trainer such a s Tascam's GTR1 (which includes an efficient loop feature), which allow instant play of any music track of your choice.
Indeed, the way to transfer files through a computer is not very quick, and Ditto can only keep one track at a time. For mere backing track, one had better export their best Ditto-recorded tracks to their computer so as to be able to play them back later through a more versatile and convenient device.

The half speed feature can be used to provide violin-like or fast sounds, but prove less useful than a customizable speed rate which would allow analyzing a fast part.

The reverse feature is not something I use much, except for goofing with friends once in a while. A basic reverb or metronome would have been more useful to me, but that is not so important and it's just a question of taste.

The secondary features can be of interest for some, but as far as I'm concerned I essentially bought the Ditto for a basic use as a looper with a mono guitar signal. I use it in rock and jazz styles to work alone as well as in a band for some phases and analyzing some parts which are hard to set efficiently in rehearsal.

In a nutshell, I consider this device to have been cleverly conceived with high quality materials for a high-quality sound in the end. What more could we ask for?
See less
00
»