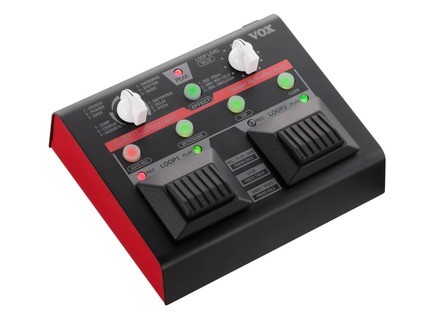 Plexus02's review (This content has been automatically translated from French)" With a small footswitch, it becomes very good!"

Vox VLL1 Lil' Looper
5
Good on the features, it's a looper (reproductive phrases) with:
- 2 separate tracks,
- 90 seconds total cumulative record on 2 tracks (that is good enough for most uses)
- Ability to overdub (record on the same track a sentence already registered, and it does not come included in the total recording time)
- The smaller, built-in effects (can only use one effect at a time, but it can be useful for effects that we will shortly use, rather than buy a pedal).
- Headphone jack, footswitch jack, possibility of a mode for voice microphone or guitar (or other instrument).
- Lack SD slot, it's a shame we can not record loops for our next session.

To use, I recommend going straight for a small surcharge footswich 2 tracks (just look footswitch compatible with Vox amps (at least the Valvetronix), and it will, for my part I have a Framus FRS2L, inexpensive and done very well).
This Footswitch give particular interest to the pedal, and will live use.

Another important point: READ THE INSTRUCTIONS. And yes, often hop was a new pedal and there, it happens to us all, we want to try it as soon as possible, and record it zaps. On a basic overdrive you say, it does not matter, turn the knobs and GO, but now NO! There are some "hidden" feature that can be very helpful and to be activated by pressing two buttons simultaneously. I think of how the footswitch function (effect control or control loops, it's your choice) and the independence or the slopes.

So why do I tan with this footswitch screwed from the beginning, is that without the pedal is not used live, as it becomes difficult to stop a track (make 2 quick blow to the foot when playing, it can quickly destabilize rhythmic level, we can remake a third without gaffe and it restarts the thing), and to remove a track, you have to press a small button "clear" not at all adapted to the foot. While with the pedal footswitch surcharge once the looper set (so the footswitch control loops and effects as a non leaving the factory), just a tap on the footswitch to track 1 stop the loop, and once stopped, another hit delete it (and to revive a blow on the looper pedal, and it is returned).

I never quite say it again, read the instructions, all things are well explained. It is even findable in pdf on the net.
And before buying, it can allow you to see how the foot works, and give you a good idea if it suits you or not.
The use is excellent from the moment the pedal is adjusted according to your desires.

Regarding the sound, the looper is transparent, and therefore even set trailing effects will not change the sound, which is a good point!

For integrated effects, they are more or less good. I am not convinced by the distortions and overdrives, but may be it is a matter of taste, that said, a little less "common" effects (delay, shutter ...) are not too bad and enough for me .
Ultimately, these effects are integrated to try, and you see according to your tastes (and your budget because a pedal solely dedicated to it will probably work better, but once again, it was not enough to buy 10 000 pedals).

The loop function transcribed good sound, so this is what is asked!

I use the looper with guitar mainly, but I've used it with a keyboard, bass and also with the voice, and the qualities are the same noise level (with some microphone for voice, it will still use the instrument in looper mode, otherwise the focus feedback!, but it will not impact on the sound, so no worries about that)

- Its transparent and well restored for loops
- Some cool effects
- Usable in any circumstance once and set with a footswitch
- It responds to the request of a looper being a little cheaper than some (even with a footswitch 20 €) and the effects more.

- It takes time to settle (it takes not half day either, about ten minutes this is done, the time to read the manual).
- No SD card to record its loops to put them on your PC, for example, or reuse later.


Short for all that it deserves 9/10, only with the footswitch (if there is no 7/10 because the use becomes less intuitive).

Hoping I could help you.

Vox VLL1 Lil' Looper
What are the effects or types of effects available?
Here we have a looper with two switches (2 channels recording) cashing loops 90 seconds max to infinity (even if it ends up being messy), and small effects like distortion 4, chorus, phaser, delay, reverb, bass sound, acoustics and its draft "radio", can not have an effect at once.

This is a digital looper.

The manual helps a lot for what is live loop recording without taking the head not need manual but once you start digging on the side of the metronome (fully customizable) manual is a good helper!

The effects are very good at what we can expect the effects of a looper (especially bass effect and acoustic effect, quite realistic and useful to play alone!). The loop function on it fills quite his job.

I use it mostly with my guitar and a Vox ToneLab ST, exit epiphone valve jr hot rod in a 2x12 fender or a microphone output in my external sound card.

I use it for several months, I had to submit a project work on loops tray music so I quickly bought a looper, the lil 'looper is what is cheaper and more comprehensive as my expectations, I wanted a not too small and pretty easy to use pedal (only loops and nothing else, no memory). I tried the boss loopers or jaman but there were too many possibilities for what I wanted to do.

The +:
easy handling, fast and intuitive
very useful bass and acoustic effects
the possibility to add switches (sold separately)
metronome with a headphone output and audio output without metronome (I swear this is useful!).
The object can operate in six batteries and it is quite handy, plus it does not consume too much.

The -:
The recording metronome is quite unsettling at first.
The fact that you can have only one effect at a time.

For about the 150th was a good creature, so I do it again this choice without hesitation or break your piggy bank to buy its big brother!