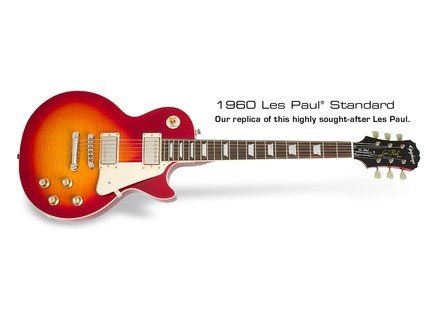 The guitar world is, broadly speaking, divided into two camps  the Fender camp, with Hendrix, Clapton and so on (subdivided into Strats and Teles, yadda yadda yadda): a world of bolt necks, single coil pickups and through-body stringing- and the Gibson / Epiphone camp, home of Slash, Gary Moore etc., home of the set neck, the humbucker and the stop tailpiece. East is east and west is west and all that, and never (well, seldom) shall the twain meet.

Into this bipolar fraternity comes the latest offering from Gibson subsidiary, Epiphone  the 50th Anniversary Les Paul. Listed at £590 RRP, at first glance this little puppy looks like a standard black Les Paul Custom, and as an avowed resident of the Fender camp, I must admit to a degree of scepticism over quite how much it justifies such a hefty price tag.


Blimey, all this talk and we haven`t even plugged it in yet. Right, here we go, then.

Oooh, this is lovely! Straight away, the neck and action feel just right, even to a committed Strat player  Wide, medium-low frets, low and smooth action, encouraging wide bends and vibrato a la Zakk Wylde without even a hint of choke, fast legato runs happening almost by themselves, and the minute camber lends itself to be played and played and played.

It`s a beautifully finished neck, too  the fingerboard and frets feel almost hand  rolled, more akin to my USA Strat than something I`d expect from a Korean-made Epiphone.

Crank the amplifier and cor, listen to the sustain on that! It really is spectacular, perfect for those Parisienne Walkways moments Clean, it lacks the clarity of a single coil Fender, but the humbuckers (generic Korean models) provide plenty of warmth and depth, with a surprising degree of note definition nonetheless.

Pile on the gain, though, and it`s fabulous. The bridge humbucker in particular really coming into its own, through both test amps (a Laney TT50 and a Marshall MG30DFX) it sounds like a guitar in the £900- £1000 price range. Still only three basic tones, but my, it does them well.


A couple of hundred off the price would be lovely, but not essential...

On closer inspection, certain details reveal themselves- the gold-plated truss rod cover, the unusually-shaped gold-plated machine heads (thankfully, the Anniversary has been spared the godawful plastic Kluson repro jobs that blight even hi- spec Gibsons)  and then you turn it over.

Inscribed on the back is a very attractive decal detailing a (very) brief potted history of the Les Paul and its place in guitar history. Doubtless some will dismiss this as a mere cosmetic marketing gimmick  and to be fair, they`ll have a point  but for my money, one of the big drawsand the design takes that and builds on it. of the Les Paul is its aesthetic appeal,


To sum up? Weeeeeellllll, I hate to say this about a one-trick posing machine, but it`s awfully nice. Awfully. It may be basic compared to what, say, Ibanez , Maverick or Parker can bring out for the same price, but for once, I`ve met a Les Paul I wouldn`t object shelling out the asking price for. Even without the doodle on the back.

A damn fine offering from Epiphone  for only £80 more than a stock Les Paul Standard, this is a far better instrument. Looks cooler, too.