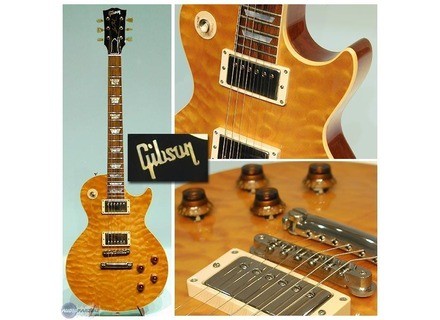 Gibson Custom Shop - Historic 1958 Les Paul Standard Quilted
4
Along side the flame maple top model was the quilted maple top. These guitars actually do sound a touch different as quilted maple is a slightly softer wood. In practice, however, you should really just get the one you think looks better. The guitar features a mahogany body with a maple top, mahogany neck with a rosewood fretboard, 22 frets, trapezoid inlays, pickguard, binding, hard tail bridge, two humbuckers, two volumes, two tones and a three way switch.

I wasn't a huge fan of the way the quilt was on this. It's a decent quilt, but it seems to really pale in comparison to, say, Tom Anderson's quilts. For as expensive as these are, I'd like to see a nicer looking quilt. Aside from that, the guitar is put together pretty awesome. There was a slight issue with the nut on this in that it had a slight burr on it on the G string. I fixed that up with one of my nut files and all was well. The fretwork on this was pretty top notch, so no issues there.

I'm not the biggest fan of the stock Gibson pickups, but I really don't like a lot of pickups that Gibson makes. The bridge pickup was pretty cool for that fat hard rock sound, but I'm mostly a metal player. I find that the lack of output is a bit limiting for my style of playing. You can definitely nail that Guns n Roses tone, however. The neck pickup has a bit of a treble bite, but it wasn't too bad, especially once you start lowering the tone knob. I just wish the neck had more output to help make soloing easier.

For the price of this guitar, the quilt was a bit of a letdown. It was maybe an AA quilt at best. There are better quilts on Tom Anderson and Suhr guitars. However, the guitar did sound decent, and it had some good resonance going on. Buy used if you want to save some money, but pay attention to fretwork.
Did you find this review helpful?yesno
»