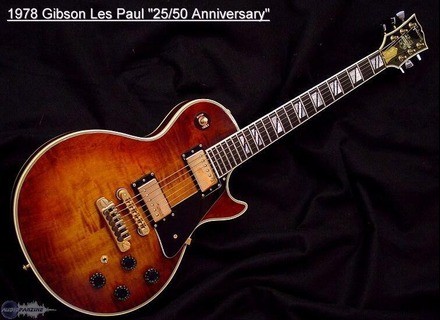 Gibson Les Paul 25/50 Anniversary
5
In 1978, Gibson created what I think is probably the ultimate Les Paul ever made -- the 25/50 Anniversary model. This is a Les Paul and then some. The features on this are ridiculous, and it sounds even better than it looks. The guitar has a mahogany body with a figured maple top, a five piece figured maple neck with an ebony fretboard, 22 frets, unique inlays, a special fine tuner bridge, binding, a brass nut, a pickguard, two humbuckers, two volumes, two tones, a three way switch and a coil tap switch.

Yes, this guitar had some wear on it with the finish. Yes, the gold plating was starting to pit. Yes, the frets were a bit worn. However, this is one of the best looking and best put together Les Pauls ever created. The guitar just felt perfect in every way. This was pre-chambering, and given the amount of maple put in this thing, expect it to be a bit heavy. The biggest complaint I have with this is that the upper fret access is weak, but that's the same with every single Les Paul out there.

This is the only category where I'm rating it down, and a lot of that has to do with the fact that I'm not a huge fan of the stock Gibson pickups. They work for rock, but I'm more of a metal player, and I find that I always reach for my trusty JB whenever I get a Les Paul. That said, they're still favored by quite a few guitarists out there. The bridge does that fat rhythm sound quite nicely, but the neck is a bit bright. I'm a fan of super fat neck pickup tones, so I tend to have to reach for the tone knob to get the tone I'm looking for out of these. The coolest features is the coil tap switch which gains some really cool coil tapped tones.

These guitars are extremely rare. They also go for quite a bit of money. However, I'm adamant that they're some of the best guitars that Gibson has ever made. The flame maple neck, the coil split feature, the figuring of the wood... Everything about this guitar is just about perfect in every way.

Cactus Deville's review (This content has been automatically translated from French)

Gibson Les Paul 25/50 Anniversary
5
Anniversary model made 3411 copies in the U.S. in 1978 and 1979 to celebrate the 25th anniversary of Les Paul and Les Paul for 50 years in the music industry.
Available in 4 finishes: tobacco sunburst, natural, wine red and black.
Mine is "natural" in 1979.
It did come with a belt buckle showing the logo of the 25/50 head.
It is equipped with 2 humbuckers single switchable via a small switch.
1 volume and 1 tone for each pickup.
3-position selector.
Bridge with "fine tuning".
The violin is beautiful, beautiful woods, including the reason for head abalone.
Table in maple and mahogany body. Varnish and beautiful and fine.
The handle is made of five parts, the ebony fingerboard with abalone benchmarks.
The fittings are chrome and gold.
The years have given him a beautiful patina.

The handle is pretty solid ...!
It's good big stick that holds well in hand!
It is not my favorite type of handle (I prefer those of the 335) but is still comfortable.
As for access to acute, well ... it's a Les Paul.
It better not be a back problem to play this guitar, it weighs about a ton!!
To believe that there is lead in mahogany.
Besides the weight, this guitar is well balanced to play sitting as standing.
I put 9 because of the weight.

This guitar is beautiful, I can not say it enough, but it is primarily meant to be played.
And there, it's great!
First, plug it into a good tube amp with just a little reverb.
Then, first the position single coil, neck pickup (the one I prefer): it is fluffy to perfection, great balance!
By varying the volume and tone knobs (very gradual) one can obtain a wide range of sounds. It's great for clean sounds that sound rich and loose hair with a little overdrive for blues is nickel. I really love the texture of the microphone.
Double switch position, and there is the heavy cavalry that arrived! The sound is wickedly thick, bold and powerful.
According to the pick attack, it is very easy to make cruncher (or not) the amp. With overdrive, it becomes énnnoooooooorme! It's the sound of Gary Moore blues big time! Take notes for hours.
Large loadings are not my thing, but I guess, views it delivers sound with overdrive, it also excels in this area.
Having a preference for soft sounds is round, I use mainly the neck pickup and middle position neck / bridge, but very few of the bridge pickup alone. But it is generally a matter of taste.

I bought it in 81 or 82, I do not know exactly 8,000 francs to Paul Beusher.
At that time I had seen on a Les Paul Artist, but I decided too late ... the beautiful was sold.
So I pulled on the 25/50, and frankly, I do not regret!
It was my first real electric guitar.
I went directly to a pale copy of Les Paul low end to it.
Moment of madness from a beginner guitarist!
This guitar sounds beautiful, round and full, and over the years, it is even more beautiful: the dark wood, the varnish made a beautiful patina, the nets were slightly yellow ... and his side reached prices that border on " anything "(I saw one at 5900 Euros pigalle).
I finally have a vintage guitar that has, moreover, viellii with me!
Even if I do play more often, it is always happiness.
It is above all wonderful for those who love the beautiful violin and it sounds amazing.
For those reasons (and others more sentimental), I'm not ready to part with this instrument!