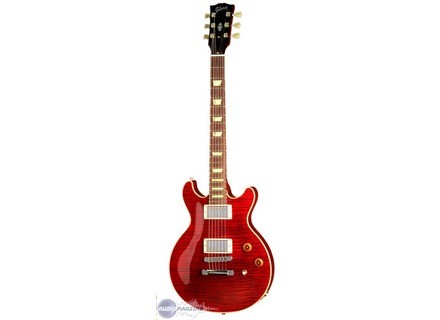 Gibson Les Paul Double Cut DC Pro
5
I absolutely love everything about this fine six string. It has been my everyday player for about 12 years now and I am still amazed by this thing. The only draw back is the notoriously fragile neck this thing has. I have personally cracked mine four times

Admittadly it was my fault twice. Anyways, I have had it professionally fixed everytime and everyplace I have taken it has done an amazing job. I couldn't even notice it was ever broken and it still played like the day I bought it. Unfortunately it was broken again recently and I haven't gotten it fixed again.

I just wanted to say that I love this guitar.


(Bonus awesome Gibson hard case that came with it.)
Did you find this review helpful?yesno
»

Gibson Les Paul Double Cut DC Pro
5
Made in the USA
Unlike what's stated on the previous review, it has 22 frets (as you can see in the picture), studio-type neck without binding, yellowish trapezoid inlays (yuk!), chambered mahogany body, but not as slim as a dc standard (without stomach relief cut). Very nice curly maple top with binding, three-way switch, one volume and one tone control, tune-o-matic bridge with stopbar.
Beautiful guitar, although the neck is only subpar aesthetically speaking.

The neck is nice for a Gibson (no it's not a Fender). The design is quite all right and access to the upper frets is okay (more so than on a dc standard). It's chambered, which makes it's pretty light, without being slim, so it's a good compromise between being too heavy and too light.
The controls available limit the possibilities (especially in the mid position), but they simplify things. It's easy to get a good sound.
Note: I replaced the strings with a 9/42 set, which is not typical for a Gibson. It's very nice, but not super precise.

Like a Les Paul, it's fine for any style of music.
It sounds less gloomy than a Les Paul single cut. The pickups are very exaggerated (but not in a bad way). The neck pickup is very dull (more than the one on my other Gibson Les Paul) and the bridge one is quite aggressive, but the overall combination is very well-balanced.
I love all the sounds of this guitar, except maybe the neck pickup with fat distortions, which isn't the best, except for solos.

I'm very happy with it. I got it secondhand. It doesn't have that mythical aura of an LP STD, so Les Paul maniacs will look at you with condescendence. However, it has its own personality, it definitely sounds Gibson but has a better overall design.
Its only drawback is more superficial: It has a nice body with binding but the neck has no binding and the inlays have a shitty mother-of-pearl color...It's a pity because it would be perfect without that.
Did you find this review helpful?yesno
»

pmilani's review (This content has been automatically translated from French)

Often described, rightly, as an intermediary between a Les Paul Standard and a PRS Custom 24.

I had long dreamed of (like many of us) to have a Les Paul but I was afraid with my carure Sparrow and my small hands, his two handicaps: the weight, which allows the inimitable sustain and handle great but sometimes thicker (eg 50).
The amount finally reunited so I presented in my favorite store and I had the opportunity to try my dream Standard and then, out of curiosity, a DC pro that I did not know.
I was immediately seduced by the comfort of play: the handle 24 cases in 60 Slim Taper Profile no introduction, plus it 's perfectly balanced in terms of weight and balance due to a relatively higher body lighter than the Les Paul Standard: this difference is due to the presence of cavities in Mahogany (chambered), double cutaway that removes a little material and even the transition from April to February knobs with electronics and less that follows.
Being more comfortable, I felt I played better and so that it sounded better than the Standard: hard choice, I had to play more extensively than the point probably stiffen the seller, from the ever- DC Standard. No way to make a mistake: given the price anyway, it would be a huge regret!

But all things considered, the DC pro is more comfortable, really good (mine is translucent red) plus a little cheaper: only the sound could make a difference.
After hours of testing, I could not hear a difference between the Standard frankly sensitive and DC pro. It is clear that they are in the same register of sound: the sound Les Paul.
To put what I'm saying that I add:
- I'm not a guitarist or an expert-class (the average)
- A test store is not worth a try in the studio
- The undeniable comfort of the DC allowed me to play better.
But still, it is likely that the Standard has a little more sustain but it gives its sometimes a little (too) fat, while the DC has a pro's probably more "dry" while being more accurate with a lot of grain.
In conclusion I would say that the sound is very typical Les Paul, and that the body is a little less heavy and large notes are more parts and more accurate.
The pro Burstbucker it is equipped (such as IM59A sleeve, and type in IM59B bridge) fulfill their roles beautifully and gives it sounds quite modern and versatile: I play everything on cete scratch: rock, jazz blues Of course but also I even accompanied me to sing solo stuff. I never tried to play metal but with a proper amp I think it can.
Personally I play with a Fender Twin Amp: and the agreement is majestic with the DC pro.

In conclusion I would say that DC Pro is a perfect balance in sound between round and sharp enough so versatile. But his greatest quality is the ease of playing and for me it is very important.

Since I became quite unconditional Gibson DC, I have had the opportunity to buy one more CD and I took it without hesitation: it is a little different (490 and 498 pickups, classical LP and even lighter, thinner body than the DC Pro), great also in a different register, but that's another story
The only criticism we can probably do at DC Pro, but also to pay the ransom for his relief is the fact that there is only one tone control and volume control for both microphones: this can be annoying to some, personally it does not bother me especially as the tone control is very effective.
One hesitates a long time between Pro and Standard DC especially as the Standard is a true and beautiful legend, but I do it again the choice of the DC pro (especially for comfort).