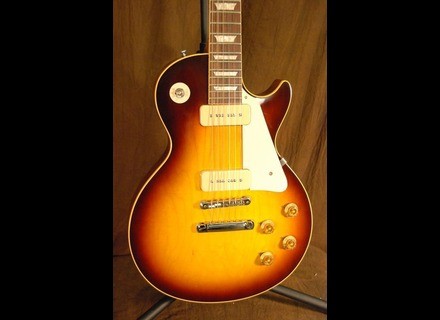 Gibson Custom Shop - Historic 1956 Les Paul Standard Reissue Darkburst
5
The Gibson Les Paul guitar is a fat sounding thick and aggressive sounding guitar. The voicing of it is very rich and smooth but they're extremely thick and almost misguided. What I mean misguided I mean it as an aggressive tone that is great for hard rock and metal music. There's nothing about this instrument that is built to the guided but it is just that angry raunchy tone that is perfect for aggressive style guitar playing.


This guitar features two P90 pick ups two volume control knobs and two tone control knobs. It also has a three way pick up selector that allows you to pick up pick each pick up individually and in the space in between each to humbucker pick ups. It doesn't have a whole lot of features compared to some of the new modern builds with different push pull activation on different pickups and different boosts but it's a pretty basic guitar and it doesn't tear off of the beaten path too much.


The tone of this is very thick and warm. It is great for distortion sound so if you have a high gain amplifier or even a moderately high gain amplifier you to get some great thick hard rock and metal tones. If you use a classic sounding cleaning up such as a fender twin reverb or something like that. Can you give me get a beefy clean tone that's not a sound very bright but could be really warm and round and nature. Overall this guitar is an exceptional guitar with resounding tone. It has a great feel and if you like warm tones then you're going to be in business with this guitar.


I highly recommend a Les Paul guitar to anyone is looking to get a really beefy guitar for recording or any type of digging. It's a fantastic sounding guitar but they are kind of expensive in this price range you can certainly find these guitars in the used market pretty easily so I suggest trying that out before buying one new because it Gibson Les Paul guitars tend to be hit or miss sometimes from guitar to guitar. See you can play one and I feel good and play another one that is the exact same build and not feel quite right. I was recommend playing a Gibson Les Paul first before buy.
Did you find this review helpful?yesno
»

Gibson Custom Shop - Historic 1956 Les Paul Standard Reissue Darkburst
3
This model is a modern Custom Shop replica of an important transition model in Gibson history. This model represents them switching over to a more modern design. This guitar is part 1955 and part 1957. This guitar has the tune-o-matic which was the future of the Les Paul, but with P90s which represent the past but were still more than adequate at that time and even now. This guitar has a mahogany body with a maple top. The neck is a set in mahogany neck in the 50s profile. The fretboard is rosewood with 22 frets. It has a set of Kluson tuners up top with the aformentioned tune-o-matic down at the bottom. The pickups are P90s as I have mentioned. The controls are typical with a volume and tone for each pickup and a 3 way toggle on the upper bout.

This guitar feels like it was made in the 50s. It has a very big neck which provides a very vintage feel. Les Pauls do not have very good upper fret access but this is a normal trait that Les Paul users have had 60 years to deal with. This guitar being based off of a 56 model is technically better than the earlier models because this was the first year for the tune-o-matic bridge, a design which is still used today. This replaced the wraparound bridge and it provides much better intonation. Gibson Plek's their high end guitars. This means the guitar is placed in a machine and the machine does all the fretwork and leveling for the guitar. This machine uses a laser to get the frets super accurate so these guitars come with a great setup right from the factory.

P90s are great pickups. They came out right before the PAF so people forget about them usually. I find them more usable than PAF's in a lot of applications. While PAF's are super smooth the P90 has a lot of single coil bite. The PAF can get muddy in some situations but the P90 with its single coil high end bite retains clarity in a lot more situations. The P90s give out a bitey single coils sound but unlike a strat there is plenty of low end to balance it out. It kind of sounds like a fat strat with the humbucker and middle single coil on. You get the thick bottom end with a crisp clear top end from the single coil design.

If you are a collector or really rich player and are looking for the oldest Les Paul design that still has modern features this is the guitar. It is right in the transition between early 50s Les Pauls and the more modern Les Pauls that we still have today. It has the early 50s P90 tone but with the modern style bridge setup which is nice and keeps tuning well. These guitars are pretty expensive and if you are just looking at one for the tone there are much cheaper P90 Les Paul options.
Did you find this review helpful?yesno
»

Gibson Custom Shop - Historic 1956 Les Paul Standard Reissue Darkburst
5
During this time, it was pretty much solidified that Gibson would start using the tune-o-matic bridge/stop tail piece on their guitars from here on out. The guitars still had some P90s around this time, but they were slowly being phased out for humbuckers. The guitar features a mahogany body with a maple top, mahogany neck with a rosewood fretboard, 22 frets, trapezoid inlays, pickguard, binding, hard tail bridge, two P90s, two volumes, two tones and a three way switch.

This particular guitar didn't weigh a ton, and I found that to be a good thing. To me, heavy Les Pauls can be more dead weight than anything else. Instead, I listen for overall resonance and how clear they sound. This one had that in spades. The nut was cut pretty good, so no problems there. The overall fretwork was great, but I couldn't slam to action to really test how level they were. I also didn't have any of my fretwork tools with me at the time. Regardless, Gibsons at this high level tend to be top notch, so there shouldn't be too many problems.

The P90s in this were awesome. The bridge P90 was totally killer for that blues tone. I put it through both a Fender and a Marshall. In the Fender, the clean was to die for. Once I hit the tubescreamer, it gave this killer blues solo sound that just sang for days. Through the Marshall, I was able to get an awesome hard rock tone going on. Through the right amp, you can even play metal with this, but it's not something I'd exactly recommend. The middle position was pretty useless, but I find that to be standard affair for these guitars.

The P90s in this guitar were to die for. They had some of the craziest tone that I've experienced in quite awhile. If you've never tried a P90 before, definitely check this guitar out. They can even be used for leads. Hell, Kirk Hammett of Metallica is known to use P90s on certain lead sounds, so if he can use it for metal, I'm sure you can find a way to use it.
Did you find this review helpful?yesno
»