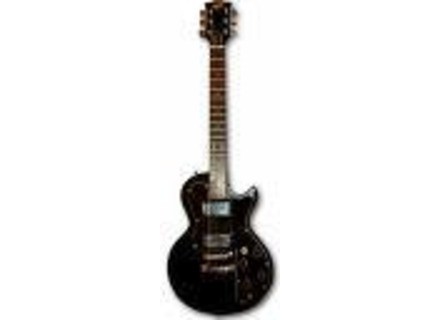 Gibson Sonex 180 Deluxe
4
The Gison Les Paul Sonex 180 is the true tone of a Les Paul really shines through with the new version LPS WORN Maple Top over mahogany body. I had been looking at this particular Les Paul for quite some time. Glad I waited since all of the new Worn models now have a maple top … for the same exact price as before. The Maple Top in worn cherry looks great and feels great, I get a lot of compliments when people see me with this.

I still lean towards playing my beautiful Olympic White American Special Telecaster that arrived a few weeks ago from guitar center. However, the different sounds that I can get out of this Worn Cherry Les Paul Studio are really very nice. I basically play the blues, everything from BB to Clapton to Stevie Ray Vaughn.

My American Highway One Strat and My American Special Tele take care of the Clapton and Vaughn blues sounds, but now I can really play a lot of other Gibson-playing-style blues artists more effectively with the Les Paul. Sounds great, plays great and allows playing some really heavy stuff too for the fun of it! Great smokey and raw to crystal clear sounds come out of my tube amp with this Les Paul hooked up. This guitar even has a great sound unplugged … and sustain is just awesome on this Les Paul.Sounds GREAT!

I have made the mistake of ordering this guitar via some site online. Once I returned the guitar that was shipped to me. The other company’s guitar arrived dirty, fingerprints all over and I swear it was a demo or a return pawned off as new! Sent it back and got a nice shiny one!

If you are looking for a Les Paul Studio with the true sound of a Les Paul Maple Top at a really great price... ORDER THIS LPS MODEL!

Gibson Sonex 180 Deluxe
5
The Gibson Sonex 180 Deluxe is an electric guitar that was first made in the early 1980's and ran in production until the mid 80's. The guitar isn't actually a Les Paul, but does have the same body style and is clearly somewhat inspired by the Les Paul. The guitar has 22 frets and two humbucker pick ups, which are the same pick ups that will be found in Les Paul guitars that were made around the same time. I don't know what this guitar is made out of or what country it was made in.

The Gibson Sonex 180 Deluxe is a pretty easy guitar to play, with a nice round neck that is easy to get a grip on. The model of the Sonex 180 Deluxe that we have at the studio where I work is tuned in a unique open D tuning, so it's got a really thick gauge of strings on it. This definitely gives it a different feel than it would normally have, so it's hard for me to comment too much on the original feel of the 180. Beyond the neck and feel of the guitar, it's got a three way pick up selector switch and tone and volume knobs for each of the two pick ups. This guitar is also pretty heavy!

The Gibson Sonex 180 Deluxe is overall pretty cool sounding, but definitely don't expect the super milky tone you'd get with a Les Paul. It does have a pretty thick sound, which translates well for playing both lead and rhythm parts. As I mentioned earlier, the Sonex 180 Deluxe that I'm familiar with is kept in an open D tuning, so the style that I play on it isn't much like what I'd do on a standard tuned guitar. While it's possible to get a few different tones with the two pick ups, it definitely isn't the most versatile electric guitar out there. I've used the Sonex 180 Deluxe primarily with a Fender Super Reverb for recording in a professional studio.

At the time the Gibson Sonex 180 Deluxe came out, it was a poor man's Les Paul, but for those who know about these guitars, it's considered a gem. I wouldn't choose this guitar over a Les Paul, but it's definitely a nice color to add to the mix in a studio setting. There doesn't seem to be too many of these out there, so I don't really know what the going rate would be for a used one. If you do stumble across one in your travels, it's definitely worth taking the time to check it out.
Did you find this review helpful?yesno
»