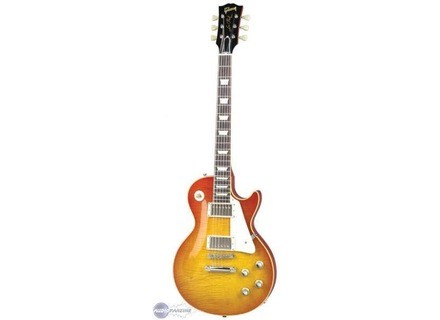 Gibson Custom Shop - Jimmy Page Signature Les Paul
5
Jimmy Page is probably the number one guitarist I think of when I think of Les Pauls. He's been a player of Les Paul guitars since before I was born, and he continues to play them to this day. The guitar features a mahogany body with a maple top, mahogany neck with a rosewood fretboard, 22 frets, trapezoid inlays, pickguard, binding, hard tail bridge, two humbuckers, two volumes, two tones and a three way switch. The guitar also has some push/pull switches going on for extra tones.

These guitars are pretty cool in that they're packed with features. I'll get to most of them in the sound section, but the push/pull pots that Gibson uses generally have a nice and positive feeling to them. Sometimes lower end Jacksons will have the entire knob pull off because of how awful the push/pull pot is, but I never experienced that issue on these models. The fretwork was great on this; there were no sharp edges that slice up your hand, and the frets were perfectly crowned. The nut itself was cut nicely, too.

This guitar is crazy versatile. First of all, the pickups in this are pretty cool for that vintage kind of vibe. Plug into a Marshall or Vox, and you got that great hard rock tone in spades. The bridge has some nice bite to it, but it isn't overly bitey. The neck had some bite to it as well, but I was able to get a smooth lead tone by backing off of the tone knob a bit. The real cool stuff happens once you start messing with the push/pull knobs on this. There are tons of tones to be had with this guitar, and I find it to be one of the more versatile Les Pauls that Gibson offers.

This is one of the more versatile guitars that Gibson offers. The whole push/pull pot setup on this allows you to get tons of different tones. The biggest issue with this is that it costs quite a bit of money. If you can afford it, I say go for it. If you can't and are good with a soldering iron, there are better options out there for you. I'm sure the fanboys will have no trouble buying this, however.
Did you find this review helpful?yesno
»